A Quintet of Quick Questions for the Queen

Dana Elaine Owens, aka Queen Latifah, was born in East Orange, New Jersey on March 18, 1970. Soon after launching her showbiz career as a human beat-box for the rap group Ladies Fresh, she struck out on her own, releasing All Hail the Queen in 1989, the first of her half-dozen solo albums thusfar.

Latifah’s film career followed two years later, starting with a supporting role in Spike Lee’s Jungle Fever. She’s since added about another forty acting credits to her resume’, including an Oscar nomination for Chicago, and appearances in such diverse productions as Hairspray, House Party 2, Bringing Down the House, Brown Sugar, Barbershop 2, Beauty Shop, Taxi, Last Holiday, The Perfect Holiday, and The Cookout. 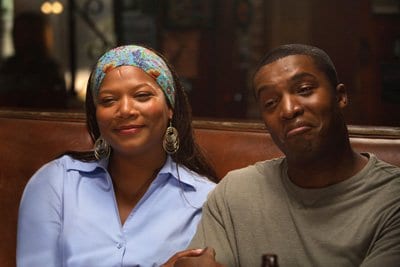 She was recently awarded a Golden Globe for her stellar work in Life Support, a made-for-TV movie chronicling the real-life struggle of a crack-addicted, HIV+ single-mom, thereby shedding light on a seldom examined plague taking a devastating toll on the black community. Upon winning the award, Latifah said, “I am so thrilled. Thank you to the Hollywood Foreign Press Association… Life Support is such an important film which addresses such important issues and I’m so proud to be recognized for my work in it. I only hope that the film helps in our fight against AIDS and HIV. My partner Shakim Compere and I were so passionate about Life Support that we signed up to produce it and never imagined it would go this far. So, thank you to the HFPA, HBO, Nelson George, Shelby Stone, Jamie Foxx and the entire cast.” 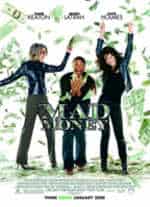 Here, she talks about her new film, Mad Money, a crime caper co-starring Diane Keaton and Katie Holmes as employees of the Federal Reserve Bank who conspire to steal millions of dollars in currency about to be destroyed.

KW: Tell me a little about your character, Nina Brewster.

QL: Nina is a mother of two, and she works at the Fed shredding money, all day, every day. The way she kind of gets involved in this plot is that she really desires to send her sons to a better school than the one in their neighborhood, and to just have them live in a better place in general. And that’s sort of the pressure and the enticement that Bridget’s character [played by Diane Keaton] uses to get her to be involved in it.

KW: Were you familiar with the fact that the Fed routinely destroys old bills?

QL: I don’t know if I ever have just consciously thought about money in the sense of the process that it goes through. I only assumed that they had to destroy some. I knew that they must destroy money, because they create new money. You couldn’t just put that new money into circulation without throwing off the entire economy. So, yeah, I did realize that they had to get rid of all that ripped up, beat up, dirty money somehow. Would I want to do that for a living necessarily? Nah.

KW: How was it working with Diane Keaton?

QL: It has been a blast. It’s been a lot of fun. I’ve been a fan of Diane’s for a really long time, so just to be able to work with her and watch her do her thing was amazing. Her energy is just unbelievable, and her skills. And she’s just fun to watch. And Katie [Holmes], too! Katie gets to play this crazy, aloof character [Jackie] who wants my character to have lots and lots of sex, which is always fun, because she really cares. It’s not that she’s being nasty or throwing it out there for shock value, she really cares about it and wants my character to be happy. It’s funny. She does have some of that free-spiritedness naturally, so it seems only right that she’s the person that plays this role.

KW: How do these three women feel about the crime they’re committing?

QL: I don’t think they really get into the economics of it all. The only one who seems to think about it is Don [Bridget’s husband, played by Ted Danson] But in their minds, obviously, this is not enough money to really make a big splash. It’s found money. It’s not going to exist after they destroy it. Who’s getting hurt? They figure this is like a crime that’s not really affecting anyone. So, why not?

KW: Does the money make a difference in these women’s lives?

QL: For my character, Nina, for sure. She has some really basic things that she needs to happen in her life. She needs to put her sons in a better position so that they don’t get caught up in the traps of growing up in the ‘hood, which is where they live. So, her being a caring parent, that’s her desperation. But once she doesn’t have to worry about that anymore, you get to see her flourish

You get to see her have a personal life and be a woman, and just enjoy the company of a man. And just kind of come out of her shell. Money helped that happen. It doesn’t sustain it. Once you get going, you still gotta do what you have to do. But it did help.