A recent grad of the acting program at the prestigious Juilliard School, Nicole Beharie made her screen debut just last fall in The Express, a bittersweet bio-pic about the abbreviated life of Ernie Davis, the first African-American recipient of the Heisman Trophy. Now, in just her second film, the promising young thespian has already handled her first leading role.

In American Violet, a riveting drama based on a real-life case of racial profiling and malicious prosecution in a tiny Texas town, she plays a single-mother of four falsely accused of dealing drugs. Here, the emerging ingenue reflects upon her work in the movie which co-stars Alfre Woodard and Charles S. Dutton. 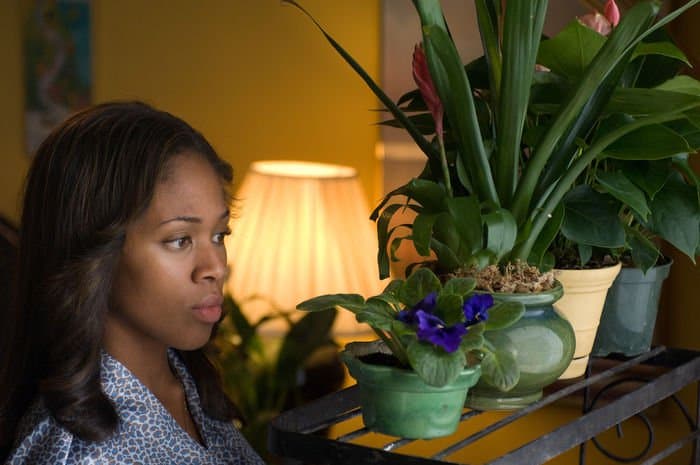 KW: Thanks so much for the time.

NB: I’m grateful that you wanted to speak with me.

KW: The honor is all mine, after I witnessed what a superb job of acting you did in this film. What interested you in the role?

NB: This particular script moved me. I had a dream about it, and when I went in for the call back, I met with the director Tim Disney, and the writer Bill Haney. When they told me about their investment in the project and Regina Kelly’s actual story, and how she had cooperated with the ACLU, I was just moved by them as human beings. I knew right then and there that I wanted to collaborate with them in some way. I told them at the second audition that if they didn’t want to cast me as the lead, I was willing to play another part because I cared that much about the story. But the audition went well, and things worked out in my favor.

KW: Did you have a chance to meet the woman you were portraying, Regina Kelly?

NB: Of course I got to spend a lot of time with her, although we didn’t get to meet until on set. I also got to spend time with numerous people from the town in Texas who had gone through the raids, characters you see in the film on the periphery.

KW: How did she react to seeing her life story being made?

NB: I think she was probably a little bit nervous initially watching me be her, wondering who is this girl who doesn’t even look like me.

KW: Was she really a single-mom with four children?

NB: Yes, she has four daughters the same ages as the girls in the film, the whole nine yards. Most of the story is pretty accurate.

KW: Does she still live in Hearne, Texas?

NB: She recently moved, but they did a screening of the film in Hearne a few weeks ago, right across from the District Attorney’s office. 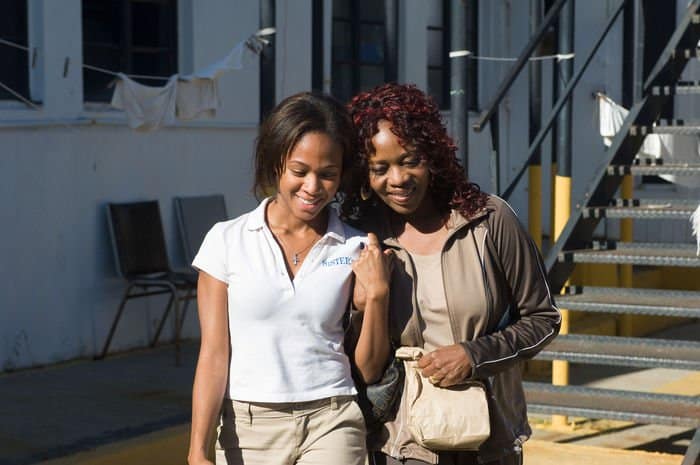 Behold the Beauty of Beharie

KW: Where did you grow up?

NB: I was born in West Palm Beach, Florida, and spent time in South Carolina and Atlanta. I did a lot of moving around because my father was in the foreign service. So, I also lived in Nigeria, Panama and Washington, DC. I was up and down the East Coast, and in a few random countries. [Laughs]

KW: When did you develop an interest in acting?

NB: Moving around all the time, you just have to keep yourself entertained. And I was kind of a bully, even though I’m tiny, 5′ 2.” As a child, I’d boss other kids around and dress my little brother up, just putting on shows, singing and dressing up. I recently found a photo of myself in front of my mother’s closet, trying on her nylons and a feathered boa. So, I think storytelling was always underneath my skin, burning to get out.

KW: What type of training did you get before Juilliard?

NB: When I lived in Orangeburg, South Carolina, I ended up attending a school for the arts in Greenville. It was a better school and a better situation. I guess my ticket to get in there was acting. I wasn’t planning on becoming an actress. I just wanted to go to a better school. But I fell in love with it, and my senior year I applied to Juilliard, NYU, Carnegie Mellon and other schools with theater programs. I got in, took the risk, moved to New York and it kinda worked out.

KW: I guess you did a lot of Shakespeare at Juilliard.

NB: I loved doing all the plays, including Shakespeare, which is wonderful for honing your instrument. I wouldn’t say Shakespeare was my #1 favorite, but you do feel very alive when it’s done well. Being in front of the camera is nice, too. I think they’re both beautiful types of performing calling for different levels of energy. I also enjoy singing in musicals.

KW: Watching American Violet, I though I saw another Juilliard graduate in the cast, Anthony Mackie, playing the informant, but his name wasn’t in the credits.

NB: Yes, he and Tim Blake Nelson, another Juilliard grad, are both in the picture.

KW: You had a great supporting cast, incuding Alfre Woodard, Charles S. Dutton, Will Patton, Xzibit and Michael O’Keefe. How was it working alongside so many seasoned pros?

NB: It was daunting. I was constantly reminding myself that they did cast me. I remember being nervous out of mind during the first reading. I love acting and I’m always doing readings, but this time, I knew the stakes were high. And after working with them, I took away so much from the experience because everyone was so generous with me. Michael reached out to me. Will took me to see some independent films. And Alfre was an absolute jewel.

KW: Well, I think the camera likes you, you have a natural chemistry and powerful presence. I noticed you the first time you came on screen in The Express. I sort of thought, hey, who is that?

NB: Thank you. I skipped my graduation at Juilliard to do that film.

KW: Your debut was the scene when you walked into the party with a girlfriend and the two of you were introduced to Ernie Davis.

NB: Wow! You’ve got quite a memory.

NB: That’s an awesome question. What do I want you to ask me? Hmm… I’ll have to think about that.

NB: Yes, I think this whole process has you constantly facing your fears and being courageous. But it’s also exciting.

NB: Yeah, I’m really enjoying my time, and my family is really excited for me. I was raised by a single-mother, and my sister was a single-mom, too, so I think that’s one of the things that help me understand my role in American Violet. And having them see the fruits of my labors is really exciting. I just feel really blessed and humbled, even that you want to talk with me right now.

KW: The music maven Heather Covington question: What music are you listening to?

KW: One of her songs is in the movie at the end.

NB: Yes, and I didn’t know that when I first saw it. That thrilled me. That made me so happy. It was so perfect. Besides Nina Simone, I have some Common going on, some Joni Mitchell, and Beyonce’ when I’m working out.

KW: What has been the biggest obstacle you have had to overcome?

NB: After my grandmother had a heart attack and all my relatives came back home. We did everything in our power to lift her spirits, and it did something for me too. My sister absolutely cracks me up. I was rolling on the floor.

KW: How is your grandmother doing now?

NB: Much better, thanks.

NB: By just giving me a chance. I’m new. I don’t know that I have a fan base yet.

NB: As an ever-changing person, like the weather and the seasons. I want to have room to grow and morph and learn as I’m figuring it all out.

KW: Have you thought about a question no one ever asks you, that you wish someone would?

NB: Yes, It’s sort of abstract, but I would like to get creative feedback at www.MySpace.com/NicoleBeharie about the film in the form of words, music or any other artistic expression from people who have seen it.

KW: Well, Nicole, thanks again and best of luck in the future.

To see a trailer for American Violet,