Though it’s got nothing at all to do with the big election year coming up, it should be no secret by now that Nicolas Cage is going into politics – sorta – for his latest excellent adventure in the movie National Treasure: Book Of Secrets. Cage was on the tight-lipped side during this interview, about spilling the beans when it comes to any big secrets in this new sequel. But his latest global treasure hunt definitely has something to do with Abraham Lincoln’s assassination, the diary of John Wilkes Booth, and a skeleton or two in his character Ben Gates’ mystery closet. Cage also mulled the joys and responsibilities of fatherhood, getting back together again in a movie with legendary Uncle Francis Ford, and making up his mind about a goose on the Christmas menu. 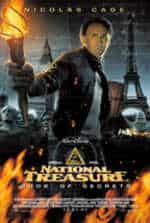 You’re not known as a sequel kinda guy, so why now with this movie?

NICOLAS CAGE: I never like to repeat myself! But in this case, I do believe that if you’re going to do a sequel, it has to promise to be better than the original.

And I wanted to make sure that we could go in a direction that would raise the stakes, and also hopefully be more interesting. When they first presented the idea of the Civil War, Confederate gold, John Wilkes Booth and the Lincoln assassination, right off the bat for me personally, I was excited by that.

Then they said, we have to rachet it up from stealing the Declaration of Independence. So we thought you should kidnap the President. And I’m like whoa, hold on. How is Ben Gates going to kidnap the President of the United States? And I got nervous.

Then I started thinking about it, and I started laughing. And I realized that was the joy of it, that it was funny and it was absurd. And if John Turteltaub has a genius, it’s that he’s made movies without a gun that are entertaining, and where you can take the whole family.

There’s worse things to do than to inspire especially the youngsters, to look in their history books. So I thought, let’s go. Let’s do it. So I did it, and I’m happy I did it.

What’s it like having a whole new collection of young National Treasure fans?

NC: Children to me, are of the utmost importance. They’re really the future, aren’t they? So I want to treat that carefully. I’m always thinking about the kids, if I make that sort of movie.

So how is Ben Gates new and different these days?

NC: I think the weight has been taken off the character. He’s been accepted academically. He’s not considered a wacko anymore, like he was in the first movie.

Has Ben Gates changed your life?

NC: Because of playing Ben Gates, I really appreciate history now. And I also enjoy being in places where I feel the weight of past events. And if you use a little imagination, you can time travel.

Your uncle Francis Ford Coppola just came out with a time travel movie, Youth Without Youth. Will the two of you ever work together again, after Peggy Sue Got Married?

NC: Yeah, it’s been a long time. If he called, I would certainly like to work with him. And I’m happy to see that he’s behind the camera again. I wrote him an email recently saying, the world needs more of your movies!

What has it been like for you, being a dad?

NC: The main priority is just making sure they’re happy as much as possible. That’s the job, make them as happy as you can possibly make them. Because we know as they get older, things start happening.

You know, there are pressures and hormones, and all of that. So it’s about how happy can you keep them for that wonderful, magical period of time.

What are you doing for Christmas?

NC: This year I’m going to do something new, we’re going to have a Dickens Christmas. I’m going to take everyone to England. I’ve never done that. I’m going to walk around and just see how they celebrate the holidays, because I’ve always fantasized about that.

Will you have a Christmas goose?

NC: I’m going to try to have a Christmas goose. Absolutely!