“Skyfall”-ing for the New Bond Girl

Naomie Harris was born on September 6, 1976 in London, England where she was raised as an only child by Lisselle Kayla, a single-mom and TV scriptwriter of Jamaican extraction. The accomplished young actress has already made a name for herself in film, television and theatre, and just completed production on A Long Walk to Freedom, a biopic in which she portrayed Nelson Mandela’s wife Winnie.

She recently starred at the National Theater in London in Danny Boyle’s production of “Frankenstein,” and was last seen on the big screen playing a grammar schoolteacher who fights for the right of an 84 year-old Kenyan to be educated in The First Grader. 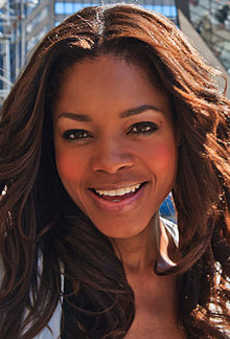 Naomie’s breakthrough performance was back in 2002 in Boyle’s 28 Days Later and she went on to receive further acclaim for her role as ‘Tia Dalma’ in Pirates Of The Caribbean: Dead Man’s Chest and Pirates Of The Caribbean: At World’s End. Her other major feature film credits include Miami Vice; Tristram Shandy: A Cock And Bull Story; Street Kings with Keanu Reeves and Forrest Whittaker; and Sex & Drugs & Rock & Roll.

On television, she’s starred in the BBC’s “Small Island” and “Blood and Oil” and in the UK’s popular television adaptation of Zadie Smith’s bestselling novel “White Teeth,” the adaptation of the novel “Poppy Shakespeare,” as well as “The Project.” Naomie graduated with honors from Cambridge University with a degree in social and political science prior to training at the prestigious Bristol Old Vic Theatre School.

Here, she talks about her latest outing as a Bond girl opposite Daniel Craig as 007 in Skyfall.

KW: What’s it like to be a part of such a storied, classic franchise? Were you at all intimidated?

NH: It was intimidating in the beginning, for sure. I was really nervous, because I was certain it was going to be bigger than anything I’d ever done before. But I was relieved when I actually discovered that there was a family atmosphere on the set, with a brother-sister team, Barbara [Broccoli] and Michael [Wilson] running it all. They’re incredibly down-to-earth and really warm, so it was like making a little independent movie most of the time. That was quite surprising to me, because I’d expected it to feel huge. But it didn’t at all. It felt quite intimate.

KW: I loved you in Ninja Assassin, which was an action-adventure that might have served as a preparation for Skyfall.

NH: Yeah, in some ways, except that in that movie I was mostly screaming and running away from the bad guys, whereas in this one I’m generally jumping into the action and fighting with them. So, yeah, it was somewhat similar, but also very different.

KW: I have a lot of questions for you from fans. Documentary director Kevin Williams asks: What was the audition process like for such a physically demanding role?**

NH: No, it wasn’t, at all. Sam [director Sam Mendes] did say the role would involve a lot of action, and asked if I was okay with that. Of course, I said, “Yes!” because you’d say “Yes!” to anything auditioning for a Bond film. But I didn’t realize just how much physicality was going to be required of me.

KW: How demanding did it turn out to be?

NH: I did more physical preparation for this, than I’d ever done for any role. I trained for a couple months. I was out on the shooting range twice a week. I worked out with a personal trainer for two hours a day, five days a week. So, it was quite demanding!

KW: April Hughes asks: What was it like working with Daniel Craig?

NH: I really enjoyed working with Daniel, because he’s a brilliant actor at the top of his game. That gave me an opportunity to learn from the best, which is what you’re always looking for as a performer in order to grow and get better at your craft. It was also great because he was so nice and incredibly supportive, because it really was an intimidating experience for me. He sort of held my hand and said, “We’re in this together and we’ll get through it together.” And he did look after me.

KW: And how was Sam Mendes as director? He won an Oscar for American Beauty, but he’s never made a movie like this before.

NH: Yes, it was a really departure for him, and it was fantastic working with him precisely because of that. What interested him is characters and relationships, and he was a genius at giving you the freedom to create the type of character you want, and also to explore and have fun with your fellow actors. For him, characters and relationships are really the heartbeat of the film, and then the action is the backdrop. By developing the characters, he makes you care that much more about the action and going on a journey with the characters. People are already describing it as the best Bond flick ever, and I really think it will be. *

KW: Larry Greenberg asks: Growing up in London, did you ever think you would be a secret agent in a Bond film?

NH: I never ever thought that I would be in a Bond film, ever, which is weird because I grew up loving these amazing movies. But I never thought of it as a possibility, because there aren’t very many black Bond women. So, it never occurred to me. But I’m absolutely loving being part of it, and that not only am I a Bond girl, but I get to be an agent as well. *

KW: Harriet Pakula Teweles asks: How do expect being a Bond girl to affect your career?**

NH: I definitely think it will affect it positively, because it means that now I’m much more visible to a wider audience. Directors and studios in particular are a lot more interested. So, I expect it’s going to have a very positive impact on my career.

To see a trailer for Skyfall: