Of the twenty five freaky films offered at the Monster Movie fest, we’ve looked at two Larry Cohen pictures, twenty three to go. Well obviously we can’t go into all of them, so here’s a quick rundown before we take a closer look at another.

Monster Pictures, the Australian film distributor that brought the Human Centipede franchise to our screens, is the organiser of the Fest. Neil Foley of Monster pictures said, “The program is a culmination of a year spent searching for the coolest, edgiest and most uniquely twisted films on the planet. We’re sure we’ve got them too, twenty-five of them in fact, you won’t be disappointed!”

With a line up like this, the regrets will be for those who didn’t get tickets and unfortunately those who were looking forward to watching Father’s Day, a Canadian comedy/horror that was pulled from the festival as the Australian Government Classification Board refused to classify the Picture. The British Board of Film is ordinarily more conservative, and classified Father’s Day as 18+.

Father’s Day tells the story of a one-eyed vigilante named Ahab who sets out to stop the murderous rampage of a psychopath dubbed “The Father’s Day Killer.” Incidentally, it won ‘Best Feature Film’ and ‘Best Director’ at Sydney’s Night of Horror Film Festival.

Neil Foley said this of the Decision, “This is an outrageous decision, yes Father’s Day is an edgy film, but it is an hilarious and over-the-top spoof that, despite its gore, is actually one of the sweetest films in the Monster Fest program!”

Dean Bertram, director of the Night of Horror Film Festival said, “This is yet another example of the draconian censorship in this country. Laws that restrict Australian adults from viewing legally produced materials that are freely available in the rest of the world are an embarrassment and need to be overhauled immediately.”

But the show must go on; also screening at the Monster Fest is Hundra, the wonderful sword and sandal epic. Joining Lauren Landon, the star of Hundra and countless Larry Cohen pictures, at the ‘Night of the Women’ is none other than the mistress of darkness herself, Elvira. This is a real treat as Cassandra Peterson hardly ever performs as Elvira these days.

That is just a teensy taster, for the full program of events, star guests and how you can become the Monster Fests Queen of horror, go to www.cinemanova.com and to view the teaser-trailer go to http://www.youtube.com/watch?v=2DsP3jG-788.

Then we have the Night of the Irish. Pictures screening include the Irish monster film Grabbers and The Inside directed by Eoin Macken. I interviewed Eoin on his movie and his thoughts on being asked to the Monster Fest.

The Interview With Eoin Macken

How did you feel to be picked for the Monster Fest?

Eoin: “I felt really privileged, because Monster Fest has some really great films and there are a couple that I want to go and see. When I was asked, I was really excited about it, and I feel quite honoured.”

Your movie, “The Inside” is about a group of young people spending the night in a derelict warehouse. They become trapped in the labyrinth of the building and each character is caught in a struggle with an evil entity with a thirst for flesh and souls, sounds twisted.

Eoin: “It definitely is twisted, and you know what, I haven’t seen anything that’s quite as demented as this film. My mum wouldn’t watch it. I invited my auntie to the screening because she likes this sort of thing, and after the film, they were quite adamant that there was something wrong with me.”

What was the inspiration behind The Inside and is there any message in there?

Eoin: “Yeah there is, it came from something I read in a newspaper a couple of years ago, people becoming workaholic and some un-escaping attacks on people. I wanted to make something lightly philosophical wrapped up in this demented film, in the terms of looking at the worst a man can do to another person and then looking at what a creature can do. The scariest bit of the film was actually replicating the violence onto people, and then when the creature arrives, it becomes a different type of film.

We only had like five days to make it so it wasn’t an awful lot of time to do. And in terms of making a movie where some crazy guys go mental, or a movie that’s just about a creature, I wanted to show a particular moment when the creature is meant to appear.”

You’ve got a Psychology master’s degree, has that helped you in making movies or understanding the psyche behind people?

Eoin: “I hope so. That was the idea with this being, because a lot of the violence is insinuated and the reason it works is that the acting is so strong. I had this idea of having nine or ten actors in a situation and seeing how each of the characters develops in these circumstances, and what kind of a situation it makes. So I think psychology kind of gives you a platform to look at what would affect people.”

What do you think will be the highlight of the festival for you?

Eoin: “I think American Mary; I met the twins at a festival and they have this crazy energy about them. They’re just a bit nuts, just the sort of people you would want at your Halloween party.”

The Monster Fest runs until the 9th of November and you can still buy tickets at http://www.cinemanova.com.au/catalogue/monster-fest/

Would you like another taster of horrors to come?

Excision is due to be released on DVD on 15th November and coming up soon an interview with two of the cast. 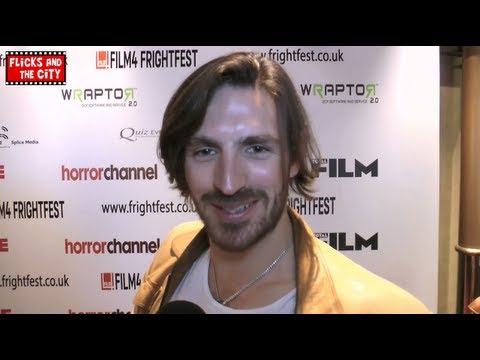