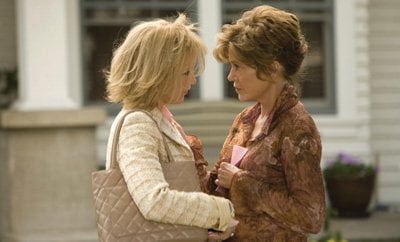 Baptized Lady Jane Seymour Fonda, the actress/activist dubbed Hanoi Jane during the Vietnam War was born on December 21, 1937 to legendary actor Henry Fonda and New York socialite Frances Brokaw. The Fonda side of the family is of Italian extraction, having made its way from Genoa to America in the1600s by way of The Netherlands.

Jane, a two-time Oscar-winner (for Coming Home and Klute) who’s been nominated for an Academy Award seven times, has been riding the wave of a career revival as of late, in the wake of the end of her marriage to brash billionaire Ted Turner. In 2005, she had a surprise hit on her hands with Monster-in-Law, her first film in fifteen years.

Now she’s back in another titular role, as Georgia, a family matriarch whose frustrated daughter (Felicity Huffman) returns to the family Idaho farm from San Francisco, her spoiled rotten offspring (Lindsay Lohan) in tow. 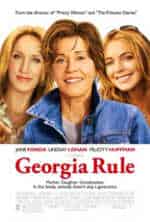 JF: When I heard that Garry Marshall was going to direct it, I really wanted to do it, because Garry’s known for comedy, and I knew from reading the script that there’s a lot of funny in here. It’s rare that you laugh out loud. In the hands of most other directors, it could have been too dark, but I knew that with Garry it would be one of these movies that you’re laughing and crying throughout.

KW: Where do we find your character as movie opens?

JF: Georgia’s been pretty happy for 13 years. She was in a marriage that wasn’t so good, and I think she’s a pretty happy, peaceful widow living here in this small town in Idaho… taking care of her garden, and puttering around… and taking care of the kids next door… and cooking. She loves to cook. And she has her rules. There are certain things you don’t do, like you don’t take the Lord’s name in vain. And you always give people a second chance. That’s why the title is Georgia Rule.

KW: What’s then occurs as the film unfolds?

JF: The two other generations of women intrude on her life, and the ghosts of the past kind of come back to be healed. And they are, for all three women in their own way, in ways that are very universal. There’s a lot of pathos and there’s a tremendous amount of humor in it.

KW: How does that plot thicken, so to speak?

JF: Rachel, my granddaughter, is played by Lindsay Lohan. Just imagine, if you will, this quiet, sleepy town in Idaho, a Mormon town where everybody knows everybody. The boys are all virgins until they get married. And they go away to do their mission work for the Mormon Church, and so forth. And suddenly, this creature from outer space appears which is really what Lindsay Lohan seems like. Nobody’s seen anything like her in this town, and it’s hard to know what to make of her, because she’s also smart, and funny, and provocative.

KW: What was it like working with Lindsay Lohan?

KW: How about your other co-star, Felicity Hoffman?

JF: Felicity comes from the theater. She’s not temperamental… She’s not a diva… There’s no ego… She’s just a really seasoned actress who knows her craft, and that’s a wonderful thing to work opposite.

KW: What should audiences expect from Georgia Rule?

JF: Movies about human beings the way they really are, that are beautifully executed, that are like life, where you can laugh and cry and learn, feel like you’ve been taken on a positive trip emotionally. And that’s what I think this movie will do.