NewsBlaze News
Home Entertainment Interviews Getting It Strait About Steve: The 10,000 BC Steve Strait Interview

10,000 BC star Steve Strait doesn’t mind letting it all hang out when talking about exposing most of his impressive gym body for the role of a stressed out prehistoric hunk for the movie, as long as you get it right and minus any misconceptions. The multi-talented actor, lead singer of the band Tribe, and former teen model also shared some ‘strait’ talk about how hard it is for a caveman out there in prehistoric times, feeling really dirty on the set, getting into shape for that fighting form look in a pretty scanty loin cloth, and minding your own business about his attraction to the opposite sex in movies. Steve also talked hair, the pros and cons when it comes to dinosaurs and females, and some amazing stuff about what he would and wouldn’t do for love, whether in a movie or real life. 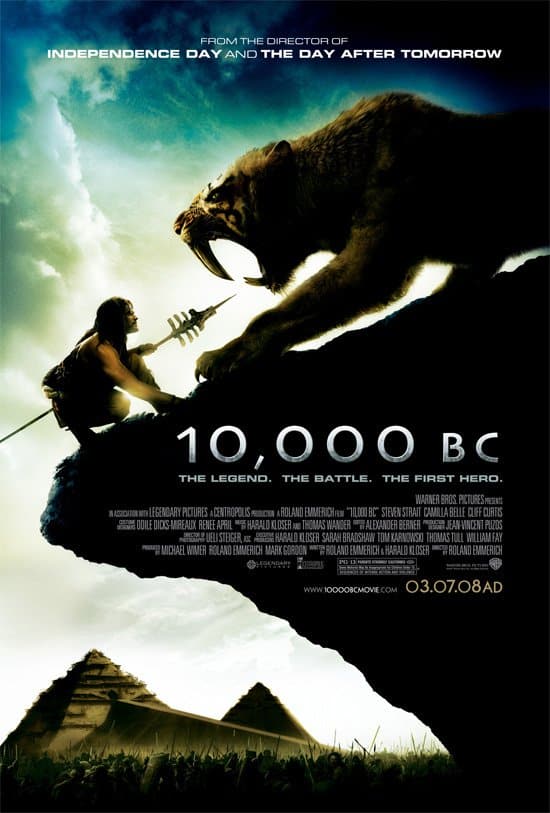 So you’re letting your hair grow out?

Speaking of hair, I’m guessing that those longs dreds of yours in the movie wasn’t your real hair.

SS: No, that wasn’t my real hair. Six months was enough!

Exactly how much of you was it, and did you let it grow out?

SS: You need to let a little grow our, so it attaches. Because when you’re running around, you don’t want…the wig to go flying! But it was about two-three hours of hair and makeup every morning. Yeah, the wig and four different layers of makeup and mud. And putting on the clothes took an hour or so. Pretty extensive.

Did you ever feel dirty?

SS: We were dirty! We were ruining towels across three countries by the end of the day. And you got in the bathtub and saw all the dirty coming out. I never knew how much I appreciated bathing!

What got excited about doing a prehistoric blockbuster?

SS: I am of the generation that grew up with Roland Emmerich’s films. I saw Stargate when I was nine years old. And I’ve been a huge fan since I was yay high. Essentially it’s a love story that also has all this action, and I just found that incredibly unique.

You’re not wearing much in this movie. Did that do a number on your inhibitions are gone, and is there anything left that would embarrass you at this point?

SS: No! You have to get over that initial phase like you’re in very little clothes, it’s freezing outside, and you’re poking and screaming and yelling. So you have to have a sense of humor about it initially, and just have fun with it. You have to take it in perspective. Hey, how many times in your life are you going to be on top of a mountain, yelling and doing a shot like this. You just have to enjoy it.

What kinda of training did you have to do before? Like knowing that you’re going to be in a loin cloth for the whole movie, did that make you, spend extra time at the gym?

SS: Ha! You haven’t lived until you’ve lived in a lion cloth! But it’s incredibly freeing. You know it’s interesting, because I grew up doing martial arts. My mom was a karate teacher when I was growing up. And I boxed too. So dropping and gaining weight was something I was pretty familiar with, to get into a weight class.

They had me on this dietary program that was limited enough that it would get the maximum amount off, but that wasn’t completely detrimental to my health. It was like eating rice and celery and just running, run, and run. Then I did the boot camp to bring everybody together.

Growing up in Greenwich Village and having your own band now, what were your musical influences?

SS: Obviously, Bob Dylan is the big folk hero. I listened to him quite a bit. Plus everything from the Stones to Beethoven, and Tupac. I like all of it, for different reasons.

SS: It was really cool. It was fantastic in the truest sense of the word. Although it’s a fantasy, the characters were very human. It relates this really awkward boy that no one likes, and the growth in him throughout the film was incredibly. And for me as a person going into this project it was a journey of and in itself.

You know, as much as the character in the film, there was a lot of mirroring going on. I was able to take what I was learning myself at the time, from beginning to end, and using it. Just using what I was feeling at the time. If anything, it was really nice to have something that was so organic.

How did you feel when it was all over? Did you just want to sleep?

SS: Yes, yes! I landed in Los Angeles and basically jumped in my car and drove up north for a month. And just chilled out, and tried to digest everything. I’d basically gone from Namibia finishing the last day of shooting, and got on a plane. Then I was waiting in line at Starbucks to get a cup of coffee, and I realized, yesterday I was on a dune in Namibia with a bunch of guys, and there was a pyramid. It’s a little shell shocking, people are looking at you like a crazy person. Yeah, I took considerable time off.

Were you disappointed that you didn’t have any big love scene with your leading lady, Camilla Belle?

SS: Are you talking about watching things?

SS: Is that just voyeurism? There’s no judgments. That’s okay.

Considering an alternative option, would you ever have loved to….

SS: I think one of the cool things we had to do in the film was that we kinda had establish that love at first sight really well in the beginning. Because we weren’t too much together in this film. And I think the journey of getting to each other is more powerful than any intimacy we could have had. I think the core of the film is, what would you do for love. So there are pieces of the film that everyone can relate to on a certain level. And I think it grabs them and pulls them through this ride.

Are you a romantic? And what would you do for love?

SS: I hope so! For example, I had just met my wife [actress, Lynn Collins] before I started making this movie. We had just moved in together for about two months. Then I had to go make the movie. It was like, okay honey, I’ll see you in seven months. And sahe and I were taking 26-hour flights each way, just to see each other for a weekend, from Namibia.

SS: You do what you can. For me, as a person, it’s everything good about everything human, and what drives it. In that regard people have asked me before, do you really believe this love story could possibly happen?” Yes, I do. I’m certainly a believer. I’ve experienced it myself and know it to be true.

Speaking of love, are you a dinosaur fan?

SS: Of course, who isn’t? Just the idea of these huge, mythic creatures roaming the earth at a different time and space. You go to the Natural Museum and see these huge creatures, it’s fantastic. Who isn’t interested in that?