Born Marc Alexander Knox in the Bronx on April 15, 1970, Flex Alexander got his start in showbiz as a dancer, earning his nickname because of his dizzying display of acrobat skills out on the floor. After being discovered by Spinderella, he toured with Salt-n-Pepa, Mary J. Blige and Queen Latifah before turning his attention to standup comedy.

Flex added acting to his repertoire, making his big screen debut in 1992 opposite Latifah and Tupac in the crime drama Juice, following that up with support roles in such full-length flicks as She’s All That, Snakes on a Plane and The Hills Have Eyes II. Meanwhile, he found steady work on television, starring in several short-lived series, “Homeboys in Outer Space,” “Total Security” and “Where I Live,” and playing Michael Jackson in “Man in the Mirror: The Michael Jackson Story.”

He also appeared on such sitcoms as “Sister, Sister,” “Moesha,” “The Parkers” and “Girlfriends” before finally getting a hit show of his own, “One-on-One,” which enjoyed a five-year run from 2001 to 2006. The versatile performer has four NAACP Image Award nominations on his resume, along with a couple of BET Comedy Award nominations. 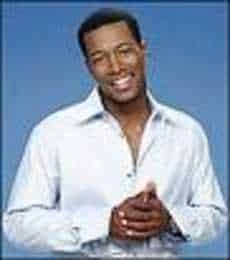 Flex Alexander: For one, my family. And secondly, I had done something like this before and taken it on the road a number of years ago, so, I knew that it could work. It was a no brainer.

KW: When you do standup, do you ordinarily work clean?

KW: What about the other comedians appearing on Soulaughable? Are they clean just for the show?

FA: No, the majority of them work clean constantly. We stress that, because we don’t want someone to be shocked if they later go to see one of our performers at a club. It just taints everything we’re trying to do. But on the other hand, we can’t absolutely control what people do outside of Soulaughable.

KW: Bill Cosby certainly built an incredible career around strictly clean routines. FA: There’s no reason why we can’t have that again. Things are cyclical, and I think it’s time for that sort of family fare again now.

KW: Which is your favorite medium: TV, film or standup?

FA: I don’t have any one favorite. There’s something about each of them that I love. The best way I can put it is that I love the consistency of television, the truth and the creativity of film, and the freedom of standup.

KW: I know you’re also a great dancer. Do you sing, too?

FA: No, you don’t want to hear me singing. Not even karaoke.

KW: When you played Michael Jackson in his bio-pic, did you do all your own dancing?

FA: Yeah, that was my background, so I was excited to do that. The dancing wasn’t hard. The challenging part of the role was in being believable and not a caricature.

KW: Well, you certainly succeeded, since you landed an NAACP Image award nomination for the performance. How did Michael feel about your portrayal of him?

FA: From what I heard from people close to him, he saw it and said I did a great job.

KW: How do you feel about his passing?

FA: I’m still devastated. I really am. He was the greatest entertainer ever, in my opinion, and he supplied the soundtrack to my life and to many of our lives. So, the world has suffered a great loss. I think his heart was truly too big for this world to comprehend and really treasure.

KW: I have never been able to master the moonwalk. What’s the secret to it?

FA: It’s rhythm, and you have to be patient with it. Some people will just get up on their toes and start going. You just have to stay solid, keep sliding backwards, and stay fluid.

KW: So, how do you get through those tough times?

FA: With prayer, and by staying close to my family, and by realizing that they’re what’s important.

FA: Wow! You know what? Sometimes you do get afraid of failing. Even as much as I have worked, you still sometimes question your confidence. You’re afraid of not being on top of your game, and you wonder what people are going to say. I’m not afraid of too much else.

FA: by just keep praying for me. That’s the best thing they can do. I don’t take that lightly, as I’ve really learned how to pray. Not that playing around pray, but that type of prayer, like where the old mothers put your name in a hat and burn it as an offering. That type of sacrifice can truly lift you up.

KW: Teri Emerson asks, when was the last time you had a good laugh?

FA: Yesterday, with my kids. [Chuckles] My son was breakdancing and my daughter was singing and running around. To watch them just cracked me up.

KW: How old are your children, Imani and Elijah, now?

FA: Someone who perseveres through all obstacles.

KW: And what would you say has been the biggest obstacle you have had to overcome?

FA: Surviving a household that was drug-filled, with drug addiction and the selling of dope… seeing friends die… having a gun put to my head… making it through all that and God still saw fit for me to be here.

FA: Sidney Poitier’s autobiography. But I read my Bible every day.

KW: What is your favorite meal to cook?

FA: I tend to shy away from that question, because I still have things to do. God willing, you’ll be able to ask me that question again at 80.

KW: “Realtor to the Stars” Jimmy Bayan was wondering, where in L.A. you live?

FA: I live out by Magic Mountain.

FA: Don’t let anybody tell you that you can’t do it, because I was told that all my life.

KW: Thanks again, Flex, and best of luck with Soulaughable and all your endeavors.