Corey Reynolds was born on July 3rd, 1974 in Richmond, Virginia where he was raised till he decided to head west to take a shot at showbiz. But his career took a detour and instead of sticking around Los Angeles, he ended up in a traveling production of Smoky Joe’s Cafe.

Eventually, he settled in New York where he was cast in the role of Seaweed in the original Broadway production of Hairspray. After landing a Tony nomination for that dynamic performance, he returned to Hollywood, appearing in The Terminal, directed by Steven Spielberg, and on several TV series, including Eve, The Guardian, Without a Trace, and CSI: Miami, before being invited to become a regular member of the ensemble on The Closer, the TNT dramatic police series co-starring Kyra Sedgwick, J.K Simmons and Gina Rivera.

Here, he talks about his career, and about playing Sergeant David Gabriel on the show, which recently started its third season. 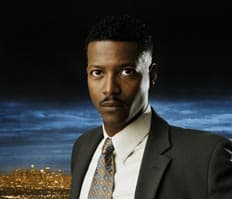 KW: Had you hoped to be able to play Seaweed in the new screen version of Hairspray, given that you had originated the role on Broadway and landed a Tony nomination for it?

CR: I had some availability issues because of my prior commitments to the show, but to be honest, it never was something that I was really gunning for, because I really feel that you can’t just go back and recreate something. Hairspray was really special, such a big smash, and we were all so very young, just kids, and then this whirlwind happened. So, I thought I’d just keep my magic in a bottle. Still, I was a little disappointed to see that there’s no one from the Broadway show involved onscreen. I actually sang a song for the soundtrack.

KW: That must feel weird to see someone else in your role.

CR: It’s like seeing someone else dating your ex-girlfriend. But the truth of the matter is that I’ve worked very hard since leaving the show in 2003 to move into the realm of leading man and young adult, versus kid. So, I think that that type of project may not have been the type of springboard that I was looking for to use to continue my ascension in Hollywood. I’ve moved on, and I’m looking in a new direction career-wise, but I’m very grateful that something I was a part of creating continues to feed people and to provide them an outlet to do what they love. I think that’s just great.

KW: How did it feel to get a Tony Award nomination for Hairspray?

CR: That was pretty exciting. It was my first Broadway show, so to have that happen out of the gate, I was pleasantly surprised.

KW: That sort of stamped you as an accomplished actor right of the bat.

CR: Yeah, but I’ve got to get that trophy, though. I want to take that walk.

KW: Well, The Closer is getting a lot of critical acclaim, so maybe an Emmy’s on the horizon for you.

CR: Who knows? If I play my cards right, and continue to do what I consider good work, and let the chips fall where they may.

CR: I love it, hands down. I loved my character in Hairspray, but when it comes to theater, you’re a little bit more restricted in what you can do, because you have the same show over and over again. But with this, being able to develop this character, and let him grow, and to allow myself to grow as an actor at the same time, really is wonderful. I couldn’t have asked for a better role on a television show. You don’t see many minority men my age playing college-educated, well-spoken, articulate, good guys. So, that was something that was really important to me as an actor, to try to find something that would present me in a light that I want to be seen in. And this show presented that opportunity.

KW: Yeah, and even when you do see that positive role model-type character, they often inject a lot of humor which undercuts…

CR: …their own legitimacy as what ever professional they are.

CR: I agree with you 100%. I see that in some other television series, a couple of medical shows. On one, there’s a doctor who went to college and med school, twelve years of intensive education after high school, and he’s still saying, “Whazzup?” You would think that at some point that educational experience would bleed into how they present themselves. What that does, in my opinion, is it kind of discredits the whole idea of being the professional. But for me, in playing Gabriel, it’s win-win across the board as far as how I like to act, and the type of person I want to portray.

KW: On The Closer, you’re surrounded by a talented cast, such as J.K. Simmons, who got the biggest laughs, stealing all his scenes in Spider-Man 3 as J. Jonah Jameson.

CR: Absolutely! He loves those Spidey checks. He was telling me that in the new Spiderman DVD…

CR: Yeah, in 2.1 there’s a deleted scene of him in the Spider-Man costume in his office running around. And he said, “You know the worst part about it was they gave me Tobey’s suit, and it didn’t exactly fit me.” [Chuckles] Yeah, we have a great group with him, G.W. [Bailey], Kyra, Jon [Tenney], Tony [Denison]… And for me, it’s important to be able to have this be the foundation of my television career.

KW: How is the daily grind of shooting a series?

CR: We shoot an episode every seven days, so we go Monday through Friday, and then Monday and Tuesday of the next week. If you’re in every scene, you’re probably looking at about a 65-70 hour week. But when you’re doing what you love, it may get tiring, but it never gets bad.

KW: Kyra’s from New York in real life, but has a Southern accent on the show, while you’re from the Virginia, but don’t have the accent. Did you deliberately try to lose yours?

CR: I wouldn’t say I’ve worked to lose it, but I’ve always been told by others that I’m well spoken, and that they’re surprised I’m from Virginia. But if you hear me on the phone with my family, you’ll get a totally different sound, I can assure you.

KW: Former L.A. District Attorney, Gil Garcetti, who prosecuted the O.J. Simpson case, is a consultant on the show. What’s he like?

CR: I gotta tell you, man, Gil is surprisingly one of the coolest people I know. You’d think that somebody in his position, and who had done what he’s done for a living, would be very uptight. Not at all… not at all.

KW: Jimmy Bayan told me to ask you where in L.A. you live.

CR: I live in Los Feliz. I just bought a house there, so I’m excited.

KW: Who would you like to see yourself acting opposite in a feature film?

CR: Ooh, that’s a really good question. There are lots of people I’d love an opportunity to work with. One of them was Tom Hanks, and I got to work with him on The Terminal. That experience really blew my mind to be honest. That was my first movie ever, and I’m on the set with Spielberg and Tom Hanks.

KW: How was it working with them?

CR: They are truly masters, and to be honest, they are two of the nicest people you could ever meet in your life. And for me, that was great to see people I admire, and to see how they treat other people. That helped me to understand that if you truly want to experience success on the scale that these guys are experiencing, there is a positive aura that must surround you. You must be a positive person to have staying power. Lots of people can get there, but longevity is what it’s all about.

KW: Did you observe anything about how they each approach their craft from being around them on the set every day?

CR: Stay realistic, know exactly what it is that you’re going for, and then stay determined, because determination is the deciding factor between success and failure.

KW: Corey, thanks for the interview, and I hope I can get another one with you after you break real big.

CR: You got one whenever you want, all right?