Born in New Jersey on September 26, 1981, but raised in Waldorf, Maryland, Christina Milian is a versatile talent whose resume includes film, television, theater and music. She recently appeared in the television movie “The Christmas Cupid” and on “CSI” and enjoyed a recurring role as the voice of Esther on “Family Guy.”

She also starred in the last installment of the popular “Bring It On” franchise, entitled “Bring It On: Fight to the Finish.” Prior to that, Milian’s feature-film credits include “Pulse,” “Be Cool,” “Man of the House,” “Love Don’t Cost a Thing,” “Can’t Buy Me Love” and “Torque.”

Christina kickstarted her showbiz career at a young age, when she became a junior journalist on the Disney Channel’s “Movie Surfers.” Before igniting her musical journey, she appeared on such TV shows as “Clueless,” “Sister, Sister,” “Smart Guy,” “Charmed,” “The Steve Harvey Show” and as a recurring character on “Get Real.”

Christina’s “It’s About Time,” released on Island/Def Jam Recordings, featured the mega-hit “Dip It Low” which combined a unique blend of urban, Latin and pop sound. Her self- titled debut, “Christina Milian,” produced the hit “AM to PM.”

She moved to California at the young age of 13 and was selected to sing the hook on Ja Rule’s No. 1 hit single, “Between Me and You.” The enormous success of the song introduced her to the mainstream music world and gave her commercial success.

Christina subsequently co-wrote the Jennifer Lopez hit “Play” and she was one of the co-writers of Justin Bieber’s smash “Baby.” Here, she talks about serving as the Social Media Correspondent on NBC’s The Voice, where she brought viewers closer to the competition as bridge between the on-air and online experiences. That enabled the show’s fans to appreciate the entire production process through exclusive interviews, video, photos, news about the coaches and artists and a live twitter feed on the official website the-voice/.

KW: What interested you in being the Social Media Correspondent on NBC’s The Voice?

CM: Well, I thought it was an interesting concept when they approached me with the idea, because I’ve always been heavily engaged with my fans on the internet from day one. That connection’s one of the reasons why I’ve been able to enjoy such longevity in my career. I guess NBC must have noticed that one of my main staples is social media. So, when they approached me for The Voice, I thought “Why not be the first one to do it?”

KW:When do you work in that capacity? Just during the hours when the show is on the air?

CM: No, all the time. I tweet day and night about the show, and the entire time while it’s airing. So, the fans are completely engaged while it’s on. But I constantly get messages asking questions about the stars of The Voice. I also posted a ton of interviews I’ve done with all the artists, the coaches and the advisers on the show. So, I do my job 24/7.

KW: What do you think of the show’s blind audition format?

CM: I love it! That’s what make our show unique and gives it so much more integrity. After all, the show is called The Voice. It’s about vocals, and you have to stand out to get the attention of these four, Grammy-winning superstars who have an amazing ear and know what they’re talking about. They rely on their ear as well as the reaction of fans in the audience to figure out whether that contestant is worth pressing that red button for. It’s a great concept which keeps everybody on the edge of their seat. It’s also kind of scary because sometimes they don’t press the button for people who do have the talent and do have the look. You just never know what’s going to happen.*

KW: Do you ever disagree with the judges?

CM: Oh, there have been moments. But remember, I’m watching the actual person. I can’t say what I would do if I were turned around and couldn’t see them.

KW: How hard is it to get on the show? How many people applied?

CM: We have thousands and thousands. Over 30,000 people auditioned all around the country to get down to the final 100+ who made the cut.

KW: I’m an entertainer, period. But I’d probably have to say my passion is in singing. I’m willing to go broke singing. [LOL]

KW: What’s coming up for you, musically?

CM: Big things are about to happen. I’ve recently signed a new record deal and I’m already in the studio working on my next album.

KW: Larry Greenberg says: I’m trying to promote an independent film I made on social media, mainly Facebook. It can be overwhelming. Do you have any tips about the best way to reach fans online?

CM: Definitely pay attention to things like hashtags and to what’s trending at the moment. Try to connect to what’s hot and to reach out to and to follow the right people. You never know who might retweet you and help you get some more followers.

CM: Are you a different person in front of the camera than the person you are behind closed doors? I used to be, but no longer. I find I don’t need to be polished. I feel that you have to keep it real, and that’s the best way to go.

CM: I have had fear in the past, yes. I’ve learned to fight it. But I still have my moments. I just have to remind myself that fear is all within your mind, and that you’re only holding yourself back when you give in to it. Even fear of success can be scary. Just get over it!

CM: Oh my gosh! This morning, after I woke up from a dream in which I was crying. [Giggles] I was crying really hard, and I had a good laugh telling my friends why I had this long, drawn-out crying dream. It was really funny because I hadn’t had a dream like that in a long time.

CM: There are so many. I make a great lasagna. I also like making piccadillo. It’s a Cuban dish with ground beef, tomato sauce, garlic and olives served over rice, with plantains. My ex-husband and all my boyfriends love it.*

CM: Penny Lane. It’s part of Children Uniting Nations, which mentors children in foster care, so that they can have a good life after they leave the foster care system.

CM: Work! Opportunities! And the chance to help my family.

CM: My best was to become a songwriter. I can’t say that I have a worst, because I don’t have any regrets.

CM: Oh man! Can we just keep it real? To win the jackpot in the lottery. [LOL]

CM: My mom was a cheerleader and had me as a teenager. I remember her giving me some pom-poms and teaching me how to do some splits when I was 3 or 4.

KW: The Mike Pittman question: Who was your best friend as a child?

CM: Myself, my mom, and then, when I was about 7, I became close friends with a girl named Christie Collins, even though our families were so different. We lived across from each other*

CM: The will to never give up and to be fearless. That’s what I have. You have to be outspoken.

CM: As a happy, humble person, and as someone who motivated others to never give up.

KW: Thanks again for the time, Christina, and I hope to talk to you again when the new album is released.

CM: That would be great, Kam. Thanks!

Christina Milian talking about The Voice: 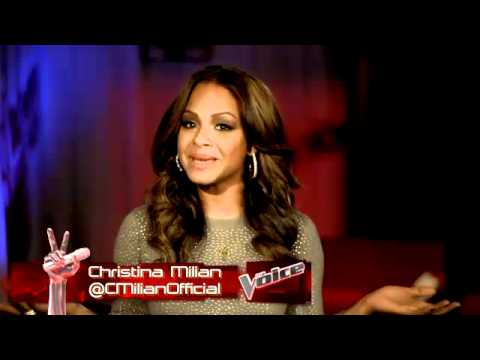