Channing Matthew Tatum was born in Cullman, Alabama on April 26, 1980. A mix of Irish, French, German and Native-American ancestry, he was raised mostly in Mississippi and then Florida before starting out in showbiz as a fashion model and as a dancer in music videos.

He recently co-starred opposite Jonah Hill in the hit comedy “21 Jump Street.” The two also served as executive producers on the project, which has grossed $200 million at the box-office worldwide, with a sequel currently in development. 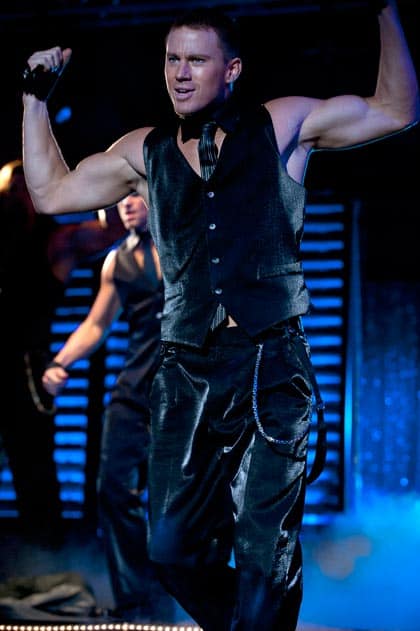 Earlier this year, Channing co-starred opposite Rachel McAdams in “The Vow,” a romantic drama that grossed $200 million, too. Additionally, he starred in Steven Soderbergh’s spy thriller “Haywire,” and will soon be seen in “Ten Year,” a film he produced in collaboration with Reid Carolin and Iron Horse Entertainment. The film’s ensemble cast includes Channing’s wife, Jenna Dewan, along with Rosario Dawson, Lynn Collins, Kate Mara, Anna Faris, Brian Geraghty, Justin Long and Chris Pratt, and will be released on September 21st.

Tatum is currently in production on the Steven Soderbergh crime drama “Bitter Pill” with Rooney Mara, Jude Law and Catherine Zeta-Jones which is set to hit theaters next February. Also set for 2013 is “G.I Joe 2: Retaliation,” where he stars alongside Bruce Willis and Dwayne Johnson.

His prior film credits include “The Son of No One,” “The Eagle,” “Dear John,” “G.I. Joe,” “Fighting” and “Stop/Loss.” In 2006, he received an Independent Spirit Award nomination and a Gotham Award nomination for his spellbinding performance in the powerful, coming-of-age drama, “A Guide to Recognizing Your Saints.”

That same year, the versatile thespian starred opposite Amanda Bynes in the romantic comedy “She’s the Man,” as well as in the surprise hit “Step Up.” Here, Channing, who lives in Los Angeles with his wife, Jenna, talks about producing and playing the title role in the semi-autobiographical “Magic Mike.”

Channing Tatum: What’s up, Kam? How are you doing, brother? 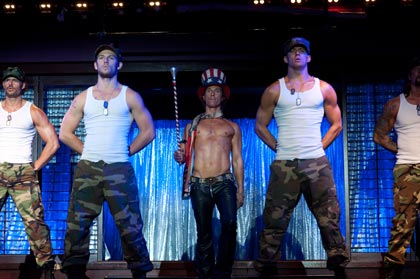 KW: I’m great, thanks. Let me say right off the bat, Channing, that I really was pleasantly surprised by Magic Mike. I wasn’t expecting such an emotionally-involving, character-driven film. I thought it was just going to be one of those superficial dance flicks.

CT: That’s cool, man. Thank you very much. I know that they’re selling the Showgirls aspect of it, but it’s not just about men stripping. There’s a little bit of a story there, too.

KW: I have a lot of questions sent in by fans who knew I’d be interviewing you. Legist/editor Patricia Turnier asks: What interested you in making a movie about male strippers?

CT: I had a little experience in this world and, to be honest, I had never seen it on film. So, when [director] Steven Soderbergh and I started talking about it, we discussed some classics like Boogie Nights, Shampoo and Saturday Night Fever, and decided we ought to be able to make a memorable movie about a subject that’s never been covered cinematically before.

KW: Harriet Pakula Teweles says she read in Wikipedia that you spent some time as a stripper. She’s wondering whether that just might have been a joke that somebody posted there.

CT: No, I did do it for about eight months of my life, which is a relatively short period of time. It’s not like I made a career out of it or anything. This movie is really a bit of an explanation of my brief experience in that world. I represented a new generation of strippers where it was no longer about the long hair and all that, but about hip-hop and kinda doing your own thing. When I went in at 18, all the other guys were in their mid to late 30s. I was like a lost child, and that was what attracted Soderbergh to it. He said that he’d love to see a story about a naive kid who gets lost in this world among these men who have been stripping for awhile, and who know the ropes and how to handle themselves. And then the novice gets to teach one of the veterans a lesson, and make him reflect about what he’s been doing with his life.

KW: Larry Greenberg says: Having been close to a number of people who work in exotic entertainment, I am always struck by the difference between the reality of the job and the portrayal of strippers in films. He asks: How realistic is Magic Mike?**

CT: I tried to make it about as realistic as we could. You have to take into account that we weren’t going to go crazy and make the movie X-rated. And we didn’t want it to be as dark as say, Requiem for a Dream which I love, but found a little painful to watch. I wanted to make more of a fun film with a slice-of-life feel. But I also wanted to show, by the end of the movie, precisely why you have to pay a price for all that hedonistic behavior.

KW: The grittiness of this movie and all the scenes at the shore reminded me of Quentin Tarantino’s Jackie Brown. Have you seen that film?

CT: No, I haven’t. But I’m going to have to go and look it up now, because I’m pretty sure someone else said the same thing to me. So, I feel like you’re probably right.

KW: Emma Newell says: Your performance in 21 Jump Street was visionary. Would you work with Seth Rogen again? It looked you really enjoyed working together.

KW: Sorry, I think a lot of people confuse the two of them, since they look a lot alike and both had breakout roles in Superbad.

CT: No, it’s fine. Seth and Evan (Goldberg) are writing and directing partners, and they actually did a pass on this script for jokes and stuff towards the end. But they did work on it.

KW: 2012 certainly seems like your year, Channing. You already have had three hits with 21 Jump Street, The Vow, and Haywire. You’ve been competing with yourself at the box office half the time.

CT: [Chuckles] I really didn’t plan for all these movies to be released one after another like this. Haywire was supposed to come out last year, but was delayed while the studio tried to decide when it would be optimal for it to hit theaters. The Vow was held for Valentine’s Day, which I thought was kind of smart. So, those three sort of stacked up. And Magic Mike was already slated for a late June release.

KW: Patricia says: I am always fascinated by people who overcome hurdles and manage to become successful. You had to struggle with dyslexia. What message of hope do you have for young people who are dyslexic and are surrounded by naysayers who do not believe in their dreams?

CT: That’s a really good question, Patricia, because I kinda attribute a lot of my success to it. I don’t want to sound snobbish by calling myself “an artist,” but I do love the arts. Besides acting and dancing, I sculpt and paint, and I love taking photographs. I’m convinced that people like me look at life in a different way and see the world differently. Unfortunately, I felt stupid for much of life, because I would always be the last person getting up from taking a test in school. You take a dozen years of that, and it kinda becomes ingrained in you that you’re the dumb kid that can’t read. Eventually, I realized that that doesn’t really mean you’re stupid. All that means is that it’s one aspect of life that just works differently for you. Schools are kind of archaic with their standardized tests designed for one standard person. I can promise you that you’re not less than anyone else just because you’re dyslexic. I even hate when they call it a disability. I don’t say I have a disability anymore. I just say that I see things differently.

CT: Hmmm… That’s a good one. How about: If you could do one thing to change the world for the better, what would that be?

KW: Okay, how would you like to change the world for the better?

CT: I think I’d improve the educational system. It’s so archaic, and hasn’t really evolved for years, especially with computers now being so interactive. I think there has to be a better way to learn. I think educators want to overhaul the system, but there’s just no money right now. So, I think that’s why so much potential is being squandered.

CT: Yeah, I’m afraid every day. Generally, you just don’t know what’s coming around the bend. It’s all a question of how you deal with the fear. Are you going to run from it or are you going to take it on?

CT: I’d have to say eggs and grits.

CT: I see someone working really hard for the future.

KW: Thanks again for the time, Channing, and best of luck with Magic Mike. And I hope to speak to you again down the line.

CT: Absolutely, Kam! Anytime, my man. You were great!