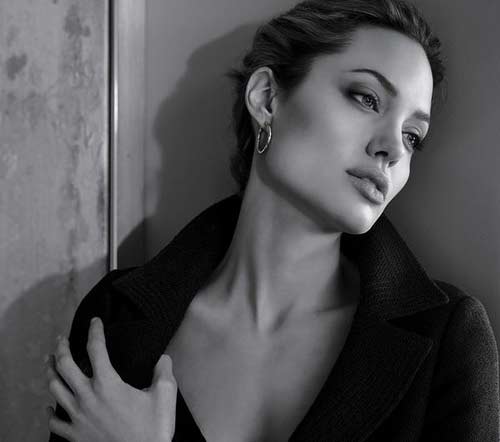 Beowulf may have put her half to sleep when reading it as a kid, but getting to play an evil temptress known only as Grendel’s Mother in the lavish Bob Zemeckis 3-D Beowulf, certainly got Angelina Jolie’s energy level revved up. Angelina looks like she’s relishing every moment of it too, doing a seductive witch strutting around nude except for stiletto heels and a long, slithering tail between her legs. And playing a mom to assorted mythic monsters, including Crispin Glover’s misbehaving Grendel, was no sweat either for this somewhat mythic being in her own right. Though Angelina did have to call home to Brad, according to a confession dropped during this interview, to get over a shy spell while baring it all for the movie, even if her curves were digitalized.

Now you were really a mother in this movie, in more ways than one. Weren’t you pregnant at the time?

ANGELINA JOLIE: I was. This was a two and a half day shoot for me, and I was three months pregnant.

How did you manage that?

AJ: Well, we did the mapping of my body before. But no, it was a pleasure. And the fact that it was short was that much easier, to not have to work too much. But you just try to balance, and try not to work too much. And Brad and I, we take turns working. So it’s not that hard.

What was it like to play Grendel’s demon mom in Beowulf?

AJ: It was great, it was a great experience that we all had. I think that the nice thing about it, was that we all do films these days. So much of it has become a business. And so much of it is these projects where people want to rush through these things. Or you feel like you make a movie, and you’re not really sure.

So you’ve kind of lost touch with the artistic process, and the fun of it. But Bob is a real artist, he loves it so much, and he’s so enthusiastic, so original. And you really feel that you remember you’re a creative person. You have fun with everybody else.

I needed that, as an artist. So it was really great. And I’m really grateful for the experience.

This movie is about all about myths, and you’re pretty much a myth yourself in the public eye. Did you feel any connection?

AJ: I try not to think about my public life. I focus on my private life, and that’s just the best way to live. But, as for this character, I was excited I got a call that I was going to be working with Bob Zemeckis. I was pretty much saying yes to anything. Then, I was told I was going to be a lizard!

I was brought into a room with Bob, with a bunch of pictures and examples. He showed me this picture of a woman half-painted gold, and then a lizard. I have kids, and I thought, that’s great. It’s so bizarre! I’m going to be this crazy reptilian person, or creature.

So I was very excited. I met with Crispin, and we had a great time, and did just amazing scenes. Then I saw the poster and I realized, oh, I’m not just a lizard.

Hey, she’s one of those fun characters. She’s evil, she’s temptation. And she’s very fun to play. Again, we had a great time, and I got to work with great actors.

Isn’t she pretty much one of the first femme fatales in history?

AJ: I suppose! Yeah, I suppose she is…

Did you ever read Beowulf?

AJ: I had read it years and years ago. I hardly remembered it. I think I read it half asleep as well! But ditto, it’s one of those great stories that you know the themes of it. The themes you take away and you never forget.

Is Grendel mother a feminist?

AJ: She was quite powerful. And capable, even though she was stuck in a cave! Quite a different character, but certainly not a woman of the period.

Has Beowulf hooked you on doing more animation?

AJ: I would certainly love to do more. I wouldn’t call this animation though, because we were physically doing all of these things. Every single gesture is ours. Everything is acted out, with performance capture.

Even the way our eyeballs move. Because it’s such a new thing, it’s exactly where we look. They were mapped, exactly. It is our performances, and we had these scenes and acted together. I do think that is important to state, because it’s exciting, and different.

How did you like your new look in performance capture? Especially when you were practically naked, except for the gold paint in those, well, strategic places.

AJ: I got a little…shy! I really wasn’t expecting it to be so real. You know, I didn’t expect ourselves to come out as much. Because of, especially the type of character I play, it was kind of funny at first. So yeah, there were certain moments where I felt actually shy, and called home!

AJ: To explain the fun movie I had done, that was this digital animation, and it was in fact a little different than they were expecting. But I was really surprised that I felt that exposed.

Did you like the way they digitally enhanced your body?

AJ: I loved my tail!

What kind of stories did you get into when you were a kid?

And when it comes to film, I loved Lawrence of Arabia. And I loved reading Winston Churchill’s works, I loved his stories of his early life and his adventures. You know, I loved the history in that. So those are my favorites.

Now, you had to live in a cave, and fly and swim in a green-suit in front of green-screens for the motion capture. Which was most tough for you?

AJ: Bob will make you do weird things! I think for swimming we had to think of something I could be attached to, and my waist was attached. And I had a harness, and had something with wheels. It was day one, and I had to suddenly swim!

We were trying to think of what that would be, in this new way. So I was swimming with my upper body, being rolled around Crispin, and trying to pretend I was swimming. And with the flying, we hooked me up with wires and flew around. You know, I had something where I was hooked up, and being moved.

So what was that language you and Crispin were speaking in Beowulf?

AJ: It’s Old English. It was fun to learn, and it was beautiful. But I think it went over a lot of people’s heads!