As you know everyone is trying to add bacon to their burgers including Wendy’s who has been offering the Baconator. I went out and had to try it just because. Well, I have to say it sucked! They used cheap bacon! They need to stick to what they do best and that is make burgers.

I do give them some credit for making an attempt at making a burger, I think that is mostly because I like the commercial where the guy replies to his date and says he is a “meatatarian” – you know he only eats meat.

Here is the bottom line, when it comes to making a great burger; the bacon is the star not the burger! That is why starting with the best gourmet bacon like the kind found at www.baconfreak.com is very important. My goal here today is to try and tell each of you what a true, 100% real “Bacon Burger actually is. 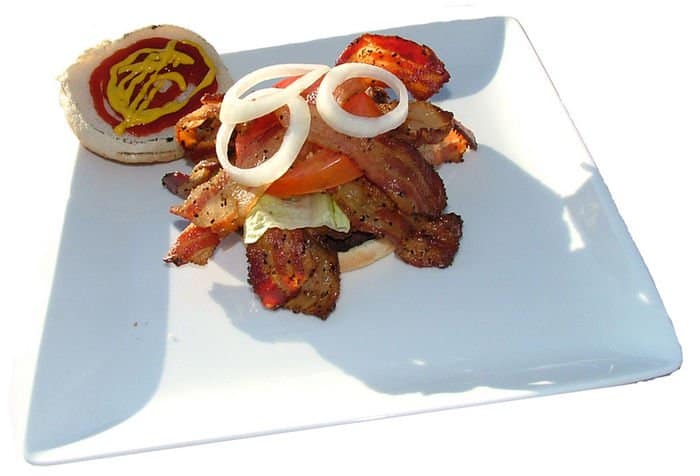 So in the interests of Bacon Freaks everywhere, “Boss Hog” will offer up what a great burger is all about. First of all, we can’t help but notice that all of these fast food places get unfairly skimpy and cheap with the amount of bacon you get on your bacon burger. After all, it “IS” a BACON Burger right. So, where’s all the bacon? Add several pieces of horrible bacon like Wendy’s did doesn’t make it better, it just gives you a mouth full of bad bacon.

Obviously you need to start with the basics for a great “Bacon Burger” bread, lettuce, onions, cheese, right? Ok are you ready? Here is my secret to making a real 100% real Bacon Burger! Start by taking out your trusty meat grinder and grind a pound of uncooked, gourmet bacon. Then grind it again. That’s right, for the properly “fine” consistency, you’re going to want to send it through a second time.

Take that pound of ground bacon and now lovingly hand pat it and mold it with a little bit of Tabasco and Worcestershire sauce into four nice big quarter pound patties.

Place the patties on a skillet, preferably cast iron, to more evenly distribute the heat in a universal consistency, and shake some onion and garlic powder onto the burgers as they cook over a medium flame.

Cook them all the way through, but don’t burn them or make them brittle and crackly crunchy!

Meanwhile, as the burgers cook, toss eight pieces of bread on a plate and do them right with lettuce, onions, mayo, mustard and ketchup.

Let some sliced cheddar cheese start melting on the burger during its final flip on the grill and go have yourself a TRUE Bacon Burger Bonanza!

Oh and for effect, top with several strips of bacon! …. MMMM Bacon!!!