Thinking back on it all today, I suppose we all subconsciously knew that once our Boss Hog “Hickory Smoked – Brown Sugar Cured,” Country Style Bacon became so widely and wildly popular, it was just a matter of time.

People started contacting us asking if we were truly sincere about or proudly proclaimed assertion and affirmation that in an absolutely perfect world, “Everything should taste like bacon!” of course we were, but what could we do if some people weren’t eating gourmet bacon? Was it really our job to play bacon cop for the rest of the world? 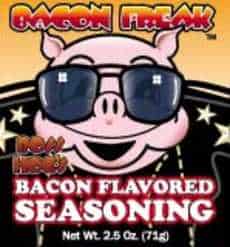 However, our concern for others did not subside, but rather dramatically increased. It got to the point where there were too many sleepless nights worrying about the fact that there are still so many meals being served out there in the world that don’t taste anything at all like our Hickory Smoked, Brown Sugar Cured, Country Style Bacon that’s found over at Bacon Freak Site.

We knew we couldn’t just sit back and enjoy like knowing that our fellow human beings were eating food that tasted nothing at all like bacon. It just wasn’t fair, it just wasn’t right. So we enlisted the help of esteemed Professor Porker Pigginton of BFU (Bacon Freak University) and he jumped into action to come up with the perfect solution to this world crisis. 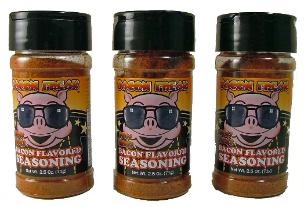 Here it is Ladies and Gentlemen, Bacon Freak’s very own “Bacon Flavored Seasoning” has arrived to save the day. It’s specifically designed to help everything from soups and salads, to eggs and sandwiches, taste as delectably delicious as our Boss Hog “Hickory Smoked – Brown Sugar Cured,” Country Style Bacon.

Many people are actually using it to help improve the flavor of their “less than gourmet” cuts of meat, from steak to pork chops and from lobster to chicken. We were even quite surprised to discover that you can actually use it to make “store bought” quality bacon taste nearly as good as real bacon!

It’s 100% completely vegetarian, with no meat products added, so all you vegetarians out there or those of you who for whatever reason, including religious reasons, don’t ever eat any pork. Now you can enjoy the most delicious flavor in the entire universe, without the guilt of breaking your oath to abstain from bacon.

I find that I even like to shake it onto freshly cut vegetables to give it that extra oomph of bold “baconosity!” For snacks, you can melt some cheese on some bread and season it with this Bacon Flavored Seasoning and instantly create something that you would pay $6.50 or more at a restaurant. It honestly goes on pretty much anything and you can get it for a price that is so ridiculously low right now, I’m already worried we might run out of the stuff before Professor Piggington gets the next batch prepared.

Get it while you can at http://baconfreak.com