If your teenager is addicted to Facebook, that it is causing his or her grades to slip, what extreme measures would you use to get them to stop?

Well for Paul Baier, a research consultant in Boston, it was bribing her with money. Baier is paying his 14-year-old daughter $200 to quit the social network until summer, according to a post on his blog.

In the agreement, Baier’s daughter promises to deactivate her Facebook account until June 26. In return, Baier will pay her $50 in April and the remaining $150 in June, at the end of the five months.

Is this effective parenting? 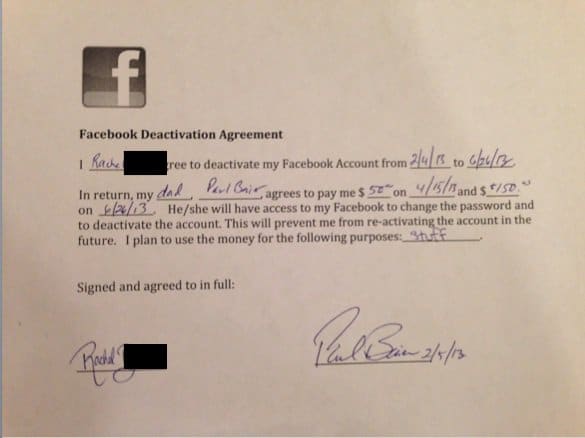 Paul claims this was his daughter’s idea. Well of course it was $200 to stay off of Facebook for a few months, what a great deal! The question is, does this type of parenting send across the right message? Instead of forcing rules for his daughter, he is bribing her. Perhaps he could have approached this differently by grounding his daughter from Facebook until her grades came up, and if she brought her grades up, her reward would be $200. If I were Paul’s kid, I would find any rule I could to break to make some extra cash!

Please comment below and let us know what you think about this method of parenting.