On Friday, June 10, 2016, NRA lawyer Chuck Michel said that he is going to file a challenge to California’s Open Carry bans during an interview on the NRA program “Cam & Co.”

The same NRA lawyer testified before a California legislative committee years ago that if California banned the Open Carry of unloaded handguns then he would file a lawsuit challenging that ban. 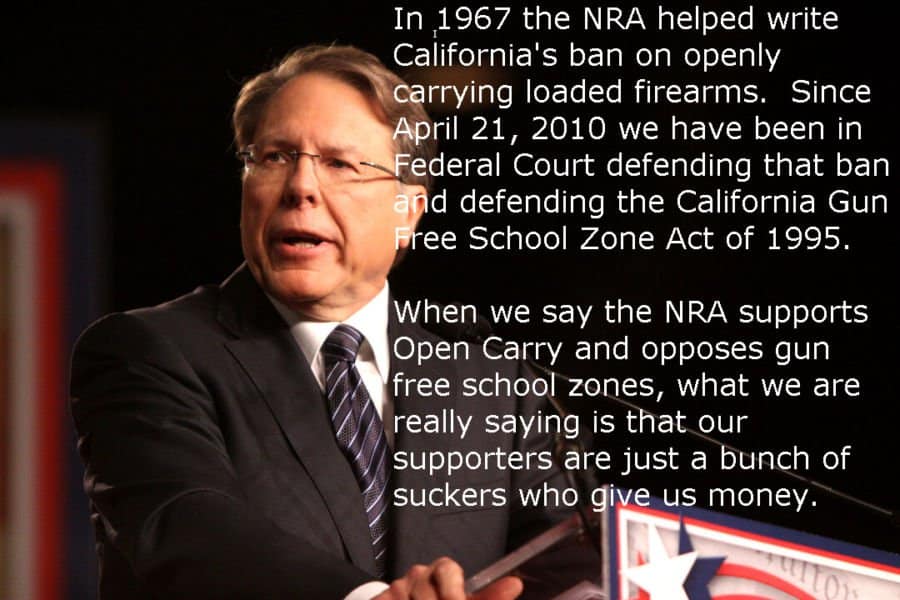 It should be obvious to even a blind man by now that the NRA is the largest, most powerful proponent of gun-control in the Nation. The Second Amendment Foundation is the second largest supporter of gun-control and, in California, the NRA’s state organization (the California Rifle and Pistol Association) and the CalGuns.nuts Foundation are the two largest supporters here. But that is a topic for another article.

The NRA is also the biggest liar when it comes to supporting the Second Amendment.

In 2014, the NRA issued an alert stating that people who openly carry firearms are “weirdos.” The backlash against the NRA by its membership was overwhelming. The NRA quickly published a video retraction in which it claimed to support Open Carry. A short segment of that video retraction can be viewed here.

If one were to assume that this time the NRA is telling the truth and it files a lawsuit challenging California’s Open Carry bans (a big “if”), it is too late.

For that matter, I challenged the constitutionality of any permit requirement just in case the California legislature enacted a statewide Open Carry licensing law before my lawsuit was decided. It didn’t and the prospect of such a law being enacted before my appeal is decided is somewhere between nil and none.

My lawsuit has been on appeal since May 27, 2014. It has been stayed pending a decision in the Peruta v. San Diego en banc concealed carry lawsuit filed by the NRA and the concealed carry lawsuit, which was heard before the same en banc panel of Federal circuit court judges (Richard v. Prieto) which was filed by the Second Amendment Foundation in conjunction with The CalGuns.nuts Foundation.

Their lawsuit was substantially identical to the Peruta v. San Diego concealed carry lawsuit and it lost as well.

There is absolutely no way for the NRA Open Carry lawsuit, assuming it is even filed, to get ahead of mine. My appeal was filed first. My appeal will be heard and taken under submission for a decision before the NRA’s hypothetical lawsuit. It will be my California Open Carry lawsuit, not the NRA’s, which vindicates the Second Amendment Open Carry right in the 9th Circuit Court of Appeals.

And, in the unlikely event that I should lose before the 9th Circuit Court of Appeals, then it is my California Open Carry lawsuit which will be in front of the NRA’s should a cert petition with the US Supreme Court need to be filed.

Keep that in mind when the NRA and its California state organization, the California Rifle and Pistol Association, asks you for money in support of its California Open Carry lawsuit.

And should the NRA ever file a California Open Carry lawsuit, read it first. When the NRA challenged the magazine and ammunition ban it told the court that it is constitutional to ban magazines, it was the ten round limit the NRA objected to.

The California Court of appeals published a decision which said that if magazines can be banned, as the NRA claimed, then it is constitutional to ban magazines which hold more than ten rounds.

There are any number of ways an NRA lawsuit challenging California’s Open Carry lawsuit can fail. And given the NRA’s opposition to Open Carry and support of Gun-Free School Zones in the courts, one can be forgiven for expecting that the NRA would file a lawsuit it designed to fail.

Memo to the NRA, and the Second Amendment Foundation and the Calguns.nuts Foundation and to every other so called gun-rights group which support them – Please stop helping us!