Well, the Second Amendment Foundation (SAF) has once again proved that a definition of insanity is doing the same thing over and over again while expecting a different result each time.

Or perhaps the head of the SAF, Alan Gottlieb, knows that he is going to lose but files these concealed carry lawsuits to entice the Kool-Aid drinkers to give him money.

In any event, the same SAF lawsuit was filed by the same SAF lawyer with a different plaintiff in Missouri and lost (Plastino v. Koster). This time, the lawsuit (Knutson v. Curry) was filed in Montana, which is in the 9th Circuit where every Second Amendment case is languishing while we wait for an en banc decision in two concealed carry cases, brought separately by the NRA and the SAF.

The SAF concealed carry lawsuit currently pending before an en banc panel of the 9th Circuit Court of Appeals (Richards v. Prieto) is based on a logical contradiction. The SAF attorneys argued that there is no right to carry firearms under the Second Amendment, be they carried openly or concealed, and therefore they have a right under the Second Amendment to concealed carry permits. 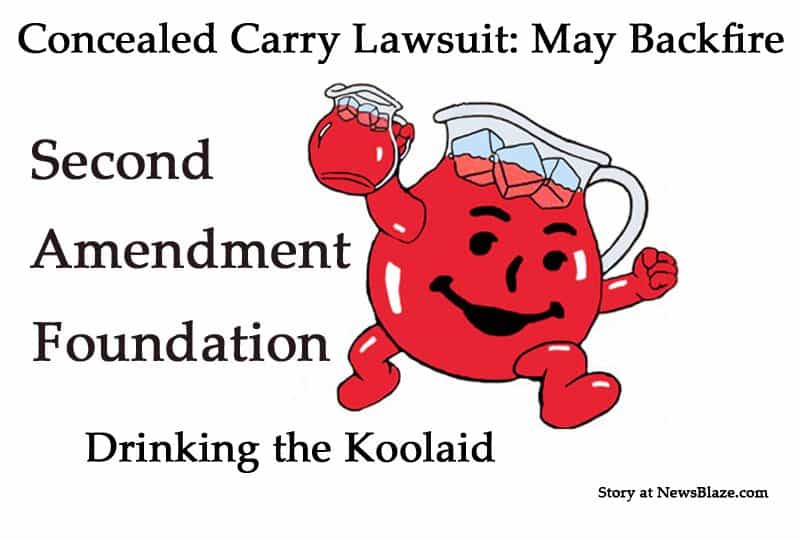 Unfortunately, law school students are not required to pass a Freshman logic course and bar exams do not test for basic logic. This explains volumes about lawyers and judges but that is a topic for another day.

This time around in the new Montana lawsuit as in the failed Missouri lawsuit, the SAF argues that there is a Second Amendment right to carry a concealed handgun and that Open Carry poses a danger to the Plaintiff. Why? The SAF lawyer did not say in this case out of Montana anymore than he explained why in his case out of Missouri. The Federal judge in Missouri dispensed with the SAF’s unsubstantiated claim in short order saying:

“[T]he argument that Mr. Plastino might be the victim of a criminal attack, and that he could thwart that criminal attack if only he could carry a concealed gun, as opposed to openly carrying a gun, is nothing short of pure speculation.” – Plastino v. Koster, No. 4:12-CV-1316 CAS. (April 24, 2013)

Readers should take note that I said lawful self-defense. Concealed carry is always more effective if you are carrying a weapon for the purpose of a secret/tactical advantage or assassination but that has never been considered lawful self-defense under the Second Amendment by any court in our history. To the contrary, that is why concealed carry has never been considered to be a right under the Second Amendment.

Putting aside the fact that the same lawyer filed the same case (with a different plaintiff) in Missouri and lost, Montana is in the 9th Circuit which has a prior precedent which could result in nobody getting a concealed carry permit in Montana -> Silveira v. Lockyer, 312 F. 3d 1052 – Court of Appeals, 9th Circuit (2002)

Silveira involved a challenge to the California “assault” weapons ban which the court upheld. Crucially, the court also struck down the retired police officer exemption saying that:

“We find, however, no rational basis for the establishment of a statutory exception with respect to retired peace officers, and hold that the retired officers’ exception fails even the most deferential level of scrutiny under the Equal Protection Clause.” Id at 1056.

The Plaintiffs in Silveira did not seek to overturn the retired police officer exception. They had argued that the exception for retired police officers formed an equal protection basis entitling them to possess arms prohibited by the California Assault Weapons Control Act. Instead, their argument backfired and the plaintiffs wound up shooting themselves in the foot.

Ironically, had the SAF argued in both the Plastino and Knutson cases that the prohibition is unconstitutional based on alienage, they would have a much better case. You might not see the distinction but as far as the courts are concerned, it is the difference between a possible win and a certain loss.

But the SAF didn’t limit their claim to alienage.

Instead, the SAF argues that there is a Second Amendment right to concealed carry and that is the basis of its equal protection challenge. Because of the prior, binding precedent in the 9th Circuit Court of Appeals, this latest SAF lawsuit may very well result in the 9th Circuit Courts striking down the law which provides for the issuance of concealed carry permits altogether.