It was four years ago today that the battle began and continues today. Much to my surprise, the Chief Judge of the 9th Circuit Court of Appeals granted my Amicus motion in the combined en banc cases of Peruta v. San Diego and Richards v. Prieto – two concealed carry cases out of California.

I have a pending motion to participate in the en banc oral arguments to take place on June 16, 2015. If that motion is granted as well then I will be the only one speaking in defense of the Second Amendment Open Carry right as all of the Plaintiffs in both the NRA and SAF lawsuits claim that there is no right to openly carry firearms for the purpose of self-defense.

It was four years ago today that I began asking for donations to fund my lawsuit challenging California’s 1967 ban on openly carrying loaded firearms in public for the purpose of self-defense and for other lawful purposes.

There are other Constitutional challenges in my lawsuit as well but they are unlikely to be reached if the court of appeals holds that Open Carry is the right and “No!, we don’t have to give up our Fourth Amendment rights in order to exercise our Second Amendment rights.” 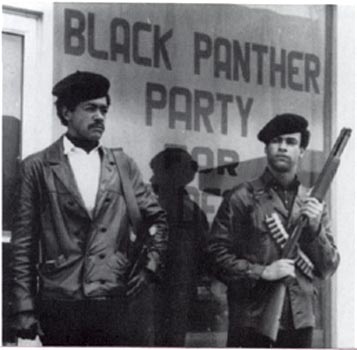 In 1967, members of the Black Panther Party for the Purpose of Self-Defense were openly carrying loaded firearms in and around Oakland California which annoyed White police officers and White bureaucrats who in turn asked their White Assemblyman to write a law banning them from bearing arms, which he did.

On May 2, 1967 the Black Panther Open Carry ban was being heard in an Assembly Committee meeting. Approximately 30 members of the Black Panther Party staged a peaceful, armed and perfectly legal protest in the State Capitol building.

This protest frightened a lot of White legislators. The ban quickly became law. It is well settled law that racially motivated laws, even if they have a legitimate purpose (which the 1967 ban does not have) are unconstitutional, particularly if the law is disproportionately enforced against minorities, as this one has been by a 3/1 margin.

It is also well established law that a person does not have to violate a law in order to challenge the law. The magistrate judge and district court judge assigned to my Open Carry case held that the only way a racial challenge can be made against the ban is if a minority claims in his Federal lawsuit that the law has been enforced against him because of his race. Never mind, that once a minority has been charged with violating a law (or any person regardless of his race) he doesn’t get to challenge the constitutionality of the law in Federal court. He can only challenge the law during his criminal trial.

The district court judge must have thought that I would never file an appeal because not only did his decision directly conflict with many US Supreme Court decisions it also directly conflicted with the appellate decisions of this circuit and other Federal circuits.

For me to lose on appeal, the 9th Circuit Court of Appeals would have to reverse decades of its own case law, create splits with other Federal circuits, and plainly ignore decades of US Supreme Court binding precedents which would in turn make the granting of my cert petition to SCOTUS an almost certainty.

I Am Officially An Amicus In The En Banc Hearing of Peruta v. San Diego

On April 16, 2015 the Clerk for the 9th Circuit Court of Appeals received my motion to file an Amicus brief and the attached Amicus brief wherein I predicted that mine would be the only Amicus brief filed which defended the Second Amendment Open Carry right. On April 20, 2015 the Chief Judge for the 9th Circuit Court of Appeals issued an Order granting my motion. By doing so not only was my Amicus Brief entered into the record, I officially became an Amicus to the combined en banc case of Peruta v. San Diego/Richards v. Prieto.

Keep in mind that I am not an attorney and the Court granted me Amicus standing as an individual. I am not aware of any other case where this has happened.

I hit this point head-on in my motion. I told the en banc court:

“If this motion is denied and if this court publishes a decision casting doubt on the clearly established Open Carry right before Nichols v. Brown is decided then it will be an historic tragedy that it did so with nobody arguing in defense of the right to openly carry firearms for the purpose of self-defense which applies: in the home, in the curtilage of one’s home, on his private residential property, in and on his motor vehicles including any attached camper or trailer and in non-sensitive public places. All of these places, including an in-home nexus which is absent in both Peruta and Richards are at issue in Nichols v. Brown but were not raised by the Peruta and Richards plaintiffs.”

If my motion to participate in the en banc oral arguments is granted then nobody will be more surprised than me but my motion serves several strategic alternative purposes not the least of which it puts the court on notice that there is a case on appeal in which the Second Amendment Open Carry right is squarely at issue.

Charles Nichols is President of California Right To Carry

To make a personal donation to help defray the cost of Mr. Nichols’ lawsuit, follow the links below.