The Emperor strikes again! It is becoming a regular occurrence. Emperor Barack Hussein Obama has once more torn a strip off the U.S. Constitution in the past week, by illegally using his magic pen to say that our laws as a sovereign nation mean nothing.

Mirroring the illegal immigrants he has allowed to flood across our borders, Obama illegally overstepped his office as president by using an executive order that places the law into his hands, taking it away from “We the people.” His executive order says that anyone who illegally jumps our borders, overstays a visa or crosses during pregnancy may become a U.S. citizen without warrant of any kind.

We can now expect that millions of people will take the opportunity to storm our borders in the coming weeks, months and years, thus rending our country, no longer a country, but a destination that places no value on sovereignty or its own laws.

We are to be an open borders country, and Obama has been purging our military, so we can soon save a lot of money each year by abolishing it altogether. If our president and Congress refuse to secure our borders against the entry of illegal aliens and contraband, and the people don’t care, then we probably don’t need a military.

Normally, borders define a nation and the primary reason for our armed forces is to keep our enemies as far from our shores as possible. 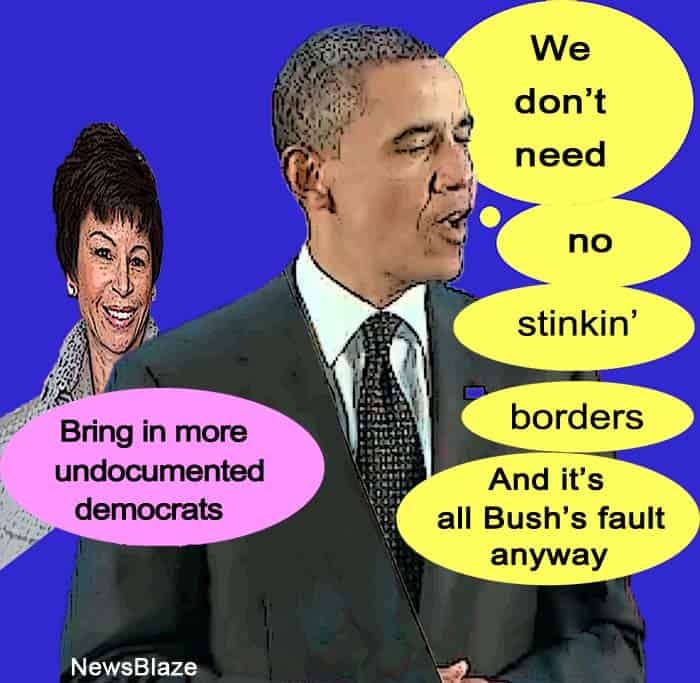 We are apparently so welcoming that foreign nationals easily enter the U.S., and today they are doing so in much larger numbers. They much more easily easily evade the scrutiny of Customs and Border Protection inspectors at ports of entry because the administration prevents them from doing that job.

Terrorists, spies and enemy combatants can much more easily enter our country and pose a threat to national security and public safety. But that doesn’t bother Obama or Congress. The past five presidents failed to secure our borders.

If History Is Our Guide

If history is indicative of the future, the next five presidents and Congresses won’t secure our borders, either, especially when these new invaders will soon be able to vote for open borders.

Any unilateral Executive action on immigration by Barack Obama must be seen as a blatant subversive act and an open attempt to usurp the constitutional authority of Congress – not that Congress seems to care about the open borders.

For those who actually care about the Constitution – and that seems to exclude a large percentage of Congress, Obama’s actions may rise to the level of an act of treason against the U.S. Constitution and the American people. It is an overt breach of trust and a violation of Barack Obama’s oath of office, which he has taken three times now, since his first was a debacle.

It could be that his hands were behind his back, with his fingers crossed, each time.

For the record, there is nothing in Article II of the U.S. Constitution granting the Oval Office the power to usurp, subvert or ignore the laws of the United States as established by Congress.

America has enemies, whose goal of going behind ‘enemy lines’ is now much easier. They can much more easily blend in, and, as Michael Cutler says “hide in plain sight.” When aliens evade the inspections process or otherwise gain entry into the U.S., intent on violating our immigration and other laws, citizens expect that an effective interior enforcement program must be able to identify these people, locate them, arrest them, and seek their removal from the U.S. to backstop the Border Patrol and the inspections process conducted at ports of entry. That interior enforcement has been crippled by the Obama administration.

Our immigration laws, which are still in force, because they have not been repealed, do not make any distinctions that involve race, religion, or ethnicity. Their purpose is partly to keep out aliens, such as criminals and terrorists, who pose a threat to the safety and well-being of America and Americans. Title 8, U.S.C. 1182 provides a list of the classes of aliens who are supposed to be prevented from entering the U.S.

With no effective and credible program in place, aspiring illegal aliens around the world, now see the borders of the U.S. as the ‘finish line’ of their quest. Obama recently ordered the printing of 34 million Green Cards, but he tells us only 4.6 million illegals will enjoy amnesty. Is he a bald-faced liar? What do you think?

Why Does Obama Call Them Immigrants?

We know around 20 million illegal aliens jumped our borders, broke our laws, forged Social Security cards, and work and live in violation of our laws. They steal jobs from our citizens, as well as engaging in shoplifting, murders, drunk driving, rapes, driving illegally and using and abusing our welfare systems.

If you care, you might like to give a word to the man who loves his pen and his phone: Obama comment line: 1(202)456-1111 or 1414! The man we now face in the White House thinks nothing of breaking our laws or tearing up our Constitution, a Constitution that was paid for with the blood of millions of men and women. In his youth, he chose to smoke pot, do drugs and lie his way through college and into Congress, painting himself as a foreign student when it suited him and as a native American when it suited him.

The reason he lacks any comprehension of what America stands for is that he still hasn’t proven he’s an American, and although there is still a lot of discussion about that, at some time in the future, we will discover his true identity, but by then it will be too late.

What We Don’t Know About Him

There are many things we don’t know about Barack Obama, because he, the State of Hawaii, his university and various other people have worked very hard to prevent anyone from accessing that information.

History will prove where his grandmother lifted his Social Security Card number from, because he didn’t possess a valid U.S. birth certificate. He didn’t register for the draft, but somehow obtained a backdated draft card. He registered as a foreign student when attending Columbia and moved on to Harvard with grades that couldn’t get him out of high school. At some point, the hammer of truth will descend on Obama. In the meantime, whether he is a real natural born American or not, he violates our laws, fills our White House and government with like-minded people, and gifts lawbreakers with amnesty. At some point, he may grant himself amnesty from his own larceny of the truth he keeps from the American people.

Historians will not be kind to the foremost liar in American history.