What makes this show so different from most Las Vegas comedy shows is that ‘all ages’ are allowed and as an exception to the rule of live comedy shows there are no four letter words or insinuations to embarrass parents, kids, or even grandma.

The show ‘Brian Hoffman’s Remembering Red – A Tribute to Red Skelton’ is a Tribute to comedy legend, Red Skelton, whose career spanned over forty years of stage, screen, radio, and television. 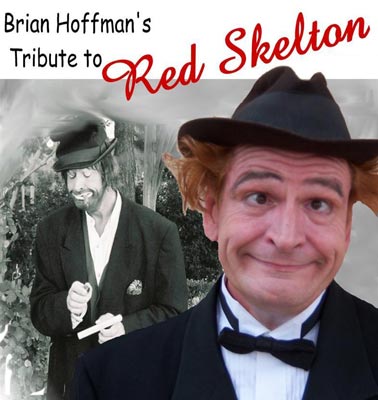 The star of this one man production is Brian Hoffman who not only looks like Red Skelton, but has mastered the voices, characters, movements, comedy material, and impersonations of the man who for many years was known as ‘America’s Funniest Clown.’ Showtime is at 2pm every Monday afternoon at the Royal Resort hotel (on the Las Vegas strip next to Steve Wynn’s Encore Casino). There are several all ages, family friendly shows at the Royal Resort, including Dixie Dooley’s ‘Magic Mystifier’ show and Larry G Jones’ multi-award winning singing impressionist comedy show.

In fact, Brian’s Red Skelton tribute show is a spin-off of another Las Vegas kid friendly show, Larry G Jones – ‘The Man of 1002 Voices.’ After over eight years of impersonating the voices and likenesses of Las Vegas’ biggest headliners Larry’s opening act and emcee for the last year and a half has been Brian Hoffman. Larry’s show (which is similar to Terry Fator but without puppets) utilizes his multi-impersonations to mimic, pay homage to, and parody many of Las Vegas’ top comedy shows that often have age restrictions on being a kid friendly show. Some of these shows include Cher, Carrot Top, and Cirque Du Soliel’s newest shows, Criss Angel Believe at the Luxor and Viva Elvis at the new City Center.

With so many Las Vegas shows how do you find the right one for the whole family? A few of the Las Vegas comedy shows that may have age restrictions include Frank Caliendo at the Monte Carlo, Terry Fator at the Mirage, George Wallace at the Flamingo, Louie Anderson at Excalibur, Bette Midler at Caesars Palace, Rita Rudner and Mac King are in Harrah’s and they are amongst the biggest names on the Las Vegas strip. But which one of these shows is right for the entire family? Most of these shows have age restrictions, not allowing children less than 18 years of age to attend.

Due to the overwhelming response of Red Skelton fans that saw Brian opening up for Larry G Jones, Brian is starting his own afternoon comedy show. It took years of reviewing old Red Skelton comedy shows, researching his skits and comedy routines, compiling them on paper, and after dozens of rewrites, an intimate Las Vegas showroom finally gave birth to “Brian Hoffman’s Remembering Red – A Tribute to Red Skelton.”

Packed with hilarious jokes and routines that Red performed in his variety show, one of Red’s most loved characters, Freddie the Freeloader, closes the show with a heart touching routine that audiences are sure to remember for years to come. As a kid friendly show, all the jokes and comedy bits hold true to Red Skelton’s belief that you don’t have to use four letter words to be funny.

Every Monday at 2pm, Brian takes the stage performing as Red Skelton along with some of his characters, for a fun filled, family friendly comedy show for ALL ages. The 90 minute comedy show will have you rolling with laughter as you remember Red.

“Brian is really funny as Red Skelton. Go to this show if you love to laugh!” – Vegas4Locals.com

For more info and a complete show schedule, go to http://www.RedSkeltonComedyShow.com For a limited time save money by using discount code 2010 to get your VIP tickets with autographed photo and preferred seating (regularly $34.95) for just $20.10 (online ticket sales only)

“Goodnightnow and may God bless”