With President Biden saying that US will leave Afghanistan in 2014, US Secretary of State Hillary Rodham Clinton today stated that major US combat operations will end in Afghanistan

In an interview with Reena Ninan of ABC News

in Lima, Secretary Clinton says that in 2014, according to the decisions that were made by NATO which includes the United States, they would end major combat operations in 2014, the end of the year.

“What has been discussed is how to train and support and provide specific forms of assistance to the Afghan National Security Forces.” -Ms. Clinton 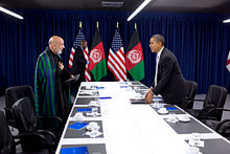 She adds that that there is an enduring commitment that a number of countries have already made to the Afghans, including the United States, but also the UK, France, and others have said they don’t want Afghanistan to end up the way it did after the Soviet Union left and those countries that had been funding the fight against the Soviet Union retreated.

“So no one wants that to happen.” -Ms. Clinton

No one wants Afghanistan to become a safe haven for terrorists again, Ms. Clinton noted.

“But what that will look like, who will be involved– all of that is still to be considered.” -Ms. Clinton

In July this year, with its commitment to strengthen Afghanistan’s institutions, the United States of America announced that Afghanistan is officially designated as its major non-NATO ally.

In her remarks with Afghan President Hamid Karzai in Kabul, US Secretary of State Hillary Rodham Clinton said the security situation of Afghanistan is more stable.

The Afghan National Security Forces are improving their capacity to protect the Afghan people.

The Afghans are in the process of taking the lead in more than 75 percent of the population’s living areas in order to provide security.

The Government of Afghanistan has signed partnership agreements with many countries, and the United States is among those.

Both nations have worked together to set forth a long-term political, diplomatic, and security partnership, and it entered into force just a few days ago.

The US government sees this alliance as a powerful symbol of its commitment to Afghanistan’s future.

Ms. Clinton is looking forward to convening, along with Foreign Minister Rassoul, the new U.S.-Afghanistan bilateral commission to intensify our cooperation.

US-Afghan Strategic Partnership Agreement is not aimed at any other country, she noted.

The United States wants to continue to invest in doing what the Afghans believe they need.

The United States will continue to protect Afghanistan from any efforts by insurgents and outsiders to destabilize Afghanistan.

The US government has supported President Karzai in his effort to have an Afghan-owned, Afghan-led reconciliation process.

The US government pledges to continue its support and to work with the Afghans to get more international support, Ms. Clinton stressed.

July 2011 marked the beginning of a responsible transition that will see Afghan forces gradually taking the lead in securing their own country.

By 2014, the process of transition will be complete, and the Afghan people will be responsible for their own security.

The Afghan security forces move into the lead, the United States continues to reduce its military footprint. Its mission will change from combat to support. The remaining 23,000 “surge” troops in December 2009 will leave Afghanistan by the end of summer 2012.

The U.S. government has made significant progress towards their goals.

Reports say the U.S. government is redoubling its efforts to pursue a peaceful end to the conflict in the region.

The U.S. government has taken tangible steps to advance Afghan reconciliation and reintegration initiatives, including support to the Afghan High Peace Council and provincial police and reintegration councils.