The Iranian regime has entered its fortieth year of existence. It has a record of forty years of violence, and violations of the most fundamental rights. The regime engaged in terrorism and the demolition of the nation’s resources, interference in the affairs of neighboring countries and more. Forty years of oppression and repression of all forms of opposition and resistance, under the leadership of the Supreme Leader.

If during the Shah’s time, Iran was under the influence of a despotic dictatorship, under the mullahs, the dictatorship claims to be theocratic. That elevates the Supreme Leader to the rank of Divinity. However, after 40 years of atrocity, the regime is increasingly shaken inside the country by the ongoing discontent. There are now widespread calls for change and its isolation internationally, as it acts like a chicken with its head cut-off.

Since December 2017, Iran has been shaken as a whole (more than 160 cities according to authorities) by numerous strikes and popular demonstrations that have shaken the very foundations of the regime. Whether in Tehran, Mashad, Tabriz, Kazerun or Isfahan, the Iranian people first protested against the cost of living, chanting slogans such as, “We are hungry.” However, very quickly, after getting no response to their pleas, the protests and uprisings took on a political turn. Then the people demanded #IranRegimeChange.

Workers, students, retirees, truck drivers, bazaar merchants, youth and women, took to the streets. In fact, the first to chant “Down with Khamenei” was a courageous woman. In the face of these growing protests, the regime’s repressive machines, made up of the Revolutionary Guards and other military forces, like Bassij militias, violently repressed the demonstrations. However, not being able to silence them completely, revealed the regime’s inability to satisfy the demands of an impoverished populace who thirst for justice, freedom and human rights.

Protests and strikes continue today. Amnesty International revealed on 24 January 2019 that more than 7,000 demonstrators, including workers, environmentalists, minority rights activists, students, trade unionists and lawyers, have been arrested. Hundreds more have been sentenced to imprisonment or flogging.

According to the opposition, the National Council of Resistance of Iran (NCRI), some 50 people were killed in the course of these Iran protests. Fifteen died in custody following their arrests.

Yet this wave of repression was not enough to contain the rage of a nation which already experienced the executions of 120,000 members of the opposition. The people remember the 1988 massacre of 30,000 political prisoners. The forty years of the Iranian regime’s rule is also known as forty years of torture and execution and forty years of repression and fear. This regime is now faced with a nation determined to overthrow the theocracy in power and demands for regime change in Iran.

Why Iranian Population Living in Precariousness?

It should be recalled that Iran is a country steeped in wealth and resources. Unfortunately, all this wealth is being squandered in the race for weapons of mass destruction and ballistic missiles; in the financing of the proxy wars in Syria, Yemen, Iraq, Lebanon and Afghanistan; in the financing of terrorist groups such as Lebanese Hezbollah or for the internal repression with billions of dollars swallowed up by the Revolutionary Guards to control the people.

Iran’s total budget is used for the regime’s military spending and its export of terrorism, therefore such an anti-human regime does not allocate anything to the people.

What Is the Credible Alternative?

With the fall of the Shah’s dictatorship in 1979 and the rise to power of Khomeini, who had long remained in exile in Iraq and France, power was radicalized in the months that followed. The fallen regime had given way to an even worse regime: a fundamentalist theocracy. The rights of women and ethnic and religious minorities were totally violated. Repression to any form of opposition was advocated. Faced with this totalitarian and fundamentalist regime, a strong Resistance emerged over the years.

Mrs. Maryam Rajavi, President-elect of the NCRI, is the leading figure of the Iranian Resistance. She has been campaigning for freedom and democracy for nearly 40 years. The NCRI enjoys a high profile not only within Iran, but also with the international community. The NCRI advocates a pluralist and secular republic. 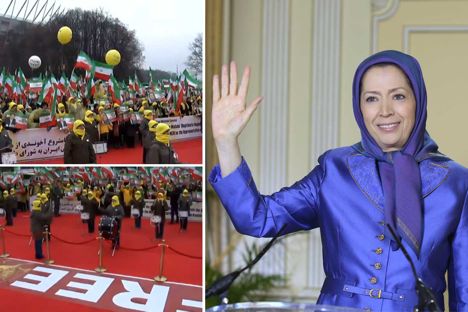 The NCRI held two grand rallies within the spam of seven days. One in Paris and the other just yesterday, simultaneous with the Warsaw Summit with vibrant slogans of, “Democracy, freedom with Maryam Rajavi.”

Iranians who attended the rally in Warsaw wanted the conference to highlight the drastic violations of human rights in Iran and more importantly, the desire of Iranian people for regime change in Iran to be heard.

If in 1979, the Shah was deposed thanks to the Iranian people’s revolution, today, the situation in Iran is quite explosive as the Iranian people cry in unison, for change. The mullahs find themselves 40 years later in the same situation as their predecessor, knowing that their time is up and change is inevitable.