America should protect the 3,000 residents of Camp Liberty and not ‘sell them out’ during the nuclear negotiations, former US Governor Howard Dean has told a conference in Paris.

Iran already lied about its aim of obtaining a nuclear bomb and the US should not tarnish itself and undermine its standing in the world by making deals with people who will not keep their word, Governor Dean said in a speech on April 12.

He told delegates: “We already made a deal with the mullahs and they lied and they continued their nuclear program.

You know their record, more executions under the so-called moderate Rohani than ever before, public hangings, public whippings, not just of criminals.” 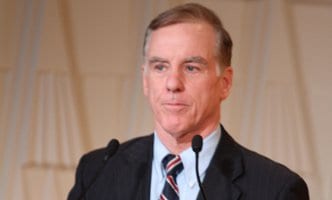 “People are being murdered in Iran because they simply disagree with the mullahs.

If they say that they will make the world a peaceful place, let them show it by letting the 3000 people in Liberty. Let them go and let them be relocated in Europe and in United States as they should be.

Any deal that we make with the mullahs must be the freedom of the people at Camp Liberty which the United States of America promised in writing 10 years ago.

Let us not sell our own country and our own principles for a short term diplomatic success.”

Dean added: “It has been 10 years since our commanders in the field signed a paper which 100 people in Ashraf and Liberty had in their possession at the time of their execution by Maliki and the mullahs. When is my government going to stand up for American principles?”

Camp Liberty in Iraq houses thousands of members of Iranian opposition the People’s Mojahedin Organization of Iran (PMOI/MEK) who have lived for decades at Camp Ashraf, Iraq.