Ahmadinejad exposes a taped conversation of Larijani’s brother with regime’s chief henchman Mortazavi, and Larijani accuses Ahmadinejad of conspiracy and Mafia actions, threatening to expose him.

On Sunday February 3rd, the Majlis session to act on a motion of no-confidence against Ahmadinejad’s cabinet minister of Labor and Social Affairs, Abdulreza Sheikhol-Islam, presented a new and unprecedented height in the power struggle between regime’s internal factions.

In that Majlis session, Ahmadinejad played a videotape and embarked on exposing Ali Larijani, head of the Majlis; and Larijani called Ahmadinejad’s action mafia-like, and threatened to expose him, in return. During the no-confidence session against Ahmadinejad’s cabinet minister of Labor and Social Affairs, where deputies’ screams constantly interrupted the session, Ahmadinejad exposed the videotape and the text of conversations between Fazel Larijani (brother of Ali and Sadeq Larijani, heads of regime’s parliament and judiciary) and regime’s chief henchman Saeid Mortazavi.

Mortazavi is one of the officials responsible for heinous crimes in Kahrizak prison and killing of many political prisoners; subsequent to revelation of those crimes, Mortazavi was promoted rather than being removed from his post, and was appointed by Ahmadinejad to head the Organization of Social Services. Reading the text of conversations in the meeting between Larijani’s brother and Mortazavi, Ahmadinejad accused Larijani brothers of abuse of power, financial corruption, and receiving bribes. 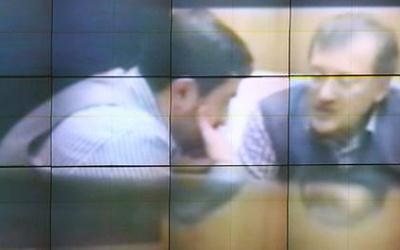 The upset Larijani warned that “the very existence of the society is about to be lost and the society is convulsive” and stated that that expose constituted a conspiracy against the head of the legislative. He added that Mr. Mortazavi “invited a relative of ours to his office and then taped the meeting. So it is obvious that you had a plot.”

The problem is that the President does not respect the very principles of ethics; if the President had something to say, why did he broach it here? Well you could have told me to investigate; you neither told me nor the judiciary and today you said it at the microphone; this is against righteousness, this is against justice; what good is it that we frequently talk about justice, but we drag the very being of the ethics of society to corruption?

Threatening Ahmadinejad, Larijani said: “If, like you, I had videotaped the meeting that your brother, Mr. Davoud Ahmadinejad, had with me and said a lot of things about the people who surround you and the deviated current, their connections with the PMOI, their financial corruption, and connections with foreigners, and then played the tape here today, would that be good?”

When Ahmadinejad wanted to reply to these comments, Larijani did not allow him and said that his time was over. The heightened infighting between the leaders of the regime occurs while a few weeks ago Khamenei said revealing the differences until the elections are over are treason, and on December 28th he said: “Until after elections, any movement on differences, in any shape, is playing in a field that the enemy has prepared.” With intensification of regime’s untreatable crises and the looming presidential elections, the power struggle between regime’s factions will accelerate and further expand in the upcoming months.

An uncontrollable process that-as the Iranian Resistance has previously emphasized-bears news of regime’s entry into its final phase and the era of its overthrow. On Saturday, February 2nd at an international conference in Paris, Mrs. Maryam Rajavi, President-elect of the Iranian Resistance said: “The Velayet-e Faqih regime has lost its pillars and resources for continuing its rule and the era of the overthrow of religious dictatorship has arrived.”