The Somali football federation (SFF) has overwhelmingly praised Somalia’s ambassador to Kenya Sir Mohamed Ali Nur (Ameriko) and his embassy workers for their role in encouraging and assisting the Somali national U 17 soccer squad members who over the weekend kicked their Kenyan counterparts out of the African youth championships qualifier match.

Secretary General of Somali football federation Mr. Abdi Qani Said Arab who talked to reporters upon arrival at the Jeddah Airport in Saudi Arabia on Monday said that Somali ambassador to Kenya and other members of his embassy have taken unprecedented patriotic moves for assisting the Somali football squad. 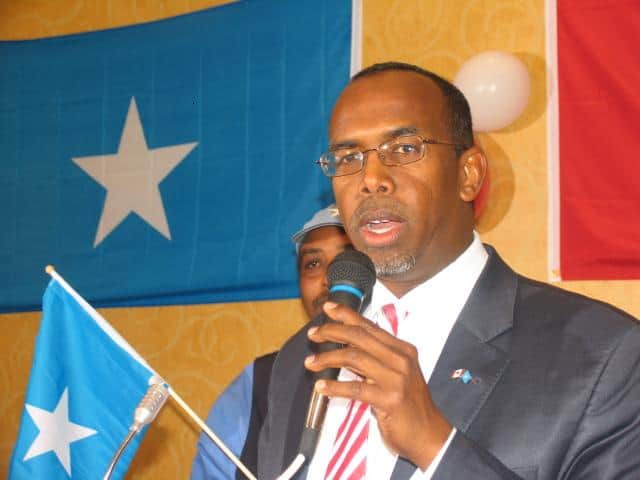 “Our precious ambassador Mohamed Ali Nur (Ameriko) has accomplished his national duties and he did a lot more things for the national youngsters on whose shoulders the nation’s hopes rest and the country’s football history will l always be mentioning him” said Somali football federation secretary General Abdi Qani Said Arab during his media brief in Jeddah Saudi Arabia Monday.

“The ambassador is a very active and patriotic man and we were expecting from him the good task he had done” stated Mr. Abdi Qani who gave details about how the Somali team was prepared and the difficulty circumstances it experienced.

The secretary general said that the national team was trained at the open ground of the Somali police academy, which was not a suitable ground for a national team to exercise, but the circumstance compelled it, because the country’s international style football facilities are currently not ready to train.

He praised the national team coach, his deputy and the players whom he said had the full capacity to endure the difficulty situations under which they have been working.

He also expressed his deep sympathy for the Somali patriots in Kenya saying they had shown a huge national emotion which encouraged the Somali youngsters to redouble their efforts so that they kicked their rivals out of the competition.

Although the Somali football federation has been working in a chaotic country totally fenced by lawlessness, hence the SFF became the country’s biggest flag carrier after it succeeded to raise the Somali flag over the international football gatherings.

The general secretary’s comments come as today a high level Somali football delegation under the leadership of president Said Mahmoud Nur (Mugambe) reached the Saudi Arabian city of Jeddah where they will participate in the election congress of the Union of Arab football Association which will kick off on Tuesday.