As part of its regional development programs, the Somali Football Federation launched the constriction of a new sports centre in semiautonomous Somali state of Gal-mudug with the regional vice president Abdi Samad Nur Guled and SFF deputy president for regional development Abdullahi Abw Hussin jointly laying the foundation stone over the weekend.

A small ceremony to mark on the launching of construction work was held at the open ground of Abdullahi Isse where the new centre is being built which named after Abdullahi Isse Mahmoud who was one of the most active young Somalis who scored the country’s independence in 1960. 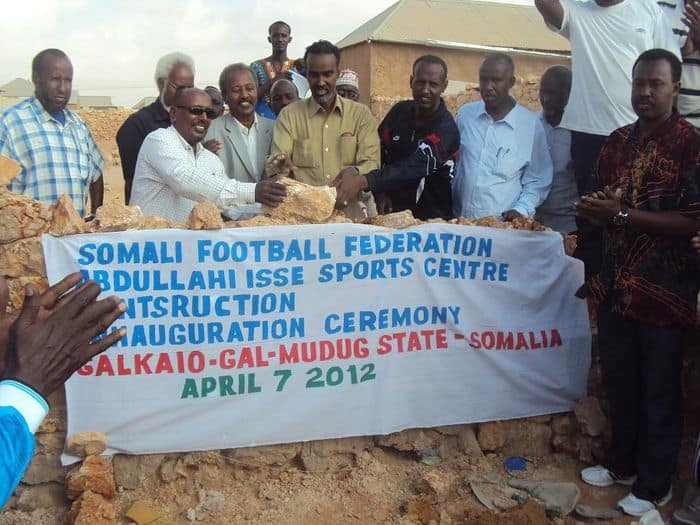 “With peace slowly returning to Somalia we are committed to promoting football every where in Somalia even in smaller villages and that is why we are now holding the development courses or constricting this centre” the SFF secretary General said.

One of the friendly educators who were invited to address at the launching ceremony of the construction was Galkaio University chairman Professor Abdulkader Mohamed Shirwa who said that his GU university group will work with the SFF in terms of the organization of university games n the Gal-mudug regional state.

“Today is a very mentionable day in our history and we are deeply indebted to Somali Football Federation for constructing this large centre for us” added high profile politician Ai Hashi Dhorre who is candidate for the region’s presidency.

Somali Football Federation deputy president for regional development Abdullahi Abow Hussein called on the region’s business companies and communities from the region living abroad to play a key role in financing sport in their region.

“Today the SFF is starting the construction of this large centre, but what we need is your help to reach our goal, because as you know every region or country is developed by its people and that is why I am sending this message to the business people, politicians and outsiders” the SFF deputy president noted.

The regional minister for youth and sports Sadeq Dahir Mire praised Somali Football Federation for the great move forward. “This region has witnessed two historic events this week; one was the development courses for trainees from four regions in the country and the other is the start of the construction of this centre” the minister said in his address.

Regional state deputy president Abdi Samad Nur Guled thanked Somali Football Federation for the construction adding that the new centre will help the development of football and other sport in the region which has never had a football or any other sporting facility.

“Current young age people are very much luckier than us, because in my era there was no developed sport and we hadn’t got such chance to have a football facility or football federation holding such development courses” the regional deputy president said before he and Somali football Federation vice president for regional development Abdullahi Abow Hussein jointly laid the foundation stone of the new sports centre.