The biggest graduation ceremony to be witnessed in war-torn Somalia in more than two decades has been held for over 500 students who were taught sport and other important job skills by the Somali Youth League SYL the 2nd for the past six months.

Somali president Sheik Sharif Sheik Ahmed, Mayor of the capital Mahmoud Ahmed nor, other key government officials, parents and students attended Wednesday’s ceremony which intended to mark the conclusion of 6 month-long different courses. The graduates were taught sport and other job skills including nursing, secretariat, computer, tailoring, mechanics and journalism.

The sporting lessons taken during the courses include football, table tennis, chess and athletics. 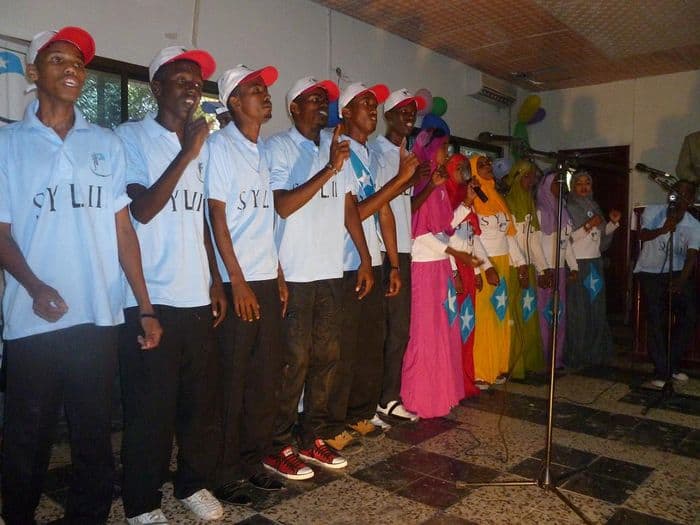 “We say youths are the leaders of tomorrow so if they are not educated they will not have the chance to serve their country’s interests. Our programs are mostly targeting those whose families cannot afford to pay for their education and street children or other wise they will be susceptible to falling into the hands of notorious criminals in the country,” Eyni Ahmed noted.

Mayor of Somali Capital Mahmoud Ahmed Nor added that after years-long struggle the Old SYL scored Somalia’s independence in 1960 and that the current SYL II was following behind the footsteps of the fathers of independence in accordance to what they are doing.

“More than two decades passed, we forgot that this country belongs to Somalis, but fortunately SYL II has taught many of us that this country is ours. Another very important outcome is that children are protected from being used as warriors by Al-shabaab terrorists,” the mayor emphasized during his address at the graduation ceremony.

He called on other NGOs operating in the country to do a real job as SYL II is doing. During the ceremony a minute of memorial silence was observed in remembering hundreds of thousands of youths killed in Somalia conflict since the country fell into anarchy in January 1991.

Somali Deputy Minister for education Sheik Abdulkader Sheik Ali told the ceremony that his ministry and SYL II have been jointly working in the field of educational enhancement in the country for the past several years.

“It seems that Somalia is emerging from the age-old cultures which banned women from leading. Now we see that this very precious youth group is operating under the leadership of Eyni Ahmed who is a very creative young woman,” the deputy minister added before handing over the microphone to Somali President Sheik Sharif Sheik Ahmed.

Somali President Sheik Sharif Sheik Ahmed said the ceremony is very different from so many ceremonies he has participated in the past.

“I am very grateful to SYL II for the great job and I can describe SYL II as the sign of Somalia’s recovery,” president Sheik Sharif Sheik Ahmed told the participants of the ceremony before presenting certificates to the young graduates.