Kenyan authorities have identified the mastermind behind the deadly terror attack on Garissa college in Kenya, as Mohamed Kuno, known as Gamadhere.

The Kenyan government soldiers killed four Alshabaab gunmen after the terrorists took hostages at the school.

Witnesses spoke of the gunmen firing indiscriminately as they assaulted the school near the Kenyan border with Somalia.

The terrorists were said to be targeting Christians and non-Muslims, according to CNN.

The reward for Mohamed Kuno, a native of Kenya, is 20 million Kenyan shillings, which is about $215,610 U.S. dollars.

Authorities named Mohamed Kuno as a wanted terrorist in December and he has been on the run since then, according to the Daily Nation, a Kenyan news outlet. 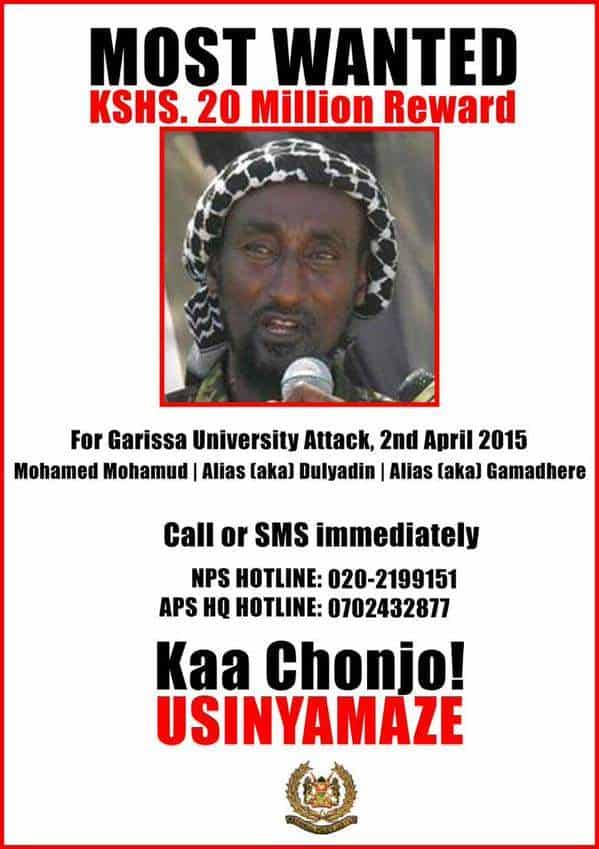 The Daily Nation said a security briefing identified Mohamed Kuno as a former teacher and principal at Madrasa Najah in Garissa.

He worked there from 1997-2000, according to allAfrica.com; he also worked for the Al Haramain Foundation between 1993 and 1995, when he was known as Sheikh Mahamad Afte.