The South Africa-based aid agency Gift of the Givers who has been waging life-saving humanitarian campaign in Somalia for the past two years has now established its own branch.

The aid agency is in charge of fostering sport for peace programs in a bid to ‘sweeten’ life for Somali children and teenagers through sport to make them forget the past wounds caused by civil wars in the country. 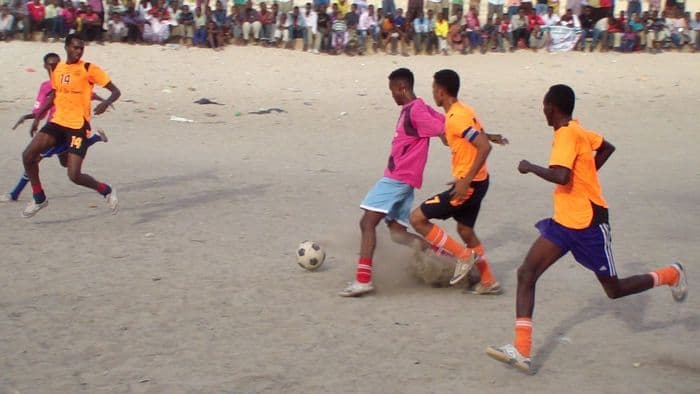 The “Gift of the Givers” which was one of the first aid agencies who suddenly responded to the severe famine that hit the horn of African country in 2011 has now turned to the field of sports to give particular consideration after it was very successful in its previous attempts of life-saving.

The organization’s head of logistics and sports programs (Somalia branch) Mr. Said Ibrahih Hussein said in a press statement that his agency had drawn special sports programs for children and teenagers at IDP camps in the country.

“We want them to enjoy in sports competitions after we have saved their lives. Sports makes them stronger, healthier and will protect the youth from falling into crimes,” Mr. Said Ibrahim Hussein noted in his press statement.

For the past several days Gift of the Givers have distributed footballs and other equipment to children and teenagers at IDP camps in different neighbourhoods in Somali capital where football competitions were also held for teenagers at camps.

“We have close relations with sporting organizations in Somalia and in particularly the football federation and they know what we are doing in terms of sports promotion at IDP camps,” added Said Ibrahim Hussein who is also a long-time member of Somali sports Press Association.

Meanwhile, the Somali Football Federation has praised the move by Gift of the Givers office in Somalia which was one of the first humanitarian agencies who came to help famine-hit Somali people in 2011.

“We are very grateful to Gift of the Givers for understanding the importance of football for the children and teenagers at IDP camps. The Gift of the Givers is already feeding the needy people and now they started to sweeten life for children at IDP camps through football so this move shows that the agency wants to help the Somali people in all sides,” Somali Football Federation Secretary General Abdi Qani Said Arab said in a statement.