Alpena Sportswoman Gets Giant Bison in B. C., Canada

PINK MOUNTAIN, BRITISH COLOMBIA – Susan Peterson-Tuohy, 60, longtime hunter and outdoors woman and souse-chef at the 19th Hole restaurant in Alpena, Michigan has one giant ‘fish’ story to bring home. Only she has the meat, horns and photo to back it up.

Hunting with her retired husband Gary, she bagged a one ton plus monster bison in Pink Mountain, Canada. The area allows limited bison hunting because the wild beasts are not native to the area. The 1000 plus heard are descendants of an escaped group of 50 from a local outfitter in 1968. On this trip they were guided by the good folks at Sikanni River outfitters. 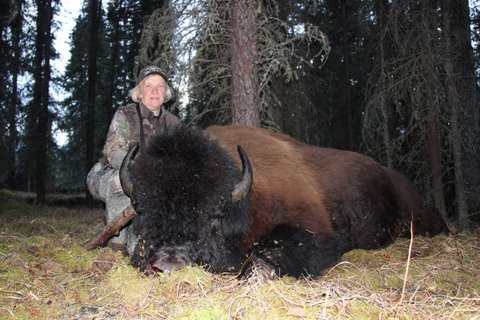 Besides Stone Sheep, Pink Mountain’s other claim to fame is the high population of rare Arctic butterflies found amongst the tall lodge pole pines. They are attracted by the region’s fireweed blossoms. The area has perfect mountain goat habitat and an abundance of moose, elk, caribou and both white tail and mule deer. The rugged mountain and foothill terrain is also known for recent discoveries of dinosaur bones especially the marine Ichthyosaur.

Gary, a retired pilot for Northwest Airlines is a world-wide hunter and fisherman. He had harvested a much smaller bison last year in Sonora, Mexico. He said, “Susan’s monster was nailed with two heart shots.” The former aviator from Plymouth added, “She used a 300WSM and it was about 40 yards away. We stalked the beast for about four miles. It was an effort because the terrain was inclined and lumpy. I can tell you, we were both out of breath. Our guide, Mike Hammett put us in a great position.”

Susan, an avid golfer in the summer months was inducted into the Alpena Sports Hall of Fame in 1988. Peterson-Tuohy joins her father, Gerald and her two brothers, Gary and Bill with that honor.

Susan, an Alpena native and Michigan State graduate, will sure know what to do with the bounty of meat. She has helped her mom, Marie Kaisersheski-Peterson, at their famous upper Michigan eatery north of Alpena for most of the 55 years of operation. Currently, the popular restaurant is operated by Sue and her brother Bill. The 19th Hole is noted for home-made soups and a profusion of big-fish tales from Lake Huron.

“We saw about 20-25 bison at night and started tracking them at first light. With intermittent snow and about 30 degrees F, we got on their tale,” added Susan. “I picked out the big one right before they got spooked. I had to remember to breathe because the elevation and the visuals make an excitement,” she further said.

Gary chimed in, “We had to quarter and debone the meat, sack it and backpack it out to the grass strip we flew into. It is quite an effort but very worthwhile. We share it with camp; everything gets used in sustenance hunting.” Resources are limited at the remote mountain cabin that they called camp, so planning is paramount to a successful hunt. “We really got the feel for indigenous style hunt. We got to experience the hunt how it may have gone from the previous century,” added Gary.

Bison is popular with hunters because of the large amount and high quality of the meat.

Besides using the bison meat for food, First Nation peoples have traditionally created a wide variety of tools and items from the carcass. Hides and fur are also used for blankets, wraps, and warm clothing.