It is appropriate that The Clash at Comerica is featuring Central Michigan University. The 7:00 PM start time on April 20, in the game against Michigan State will allow for a lot of pre-game alumni fun for local baseball enthusiasts. The non-league game will also allow the CMU athletic family to honor a local sportsman and alumnus. He got his start in metro Detroit as a long time veteran umpire who made his reputation on the world baseball stage. Dick Runchey is his name and he never shied away from the spotlight.

He will be front and center again as the inaugural recipient of the Collegiate Umpire Award. Runchey, who has worked in the College World Series five times, also umpired in the 1992 Olympic Games in Barcelona, Spain. He is currently an adviser for the NCAA National Umpire Improvement Program.

The College Baseball Foundation announced a new career tribute, the Collegiate Umpire Award which will honor career excellence in umpiring. The new award, sponsored by Honig’s Whistle Stop, an Ann Arbor, Michigan provider of umpire gear, will be presented as part of the National College Baseball Hall of Fame Induction Ceremony.

Dick Honig the founder of the company was an outstanding shortstop for the 1962 NCAA Baseball Champions from the University of Michigan. His coach and mentor was Don Lund who always taught his players special respect for the umpires. 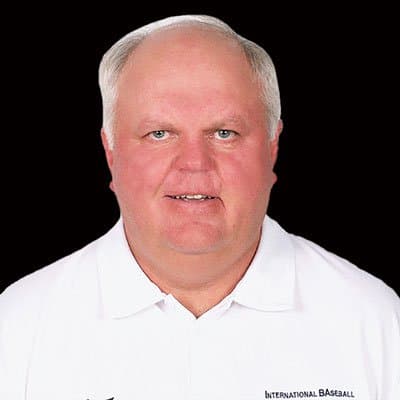 Runchey, currently of Plymouth, Michigan will receive his honor on July 3, in Lubbock, Texas. “For many years we have wanted to honor individuals directly involved in the game of college baseball who fall outside the realm of coaches and players,” said Mike Gustafson, CBF executive director. “Umpires are a key part of the game and Dick Runchey is a fantastic choice to receive the inaugural award.”

Recently I asked Runchey to remember about his road of baseball. “I always wanted to become a Major League player but found out early that you needed to hit. I played at Kimball High School in Royal Oak for coaches, Paul Temerian, Herb Deromidi, and Frank Clouser. I could play defense but even if they threw a basketball up there I couldn’t hit it. All my coaches tried to help but it didn’t work. I did get a lot of walks so I did have a good feel for the strike zone. Coach Deromidi encouraged me to pursue my passion and stay involved in the game,” said the veteran umpire.

The well travelled Runchey added, “After I graduated from CMU in 1972, I wanted to pursue a goal to become a professional umpire. I attended the Al Somers Pro Umpire Schools at the time. After six weeks of intense umpiring training he finished third in a class of 125 and returned home to await a call to join the Minor Leagues.” He spent three years of traveling in the minors, first in the New York-Penn League-1973. Next was the Midwest League in 1974 and in 1975 he made it to the Southern League.

Runchey then exploded with a hearty laugh, “On October 4, 1975, I married the best call of my life, Janie Eustice from Northwest Detroit. We are blessed with great three sons, Scott, Mark and Kurt. They all are a compliment to the Plymouth-Canton community,” said the proud father.

Runchey worked at Detroit Diesel for 30 years in the purchasing department for the Series 60-Engine Program and umpired college games on the weekends. The life style included so much travel as he would do 50-60 games a season.

“I did not return to the Minors in 1976 but still wanted to umpire. I worked the sandlots in Dearborn and hooked up with the umpire crew of Doug Cossey and Tom Ravashire to work college games. We would travel as a crew. Dick Zivic, Ron Graham, Rich Fetchiet and I started a four man crew later on. I got to meet a lot of coaches, added Runchey.”

Dave Keilitz then the baseball coach at Central Michigan networked him to pursue games with the NCAA. Said Keilitz, “As a coach you always felt good when you saw Runchey walk into the park as one of the umpires. You knew you were going to get a good umpiring job. I was thrilled when Dick made it to the CWS. He was deserving of that honor and certainly upheld his excellent reputation by calling outstanding games in Omaha.”

Runchey called the NCAA College World Series in Omaha, Nebraska five times at the famous Rosenblatt Stadium starting in 1982. He also umpired the 1992 Olympics in Barcelona, Spain. “I missed a strike on Omar Linares of Cuba, my clicker got stuck, I called him out on two strikes,” added Runchey. “Fidel Castro was in the stadium, the Cuban bench got all over me, I am glad I did not understand Spanish. Besides the temperature being hot, the Cubans were hot. I turned to the Cuban dugout and said, ‘I am just practicing, and it broke them up laughing.'” “Lucky for me, they went on to win the gold medal,” Runchey said smiling.

“We would work every big game in the Big Ten and Mid-American Conference. This was my start in college and International umpiring. I did every MSU vs. U. of M. series from 1976-1998,” Runchey continued. “I learned a lot from Grover Carr, Ed Chrzan and Bob Moyer on the Detroit sandlots. “Whitey Bartsch was a classic in Dearborn with his white buck-skin baseball shoes. They were all diplomats on the field.”

Bob Wanamaker an elite first baseman who knew Runchey from playing at Central Michigan said, “Runchey could handle an important game, he had the strong personality to control a game behind the plate.” The Hon. Edward Plawecki a former 20th District Court Judge of Michigan reiterated another compliment, “When we saw Dick Runchey behind the plate in those Dearborn Class ‘A’ games we knew we would get an effort. He called a good game and didn’t loaf.”

Another supporter was Ron Oestrike at Eastern Michigan University. “Oak was tough but always treated the umpires with dignity and respect if you did the job,” said Runchey. “He made that program a national power-house.”

I had a lot of fun with Jim Abbott when he pitched for Michigan. Runchey reflected, “He was a very classy performer. He always had some lefty jokes for me.”

“I ended my umpiring career on the field in 1998 at the CWS and National Championship game. USC beat Arizona State 21-14. It took 4 hours 2 minutes. I knew it was time to hang up the gear for good. USC stole home in the 7th to go up by a run and the runner beat the tag by inches and I called the pitch a ball and called the runner safe. My last big call ever and I always wanted to end my career getting that call right. That is what they remember about umpires or officials. You are only as good as your last call, added the always smiling Runchey.”

Runchey did make it to the big leagues as he umpired nine MLB games as a substitute at Tiger Stadium. He now is in demand for clinics. Runchey who has recently lost 20 pounds has been active with Mark Letendre of MLB on a new athletic approach in umpiring. Letendre has developed a comprehensive health care program for umpires to concentrate on staying in shape. “The off-season is just as important for officials as it is for players,” said Runchey. “Minimal beer and a proper diet is now my watchword.”

Runchey had the occasion to meet Ernie Harwell and was encouraged by him to walk for his senior health. The retired umpire now walks two miles a day, minimum. “Ernie really empowered me to be conscience of my health,” said the retired umpire. “I walk Ann Arbor Road with my neighbor, Glen Ratkewicz and we quiz each other with baseball questions. The mornings have become quite spirited.”

Runchey closes clinics with a special presentation on how the officials are the third team on the field. “A lot of umpires don’t want to be noticed, I always say, in umpiring, always have fun, don’t get hurt, and work every game like it is the biggest game ever.”

Before the game at Comerica Park the family of former CMU baseball player Kevin Young will present a $25,000 donation to endow a scholarship in his name. Young’s family, including his widow Michelle and children Hanna and Liam, will present the baseball program with a check in an on-field ceremony prior to Wednesday’s Clash at Comerica.

The award will be given annually to a baseball player who strives to embody the following qualities: One who is competitive, fair, honest, and a leader. He will also be dedicated to the advancement of the team, committed to constant improvement, and a true team player with excellent sportsmanship. He will be well liked and respected by his teammates. He will be a motivator, who is always supportive of his teammates, and has an intense desire to win. He will be proud to be a Chippewa; confident but never arrogant, and humble, with a positive attitude. He will also be an overall positive representative of the CMU baseball program.”