What has been inevitable news has now happened; U.S. Rep. Alexandria Ocasio-Cortez’s unfavorable rating has reached a peak after just a few months in Congress. A new poll shows the 29-year-old former bartender’s popularity fading fast.

Ocasio-Cortez rocketed to fame a year ago as the Democratic Party shifted to the far-left. With each passing day of her short-lived fame, her embracement of socialist policies such as the Green New Deal alienated her from the true base of the party.

Aide from starry-eyed young people among whom many have never paid taxes, raised a family or even held down a job, Ocasio-Cortez is still their vaulted leader. But a Gallup poll released Friday shows that Ocasio-Cortez’s unfavorable rating has risen by 15 points since last September.

That’s an increase from 26 percent to 41 percent of the American adults polled. It should be noted that she has increased her favorability rating, but only by 7 points. 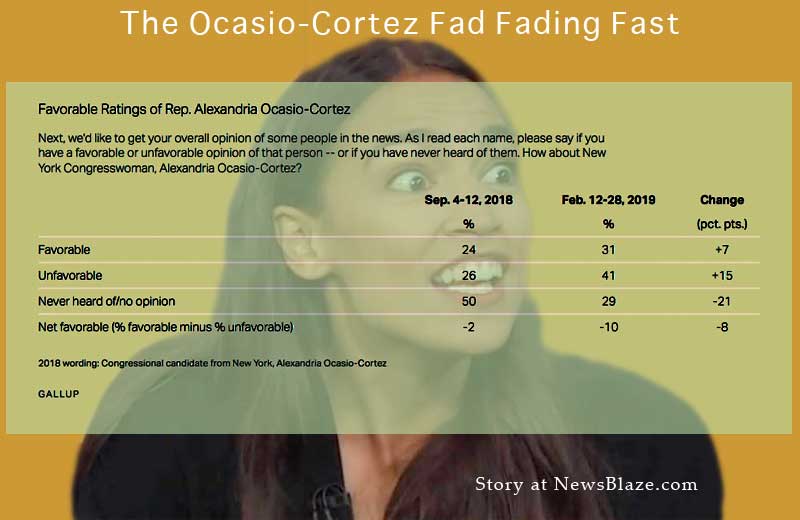 Lastly, 31 percent of surveyed people view her favorably, compared to 24 percent in September. Alexandria’s day has passed. It should be kept in mind that in the latest survey only a fifth of people say they aren’t familiar with the self-described Democratic socialist.

Her name recognition is growing compared to the other politicians at the same point in their careers in Congress. But that isn’t necessarily good news for her. It seems the more the people get to know this woman, the less likely they are to agree with her.

Ocasio-Cortez is a polarizing figure. The problem is she is strongest among the young who are the least likely to vote. Most of her opposition is composed of Republicans and more conservative Democrat-leaning groups. They constitute a far larger audience.

Thus, 75 percent of Republican respondents view her negatively. Only five percent have a positive view. Worse yet, among her own Democrats, 56 percent of respondents had a favorable view of Ocasio-Cortez, compared to only 15 percent of the Democrats polled who don’t support her.

Amongst the independents. The Gallup Poll shows she has a negative net rating of 5 percent.