WASHINGTON — (Newsblaze) Monty Hall, the famous American game show host, would always pose a question to his contestants: Is it door number #1, door #2, or door #3? People in Washington seem to be typecasting the thirty year old globetrotting National Security Agency Whistleblower, Edward Snowden, into two categories. Some cast him as a Hero – shining a light on government abuses of the fourth Amendment. Others cast him as a traitor, resembling the likes of Julius and Ethel Rosenberg. It may be time to look at the door #3 scenario: Snowden may be the modern day “Herb” from Burger King’s advertising department. Nothing more than an act.

First a little background. In the mid-1980s, as Burger King was competing with McDonalds, they wanted to promote the idea that their product, the Whopper, had been consumed by every American. Their plan was to introduce a nerdy looking actor named “Herb” as the only American who had supposedly never ordered their flagship product. Herb was kept a secret for a bit, but then he went on a “Where’s Herb” tour. If someone recognized him at a restaurant, they would win a prize of $5,000.

So, just as the NSA can’t find Snowden now, no one could find Herb then, because initially no one knew what he looked like. The home of the Whopper soon retired Herb back to Wisconsin as a flop. Edward Snowden may be putting on the same kind of act that Herb did hawking hamburgers – except that in the spy business, deception is reality. You have to ask that question first even as the world engages in a “Tastes Great, Less Filling” Miller Light style debate. 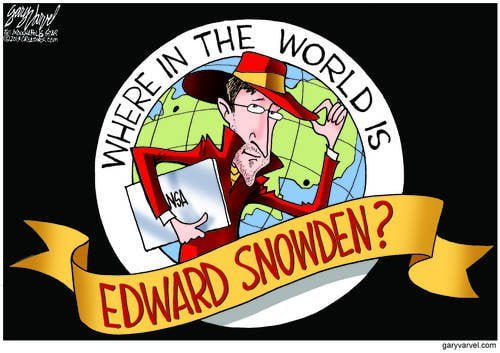 The Doctor of Democracy, Rush Limbaugh, had the following to say on Tuesday about Edward Snowden on his radio show: “I have a little prediction to make for you. It’s June 25th. If and when amnesty is rammed through Congress and signed into law, the news media will go back to not caring one whit about Edward Snowden or any of Obama’s other scandals.”

The Russians are probably not waiting for the immigration bill. Apparently, the Russian government initially granted passage to Snowden. Then they couldn’t find the guy, telling the world he was on a flight to Havana. The Press booked seats on the plane, but he wasn’t on it. When Snowden did finally show up at Sheremetyevo Airport, the Russians did get to give Washington the finger diplomatically, by not making him to go back, but they also didn’t allow him any further.

The Associated Press reported that: “Putin said Snowden is in the transit zone of Sheremetyevo Airport and has not passed through Russian immigration, meaning he technically is not in Russia and thus is free to travel wherever he wants.” Reuters soon posted a headline saying that Russia hoped to repair relations with the US and meanwhile they wanted him to make his connection quickly. If it is the case that they wanted to “speed the parting guest,” maybe there was nothing of value that the KGB could get with Snowden, maybe less than what Burger King customers received from Herb years ago.

Aside from the diplomatic actions that make this look possibly less than what it seems, the Judicial actions also look suspect. Obama seems to be taking a page out of his post-Bengahzi Playbook. After the talking points bombed, because a mysterious video that nobody had ever seen was blamed, before we knew it, a hooded man was taken into custody for parole violations. Now, a sealed criminal complaint that the world is unable to see makes the mind run wild into Shakespeare:

“All the world’s a stage,

And all the men and women merely players:

They have their exits and their entrances.”

Casa Blanca’s actions in this matter also work to make Snowden worthy of a raspberry. It is strange Obama is not able to remain aloof and campaign against the agency whose Whistleblower shows up right during a momentous Sino-American summit and they are unable to plot his location after an hour and a half online chat. The very thing Snowden says our government knows everything about doing. To date, Obama has remained silent on the NSA spying that caused his 17 point drop in the recent CNN poll amongst Blacks. Is it possible Obama can’t campaign against the NSA lest the intelligence community turns on him, similar to what happened after David Petraeus was quoted in a Joseph Curl Washington Times column, saying everything about Benghazi would be known by “COB Friday.” Some wags have said Obama was willing allow a drop in his approval rating because of this.

As the days wind into the hot summer in Washington, it is likely stories on the PRISM program will be more than a beach read in Ocean City. There will be concerns about our future and how encroaching it will be, on our digital lives. Is Snowden a spy who works in the world of deception, or the nerdy Herb, and is he diverting us from something? Anyone who cares about the Fourth Amendment may consider dropping Edward Snowden as their advocate, in much the same way as Burger King dropped its ad agency after Herb flopped.