A more ominous quote has yet to be made concerning a possible woman in the White House. At a birthday party for Hillary Clinton last October, Sen. Dianne Feinstein (D-Calif.) delivered a toast that included, “If Hillary couldn’t win the White House, I don’t know which woman can.”

Those words resonate throughout the Democratic Party as they gear up to face their hated enemy, President Donald J. Trump, in 2020. Is there truly a viable female candidate to take on that task? For that matter, is there anyone presently on the Democratic bench who can defeat Trump in three years?

Some of the Democratic party’s strongest potential candidates are considered to be women. They include rookie California Sen. Kamala Harris, Massachusetts Sen. Elizabeth Warren and New York Sen. Kirsten Gillibrand.

Should those names strike terror in Republicans? All three are considered to be part of the far left movement of their party. That consists of approximately 20 percent of the American electorate. But, woman or no woman, that is not an overwhelming percentage for any opponent to face.

The liberals’ latest fashionable movement is now the #MeToo cause. Brought on mainly due to liberal men attacking and harassing women, like Hollywood liberal Harvey Weinstein, it is the “in place” to be these days for the hysterical far left. Naming a white man as their party’s presidential nominee would not be this week’s flavor and simply “not inclusive.” 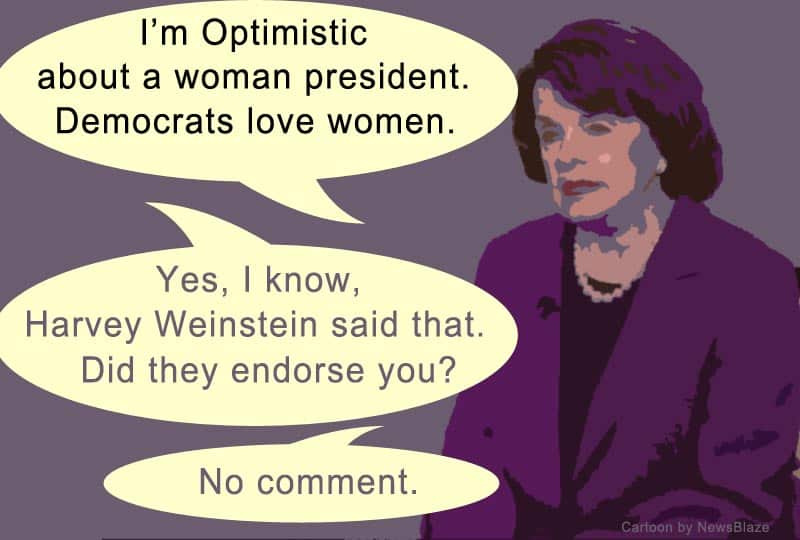 Hopefully during these lib pow-wows they do not forget Trump’s own surprise run to the 2016 GOP presidential nomination shows the foolishness of political predictions. You never know, maybe 85-year-old Diane Feinstein or 77-year-old Nancy Pelosi will corner the blue hair vote and fool all the youngsters.

Some Democrats also say it makes little sense to nominate a woman as the party’s candidate just on the basis of gender. Those sane voices are far outnumbered by the George Soros-funded hordes dedicated to 24/7 news cycles.

One would think common sense would drive the Democrats to select a candidate who is tough, authentic and credible regardless of gender. Nah, that won’t happen with this bunch. Losing the House, Senate and presidency in eight short years was a fluke.

Feinstein’s comment may be chiseled into Democratic lore before the extreme left destroys any semblance of a united party. They may find that Joy Behar’s hateful view that a woman has no chance of any good jobs is as ridiculous today as the buggy whip in 1900.

As the lynching party of the left forms in states like far left sanctuaries New York and California, a little bird needs to sit on their shoulder and whisper an important fact. Their former now bitter and angry goddess, Hillary Clinton, may have hurt their “progressive” cause in “intolerable” states such as Michigan, Wisconsin and Pennsylvania, which voted for a Republican in 2016 for the first time in decades.

Oh never mind. That is unimportant to the dim bulbs leading the latest 24/7 issue-driven assault. The trouble is, like General Custer found out, there is extreme opposition to their world in a bubble.

Feinstein says she is optimistic about a woman as president. Of course this is the same longtime California Democrat who couldn’t even obtain the endorsement of her party for a fifth term as their candidate. The California left doesn’t think she’s “progressive” enough on illegal aliens and higher taxes.

One thing is certain for the party in another world other than this one; their chosen candidate will fit the bill for the wacky left. That will include solid credentials with tolerance, inclusion, compassion and the ability to avoid hurtful comments to anyone, anywhere.