It seems that Republicans such as Paul Ryan from Wisconsin want you to believe that the current health reform package will not contain costs. Ryan even suggests that the savings are just an accounting trick.

Ryan in my opinion made some valid arguments about cost containment, when I read and then saw his proposal at the Health Summit.

After further research let me show you where he went wrong. Illustrated by people much smarter then me on the subject.

Remember, the Senate bill is going to cover 30 million more people. That of course means costs are going to go up in the short run.

Jon Cohn of the New Republic explains the bending of the cost curve.

The underlying trend is in the right direction. As more time passes, it’s more likely we’ll save money. Why do I say that? It has to do with two competing trends that explain how the Medicare Actuary arrives at its bottom line [i.e., more people being covered drives spending up, but increased efficiencies drive spending down -ed.]

….According to the projection, under reform the government will reduce its spending on Medicare significantly. Establishing a commission on the cost of Medicare will reduce it further, although not by much in the early years. And a tax on the most expensive health insurance plans will curb spending in the private sector. 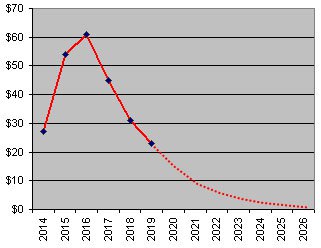 ….But the actual price may be even lower, at least as time goes forward. The Medicare Actuary does not project beyond the 2019 window. But it’s reasonable to assume that if the trend holds until 2019, it will hold for a few years beyond, to the point where medical care spending really would come down.

Cohn does a good job showing the long term benefits health reform will have on the deficit and in turn the economy.

With that said, Ryan argues that Health Reform would not only raise the deficit, but increase the cost of health care.

But let’s begin at the beginning. Ryan says that “the true 10-year cost of this bill in 10 years” is $2.3 trillion. On this, Ryan is right, but misleading. In Ryan’s favor, Democrats have artificially lowered the cost of the bill by pushing its start date back to 2014, even as its 10-year budget window begins in 2010. The 10-year cost of the bill is really only counting six years of operation. This was a deceptive effort to keep the bill’s price tag under $1 trillion, even as the bill’s price tag was really quite a bit more. Point for Ryan.

Ryan gets the $2.3 trillion by looking at what health-care reform will spend in 2019 and extrapolating that number out across the next 10 years. I’ll trust that he did the calculation correctly. The problem is that Ryan uses the classic “This Is A Big Number” technique to imply that the bill is financially irresponsible,

Big number techniques and crying about the length in pages of the bill borderlines on madness. Of course the bill is going to be large, and of course it will cost more, because it covers 30 million more Americans. But look what we have now, health care is currently 8% of GDP, with that number growing to 18% of GDP at today’s growth in 10 years. Our current system doesn’t work.

But what people such as Ryan conveniently leave out is the long term savings involved, as Cohn illustrates and Klien goes on to explain.

According to the Congressional Budget Office, the bill cuts the deficit far faster in the second decade than in the first. That’s because the revenues and savings grow much faster than the spending. The bill might cost $2.3 trillion, but it either raises or saves $2.95 trillion, for a net deficit impact of negative $650 billion. So although Ryan uses the price tag to imply that the bill’s spending is somehow worse in the second decade than in the first decade, he omits the information that’s actually relevant for his presentation on cost control and deficit reduction.

I imagine the congressman would respond to my previous point by saying that he doesn’t buy the CBO’s estimates.

Social Security and Medicare both have trust funds which are supposed to store money to pay for the program’s future costs. If a new policy saves Social Security $50, and the government then doesn’t have to borrow $50 that it would otherwise have had to borrow to pay for Social Security, that improves the deficit outlook by $50. With me so far?

But let’s say that the government then takes that $50 from the trust fund and sends it over to an education program. From the perspective of what’s called the “unified government budget” – which is the budget we use – there’s no difference because the government is not borrowing any more money. To use an example Peter Orszag favors, from an accounting perspective, this is the same as a parent giving his son $50. The parent may be $50 poorer, but the family’s finances are unchanged.

That trust fund, however, has to eventually be paid back. If you don’t leave the money in the trust fund, then you have to assume that other programs will be cut later when the trust fund’s debts come due. You have to assume, in effect, that you’ll take the money back from your son, or from another part of the family budget. Otherwise, you’re double-counting the cash, because you’re assuming that it lowered potential borrowing for Social Security (count one) and for the education program (count two).

According to Ryan, there’s about $124 billion in double-counted money in the bill. Assuming his math is correct (and no one I talked to said it wasn’t), that’s a fair critique. What isn’t fair is to suggest that this is about the health-care bill. This is how the government does its accounting

So lets take a moment and extrapolate what Ryan, and Klien, have said. The CBO says Health Reform will save in the second 10 years, 650 billion dollars off the deficit. Ryan suggests the governments accounting practices which have been used for decades now is hiding approximately 124 billion due to double accounting. That is still a half of trillion dollars saved toward the budget in the second ten years. Even if Ryan had it his way, which is not how the government keeps its books. But if they did, 526 billion in savings and 30 million more people covered. This is with consumers not being able to be dropped for any reason, no pre-existing conditions, no caps on coverage, which will almost stop medical bankruptcy’s. The bill may be complicated, and cost a lot, but those are benefits the Health Care system could never provide under the status quo.

To sum up, then, Ryan makes some good points about the true cost of the bill and realities of the federal budget. But he purposefully omits any mention of the bill’s expected savings, disingenuously attaches the price tag of a broken Republican policy onto the health-care reform bill, and selectively stops extrapolating trends when they don’t fit his points. It’s a presentation designed to make the bill look less fiscally responsible than it really is.

But don’t listen to me. Robert Reischauer is the head of the Urban Institute. He’s also one of the CBO’s most revered former directors, in no small part because his relentlessly honest cost estimates helped doom Bill Clinton’s bill in 1994. I reached him earlier today and asked whether he thought this bill made fiscal sense. “Were I in Congress and asked to vote on this,” he replied, “I’d vote in favor.” The bill isn’t perfect, he continued, “but it at least has the prospect for creating a platform over which more significant and far-reaching cost containment can be enacted.”

The same cannot be said for the status quo

Ezra Klien writes for the Washington Post, and is an expert on Health Reform, as is Jon Cohn from the New Republic. I change diapers for a living, but believe there are 30 million reasons why Health Reform should be passed.