Bobby Saadian was elected President of the Top 40 Under 40 professional organization by The National Trial Lawyers in 2017. Membership is by invitation only for trial lawyers practicing civil plaintiff and/or criminal defense law. Saadian has been ranked on it for two years in a row for his work in civil plaintiff law in the Los Angeles area.

Selection for membership is based on a rigid process that comprises of third-party research, peer nomination, and objective progression. To be nominated, an attorney must be under the age of forty and have proven trial results with outstanding qualifications. A lawyer must also comply with standards set by the state bar as well as national Rule 4-7. 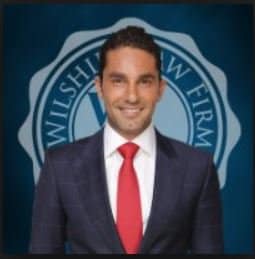 Bobby Saadian, who holds a JD/MBA from Pepperdine University in Trial Preparation and Settlement, was also designated for the Top 100 list as a Civil Plaintiff by The National Trial Lawyers. The alumnus of California State University, Northridge is reputed and acknowledged to be an ethical lawyer who holds influence and stature in public.

A personal injury expert, Saadian has been a member of Super Lawyers for six years. Only attorneys who clear Super Lawyers patented multiphase selection process are chosen for this honor. As one of the few attorneys to be a Super Lawyer at such a young age, he was slotted in the Up-and-Coming 100 list in 2016 and 2017 as a Southern California Rising Star.

Bobby Saadian, founder of Wilshire Law Firm, is a member of Rue Ratings’ Best Attorneys of America. Saadian, who recently filed a class action against Smartphone giant, Apple Inc., has been awarded a Litigator Award in 2014 and 2015. Only trial attorneys who have won million-dollar cases are allowed in the fraternity. More than one million lawyers are considered by the Trial Lawyers Board of Regents™ for the accomplishment, and 99% of these are rejected.

Bobby Saadian is, indeed, a Super Lawyer under 40.