Crop circles are patterns created by the flattening of crops (although at least one has been found in Russia using snow and ice); the term was first used by researcher Colin Andrews to describe simple circles he was researching.

However, since the early 90’s the circles have evolved into complex geometries, but the term “circle” is still applied when describing these unusual patterns.

Many explanations have been offered on how these circles appear, including the formation by UFOs. However, most of these are believed to be man-made. A study into circle hoaxing (2000) concluded that 80 percent of UK circles were definitely man-made, but this percentage may have increased since that report was published.

Whilst some of the crop circles seen may be the work of UFOs or some other paranormal phenomena, it is quite possible their existence was inspired by earlier reports of UFO landings. 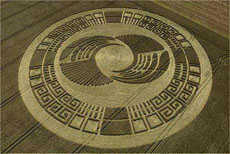 Once such report involved a sugar cane farmer in Tully, Queensland, Australia, who claimed to have witnessed a saucer-shaped craft rise 30 or 40 feet up from a swamp and then fly away. On investigating the location later he discovered the reeds intricately weaved in a clockwise fashion on top of the water (strong enough to hold the weight of 10 men).

Although crop circles became far more complicated in their design after the 90’s, they first started to attract attention in the late 1970’s, appearing all over England. Since this time more than 10,000 circles have been discovered all over the world.

The following extract (from Wikipedia) mentions how Doug Bower and Dave Chorley created a hoax circle in 1976:

“In 1991, two men from Southampton, England announced that they had conceived the idea as a prank at a pub near Winchester, Hampshire during an evening in 1976. Inspired by the 1966 Tully Saucer Nests, Doug Bower and Dave Chorley made their crop circles using planks, rope, hats and wire as their only tools: using a four-foot-long plank attached to a rope, they easily created circles eight feet in diameter. The two men were able to make a 40-foot (12 m) circle in 15 minutes.

The pair became frustrated when their work did not receive significant publicity, so in 1981 they created a circle in Matterley Bowl, a natural amphitheatre just outside Winchester, Hampshire – an area surrounded by roads from which a clear view of the field is available to drivers passing by. Their designs were at first simple circles. When newspapers claimed that the circles could easily be explained by natural phenomena, Bower and Chorley made more complex patterns. A simple wire with a loop, hanging down from a cap – the loop positioned over one eye – could be used to focus on a landmark to aid in the creation of straight lines. Later designs of crop circles became increasingly complicated.

Bower’s wife had become suspicious of him, noticing high levels of mileage in their car. Eventually, fearing that his wife suspected him of adultery, Bower confessed to her and subsequently he and Chorley informed a British national newspaper. Chorley died in 1996, and Doug Bower has made crop circles as recently as 2004. Bower has said that, had it not been for his wife’s suspicions, he would have taken the secret to his deathbed, never revealing that it was a hoax”

Unfortunately, many readings taken at crop circle sites are also possible to recreate and it is difficult to know whether any of the crop circles found are real, at least those with more complicated designs.

However, marks left by UFOs “landing” are a different matter and are usually too simple to attract any interest in the media (which in my opinion gives them more credibility), much like the Australian report mentioned earlier.

The subject of Crop Circles has recently arisen in a claim made by a Bulgarian Scientist, who says Aliens “already exist on Earth.”

Oddly enough, a comment made by Lachezar Filipov, deputy director of the Space Research Institute of the Bulgarian Academy of Sciences, was that “humans were not going to be able to establish contact with the extraterrestrials through radio waves but through the power of thought”

Some weeks ago I received an email from a person (who did not wish to be identified) also claiming that Aliens were already here, but taking control of people’s minds.

The “informant” chose to provide this information on a weekly basis (not sure why), and whilst the details seem fantastic, there was something about his story (I am assuming it is a “He”) that appeared genuine.

Apparently, this person works for “a government agency involved in technology research with military connections.” No location was given, but a search revealed the first email came from an area near Arlington, Virginia.

I have received three emails, but these stopped suddenly. The person was clearly worried about the risks involved, and said, .” ..but feel I must tell someone about the information I have.”

In his email, he claimed that a number of people at the agency had apparently been taken over by Aliens, and that many unusual promotions had taken place (to replace lost staff). He wrote “The thing that attracted my interest and concern was the sudden deaths of five senior members of staff within just three months. We were told that these were as a result of accidents, health problems and one suicide.”

It has been almost three weeks since I received the last email (which is just signed “D”) and the person sounded quite desperate in the last communication. He mentioned meeting a colleague who also had information on the Aliens, but this person died from a “Heart Attack” just a few hours after they met.

He expressed a desire to provide more proof but ended by saying “I must think about this some more, I just don’t know what to do yet.”

I shall wait a little longer, to see if I receive any further emails, before revealing more of his story. I have tried to contact the “informant,” but he made it clear from the beginning that he would not respond to any replies.

Apparently, he chose to share this information with me because he found me “to be a person who not only takes this subject seriously, but is prepared to look at all aspects in a constructive manner.” As he pointed out, I often receive information of this kind (which is true), but I like to keep an open mind on almost any topic.

The article on Crop Circles was an extract from my book “The Unexplained Explored” which looks into the mysteries of Future Dreams, Ghosts, ESP, Life after Death, UFOs and Aliens, Chemtrails, Planet X, Remote Viewing, Reverse Speech, The Roswell UFO incident, Dowsing, The Occult, Time Travel and much more.