La MaMa E.T.C. and Yara Arts Group will present “Still the River Flows: Winter Rituals from the Carpathian Mountains,” a multi-layered event featuring traditional winter song singers and musicians from the Carpathian Mountains of Eastern Europe. Sections of a nativity puppet play from the 18th century with traditional music arranged by Julian Kytasty will be performed, as well as solstice songs from other countries sung by Svitanya, an Eastern European Women’s Vocal Ensemble. The event will take place December 26-28, 2008 at La MaMa Experimental Theatre in New York’s East Village. “Still the River Flows” is directed by Virlana Tkacz and designed by Watoku Ueno.

Yara Arts Group of New York has invited traditional winter song singers from the village of Kryvorivnia in the Carpathians, who will be joined by the Tafiychuk family of musicians to sing the Koliada. The Koliada songs are part of a winter ritual that now coincides with Christmas, but is much older in its origin, traditions and symbolism. The songs are incantations that assume the magical power of words: what is said will be so. 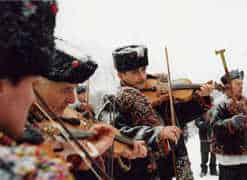 The production begins with an introduction into the winter rituals, and features Ivan Zelenchuk, the leader of the koliadnyky from the mystical Carpathian Mountains, singing with his brother Peter and son Mykola, who play the trembita, the traditional twelve-foot long mountain horns. They will be accompanied by Mykhailo Tafiychuk, a virtuoso traditional fiddler from the next village, as well as a master player of the volynka, bag pipes made of goat skin and his son Dmytro. The songs are incantations that assume the magical power of words: “what is said – will be.” For more details on the Koliada ritual and the event, please visit Yara’s website, www.brama.com/yara/koliada-08.html

Svitanya is a women’s vocal ensemble that sings a wide range of traditional folk music from across Eastern Europe, in the original languages. At La MaMa, they will sing winter songs from Ukraine, Bulgaria, Croatia and Latvia. Based in Philadelphia, Svitanya – whose name means “the light at sunrise” – has performed throughout the east coast and is part of Pennsylvania Performing Arts on Tour. The group’s CD, “First Light,” was called “angelic” and a “rare jewel” and has been played by radio stations in more than a dozen countries. (www.svitanya.org)

For two years, Yara artists documented the Koliada as it exists in the village of Kryvorivnia in the Carpathian Mountains of southwestern Ukraine. Photographs by Alexander Khantaev and videos by Andrea Odezynska from these research trips will be exhibited.

Yara Arts Group is a resident company at the internationally acclaimed La MaMa Experimental Theatre in New York. Founded in 1990, Yara Arts Group creates original pieces that explore timely issues rooted in the East through the diverse cultural perspectives of the group’s members. Yara artists are of Asian, African, Eastern and Western European ethnic origin. They bring together poetry, song, historical materials and scientific texts, primarily from the East, to form what one critic described as “extended meditation on an idea.” The company has created eight pieces based on materials from Eastern Europe including: “A Light from the East,” “Blind Sight,” “Yara’s Forest Song,” and “Swan.” The New York Times (D.J.R. Bruckner) called one of these pieces, “Waterfall/Reflections” developed with folk singer Nina Matvienko, “a theatrical enchantment given cohesion by choreographed movement and by music on a prodigal scale.” Since 1996 Yara has also created seven theater pieces with Buryat artists from Siberia. The Village Voice (Eva Yaa Asantewaa) called “Circle,” a World Music-Theater work with artists from the Buryat Republic at La MaMa in the spring of 2000, “a stunningly beautiful work (that) rushes at your senses, makes your heart pound, and shakes your feelings loose.” Yara has also created theatre pieces on Japanese material. Last year, it created the first Kyrgyz-American collaborative project, “Janyl,” about a woman warrior from the Celestial Mountains.

The exhibition will continue on Sunday from noon to 4:00 pm and a second workshop may be held.

“Winter Sun: A Festival of New Arts and Tradition” will be presented December 19 to 21, 2008 by Yara Arts Group at Ukrainian Institute of America, 2 East 79th Street, Manhattan. Tickets are $15 Friday, $25 Saturday and $30 both days. For more Information and reservations call (212)475-6474. Yara Arts Group’s website is brama.com.