NewsBlaze News
Home Entertainment Music Skylarking is a Rare Gem and a High Mark for XTC!

Skylarking is a Paisley Underground Masterpiece That is Perched in The Pantheon of Great English Albums and Furthermore, Played a Role in The Creation of a Mostly Forgotten Comedy/parody Band From Dallas, Texas: The Potatoes!

Rediscovering XTC’s Skylarking after twenty-three years is indeed a pleasant prize. I had recently read Bucks Burnett’s (a former proprietor of Fourteen Records and present day owner & General Manager of Earotica) piece “My 10 Favorite English Albums Ever”; he had sung its praises as “ridiculously melodic and irritatingly good.” I concur with his positive accolades. A “Sentimental Journey” was unleashed after this reading. The mnemonic runs something like this: during one particularly crisp fall evening sometime in 1986 I ran into a friend at the now defunct Peaches Records in Dallas, Texas. Hubert Winnubst, a guy I had worked with before in a band named Rachel Bazooka, had in his hands a gigantic stack of LPs ripe for purchase. Skylarking was intermingled amongst this stack.

“Hey Hubert, do you want to get together and jam sometime next week?,” I blurted forth with a wavering throat. “Why not,” Hubert retorted. We did just that, and over a few near-beers we jammed freely on guitars and Hubert played that lovely record several times over. We whipped up enough inspiration to start up another band, and we did just that. Later, after many of the members were assembled, each with their own distinguished musical assignments in place, we called ourselves The Potatoes (1987-1991). It’s difficult to put a moniker on this band, but it approximated a Comedy/Parody band, a Dinner Theater revival group that danced around many genres and made a sizeable splash on the local scene, mostly in the Fair Park District of Dallas. So Skylarking does have a permanent parking place in my heart; thus I hungrily snatched it up at Waterloo Records last Saturday, and have been listening ever since.

It’s produced by Todd Rundgren and he was hired to make a record that could result in some kind of commercial success. Todd’s sequencing of the songs is nothin’ short of brilliant, one song syncs into another seamlessly and mellifluously. He also decided which songs were used from the demos that he received from XTC. Rows between Andy and Todd were rumored widely, but later Partridge recognized the gifted hand of Rundgren, that delivered the goodies, indeed a very beautiful product. The genre is psychedelic pop; the lyrics remain abstract and the music stays tuneful and inventive. It is, roughly speaking, a ‘concept album.’ Let me shed a few impressions of this sonic kaleidoscope for you. Let’s see here…

I am interpreting “Summer’s Cauldron” as Andy Partidge’s coded statement on his dire addiction to pills. “Please don’t heed my shout I’m relax in the undertow.” I could be wrong. “Grass” is my favorite song, a pastoral spoof written by Colin Moulding, a clever play on words, a blatant double entendre where turf and pot are interchangeable, and vice versa. Huh? “Over and over we flatten the clover.” Is this a zany scene from Green Acres? “Shocked me too the things we use to do on grass.” Like what? Play croquet such as Alice In Wonderland? Fight off fire ants at a bummer-of-a Sunday School picnic? Should I marvel at Astro-Turf newly revealed at the Astrodome in the mid-sixties? Let yourself take a tumble in the hay as this lilting melody sends you away to Day Camp. Clean-cut lawn or up-in-smoke, it’s green either way! 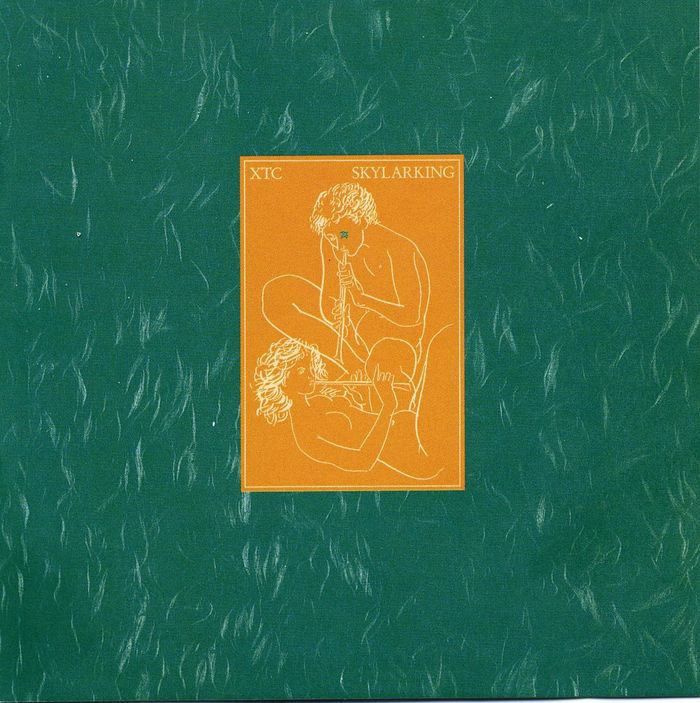 You will find yourself humming “The Meeting Place” in the shower or on a work break in some hefty-foreclosed-building in the middle of nowhere. Moulding’s melodies are contagious! “That Really Super, Supergirl” is comic book song that combines a catchy tune with upbeat lyrics that may be partially biographical for Partridge, but things remain metaphorical to the umpteenth degree. “Ballet For A Rainy Day” is a psychedelic tune and reminds us of the Paisley Underground phase in the mid-1980s, that XTC partially fits in with. Think of bands like Green On Red, The Dream Syndicate, and Jesus & Mary Chain as examples of this interlude in pop music. “Silent film of miracle play” is a most pleasing line for me in terms of palpable poetry. ‘Twas a refreshing blast of Nouveau-Flower-Power for that time in the mid 1980s.

“Another Satellite” is a catchy outer-space type theme, where people orbit around each other like planets around the sun, or otherwise around each other. “Don’t need another satellite” with treated guitars and synthesizer is out there and seems to be a plea for your own free space. “Mermaid Smiled” was cut from the LP to make room for “Dear God.” It was put back on when Skylarking was remastered in the 2000 reissue. Mermaid is an enchanting nautical nursery rhyme that chimers and chimes ryely.

Two late appearing tunes by Colin Moulding are pleasantly plump partridges resting sweetly side by side. “Dying” is a melancholic reflection on the death of an unidentified acquaintance, “the day you dropped in the shopping line.” Moulding does not want to die like his unfortunate colleague? An enviable goal for sure! “Sacrificial Bonfire” is puzzling? It reminds me of a Medieval, quasi-Provencal yarn; Colin delivers the vocal in a knavish nasal phrasing, as if he were a servant/clown/bard at some fictitious royal court of yesteryear. He sings it almost soprano, happy, like some kind of comic puppetry, yet the lyric is dark and foggy. The theme is change, which can only be gained painfully. “Burn up the old. Ring in the new.” Savonarola burning at the stake in a Florentine square? The tragic bonfire at Texas A & M? Two odd parallels, yet not transparently logical, that rang the doorbell of my mind as I listened.

The thought-provoking track “Dear God” was initially just a B-side to the single, “Grass,” but was added to the U.S. album. It helped boost the sales of the record, and you can easily see why. It starts out with an acoustic guitar and a child singer asking if God got his letter. On the second verse Andy Partridge pipes in with: “Dear God, sorry to disturb you, but…I feel I should be heard loud and clear.” The tone gets more passionate and angry as the song progresses. Basically, Partridge is voicing skepticism and anger towards God. If God made Man in his own image, then why is Man hungry and suffering and all? So the argument might go, why is Man not all perfect and happy like the Buddha-Head God? This doesn’t make sense? Andy is making a valid point, and in concurrence with some of our modern-day pundits of theology, who have gone south on God themselves!

The music is delightful with Colin Moulding’s thumpy bass, Andy’s jangling guitar, and the middle lead section with Dave Gregory’s synthesizer ching-a-linging like a toy instrument orchestra. The finale C section is a choppy staccato and oozing umbrage. “I won’t believe in heaven and hell. No saints, no sinners, no devil as well. No pearly gates, no thorny crown. You’re always letting us humans down. The wars you bring, the babes you drown.” God comes off as a bad guy in this song! Bohemians love this kind of Existential banter…echoes of John Lennon’s “God,” “I don’t believe in Jesus.” And the child singer has a touch of Pink Floyd’s “Another Brick In The Wall, part II.” Profound also is that in the B section, Partridge says that man made God first, then God made man…this makes sense, from what little I can remember from my isolated bible studies.

I have a cloistered compartment in my heart for Skylarking, it resides in the childhood section of my heart where daydreaming in some empty cow pasture of Texas (a good part of the day) is allowed, and make-believing life just might work out is also legal.