I still remember when a friend awakened me from a dream and told me John was dead. I knew he was telling the truth, but I wished that I was merely under the spell of a mischievous Sandman. It will eventually sink in, but not just yet; maybe only my own death will awaken within me the full scope of this misfortune? I avoided these current specials that care to recall the tragedy of John’s death in terms of the movements and thoughts of his killer. To dwell on this is madness!

I’d prefer to forget that man once and for all. Instead, I’m focusing my energies on seven of John Lennon’s beautiful songs. These are intuitive calls; no particular reason can be given for their choice. So sit back and relax and let’s drift on a cozy trip down memory lane, where John is always smiling, singing and laughing, or waxing his way through the Eastern vistas of our minds. The boat departs in one minute, my friend, so jump aboard and let’s glide down gentle streams in the Sunshine of Art’s luminescent waters!

Be here now. Flow of cosmic energy races across the universe, matter collides and meteors crash into the primeval forests of ancient, primitive man. This will Blow Your Mind, but Mind Games is John’s fantastical-est achievement. An Eastern chant with the revolutionary message of Mahatma Gandhi flowing throughout. Simple Peace & Love.

Love the image of ‘millions of mind guerrillas’; evocations of Che Guevara multiplied as clones in ones’ head. And ‘the druid dudes lifting the veil’ must be some type of saviors for the 1960s generation who could free people up, those tethered by a capitalist social structure that works as an enslaving force of oppression. John’s voice is one of a Guru Messiah barking out revelations first realized by The Buddha two and a half thousand years ago.

Listen for a subtle staccato guitar, where the strings are muted and plucked, and a surging organ part that colors the martial chord progression; with a pounding crescendo every fourth beat. Sounds like Hannibal’s elephants stomping ‘cross the Italian Boot. John double tracks the vocals; gives them authority and majesty, as if Julius Caesar himself was reading off his memoirs, the conquests of Gaul, to the Roman senate.

# 9 Dream is more like the heavy Strawberry Fields’ period, more of a vision, a stream-of-consciousness, and an awareness of electric currents that pipe through our brains in the non-waking hours. “Ah! Bowakawa pousse pousse” is nonsensical chanting that is confident enough to coax us into believing that it was a rant used by Timothy Leary while tripping on LSD. I thought he got it from the Bhagavad Gita, but it was made up out of his imagination. Crazy Man! 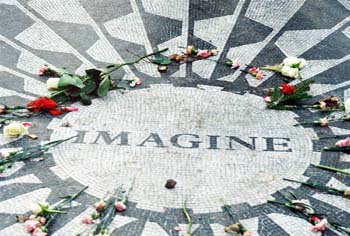 Woman has a trodden rhythmic pace to it that functions as the hook. Shimmering guitars and sparkling harmonies against Women’s Lib lyrics make this a cherished anthem of treasure that stands the test of time. But I’m stricken with a heart pang of gossamer gloom when tweaking treble, bass and separation on my Kenwood receiver.

“Woman I know you understand, the little child inside the man, please remember my life is in your hands. And woman hold me close to your heart, however distant don’t keep us apart. After all it is written in the stars, oooh well, well, oooh well, well.” John was destined to be with Yoko and he suffered from the Peter Pan syndrome, so he needed Yoko’s strength and support.

The greatest levels of sorrow and grief imaginable grip me when hearing Woman; the music is exquisite but the mood is misery. The chords cascade upwards; covering one line of poetry, then begin over again with a second line that completes the couplet. The key change on the third verse is a pleasant effect, as well as the chant like Hare Krishna ending, that is reminiscent of the consummations inherent in Hey Jude. “I love you (yeah, yeah) now and forever (repeat).Nah, Nah, Nah nah nah nah…Hey Jude.”

Beautiful Boy is a children’s nursery rhyme and is written for his five year old son Sean (1980). “Life is what happens to you while you’re busy making other plans.” One of John’s best lines. You must be in the moment or life will escape you. Ironic that this is just what happened to John. Double Fantasy was released on the 24th of October and John was gone by December 8, 1980. Gives that line further meaning; we better appreciate each precious second we’re alive on this earth.

Watching The Wheels is a confessional, an explanation or rationale for idle time. Idle time is not so bad. Everyone else is racing around and having heart attacks over nothing. From 1975-1980, after Sean was born, John pulled out of the limelight, stopped making records, and became a househusband. Heard he enjoyed baking bread. This almost spoken song offers an alternative viewpoint to the urban squalor and post WWII mayhem that must have been a daily struggle for a youthful Lennon in Liverpool.

This ‘dreaming your life away’ lifestyle was a recurring theme for John; we see it expressed in his Beatle song I’m Only Sleeping. “Everybody seems to think I’m lazy, I don’t mind I think their crazy. Running everywhere at such a speed, ’til they find there’s no need.” Maybe a meditative lifestyle is a better one. I followed this philosophy religiously in the mid-1970s when I lived in South Austin. Spent most of my time writing songs and making demos.

The piano is the main instrument on Watching The Wheels; “don’t you miss the big time boy you’re no longer on the ball,” but John had already experienced hundreds of gold records in his lifetime. And now he’s makin’ another gold record about how lazy he loves to be. Chew on the irony of that! John is slapping the face of the Protestant work ethic here; I’m glad he taught me that the repetition of rote chores is not the answer; consideration of spiritual matters should be a more important task in the daily pulse of a phenomenon we call life. A lesson learned, thanks John!

(Just Like) Starting Over is a song of renewal, a rejuvenation of the spirit of life. “Our Life together is so precious together, we have grown-we have grown. Although our love is still special, let’s take our chance and fly away somewhere alone.” The lyrics of John’s introduction says that his love with Yoko can have new life and fly off in original directions, which will make things fresh again.

John’s boat ride to Bermuda, where seas got dicey with a tumultuous storm, put in his mind the fragility of life. He wrote music passionately and with purpose while vacationing in this tropical paradise. Starting Over was the first single from Double Fantasy and made it to number one all over the world. This is more of an Elvis/Roy Orbison riff with a magical chord progression that sweeps you off your feet.

The use of echo on the vocals in reminiscent of the Sun Studio sound in Memphis. I find it to be Beatle-esque and love the way the chorus comes back in after the lead guitar part. I heard it was the last tune showed to producer Jack Douglas in the Double Fantasy rehearsals. John played it on piano, so it must have been slower initially, but apparently morphed to a rocker. Pretty Woman by Roy Orbison comes to mind when I listen.

For me, Real Love from the 1996 Anthology II is an actual new Beatles’ song, even though Paul, George and Ringo added their overdubs from John’s demo, with only piano and vocal. And to top it off it’s one of my favorite Beatles’ ditties. The question remains, what is Real Love? John asks this universal question and at the same time answers his own question. He’s in the Beatles so by definition is the real deal, he personifies Real Love. Does this sound like worship? It does, because it is Real Worship. Not all that different from Christianity, though.

So get out some old records and listen. John was a true artist and his songs will radiate his message for all time, unless the world shatters on its axis tomorrow. Don’t read too much into the 30th anniversary of his death, other than his own fame and his refusal to be imprisoned by it, allowed a freak possessed by the Devil, to take advantage of this precarious situation.

John’s own mortality is a given fact, but his inevitable immortality, by way of his gift for song, is an equally compelling, diametric fact, a refraction, a dialectical prism of divination, the ‘karmic wheel of life’ that Lennon knew so well emanates in the atmosphere, not the echo of a 38.