Nearly as contradictory and baffling as Michael Jackson himself, the post-mortem concert rehearsal collage This Is It may itself be considered in entirely opposite terms. That is, as an affectionately crafted tribute by and for his fan base and musical fan/collaborators putting together what would have been his final concert before his untimely death. And on the other hand a potentially negatively received, unduly worshipful vanity project veering between icon and oddly androgynous when not macho crotch-grabbing, surgically altered buffoon, if he had still been alive today. Though the film’s title intimates a prophetic double meaning encompassing both the chronicle of an extraordinary life, and its abrupt demise.

Returning to the limelight after a decade spent in hiding from unrelenting tabloid condemnation and ridicule related to more than well documented criminal charges and dismissals along with extreme surgical makeovers, Jackson at fifty years young still seems to possess boundless physical energy on screen. Though there’s an unavoidable eerie sense that he’s the director of this film from beyond the grave, when not appearing at times to impersonate himself mimicking romance or lust on stage, and especially during a reenactment of Thriller. While the actual director Kenny Ortega in a strange role reversal and addressing Jackson as ‘Sir,’ seems to stick around more as obedient manservant to satisfy Jackson’s every whim, when not framing his subject like a god or mythic creature. 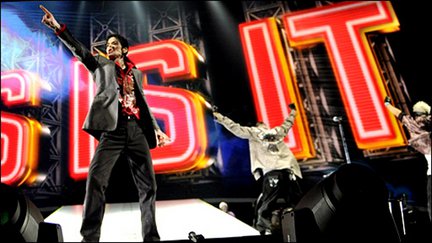 Strutting the stage beyond lean in sparkling silvers, oranges, stringy hair, sunken cheeks and shades, Jackson favors a habitual layered look, seemingly to conceal an occasionally alarming scrawny frame with bone thin limbs. And while the musical tone and choreography are often overly emphatic and repetitious, certain nostalgic moments shine through. In particular vintage replays of the young Jackson, and comical interludes as when he’s green screened into the noir classic Smooth Criminal, alongside Bogart and Hayworth.

Equal parts Dorian Gray, Ozymandias and The Emperor’s New Clothes, This Is It can’t escape an innate sense of the impossibility of transcending finite existence no matter the accolades. Whether obliviously transacting godlike with an indifferent universe the terms of one’s racial or parental identity, or living solely on one’s art rather than in the real world, as if sustained on nothing more than thin air.

As such, the film may live on long after its unfathomable subject has passed, less as entertainment than the final curtain call of a singular talent. And one who had come to be deluded into believing, encouraged in no small part by all those countless worshipful followers, in his own immortality.