Rarely does the trajectory of an actor’s life parallel that of a person he’s portraying on screen as closely as Mickey Rourke’s does in this intriguing character study highlighting how easily self-abuse can lead to lost opportunities and overwhelming regret. After a spectacular start in Hollywood back in the Eighties, the oft-troubled bad boy spent most of the next couple of decades battling the host of demons which effectively torpedoed his meteoric rise.

Consequently, while watching The Wrestler, it’s hard to ignore the similarities between the title character’s quest for redemption and Rourke’s own career comeback bid. So, one can’t help but wonder whether his recently landing an Oscar nomination for the role might be as much for this impressive tour de force as for finally getting his act together away from the camera.

In the film, he plays Randy “The Ram” Robinson, a pro wrestler well past his prime who, at the peak of his fame, had once sold out Madison Square Garden in a championship match. Now in his fifties and living in a trailer park in Elizabeth, New Jersey, Randy’s been reduced to stocking shelves at a supermarket just to pay the rent, although he still harbors a dream of somehow recapturing the magic of his glory days.

That humbling road back has him dividing his weekends between wrestling in front of small crowds in modest arenas and signing autographs for fans at memorabilia shows. Finally, a potential big payday arrives when a promoter offers to arrange a rematch against The Ayatollah (Ernest Miller), the arch-rival he hasn’t faced in twenty years. 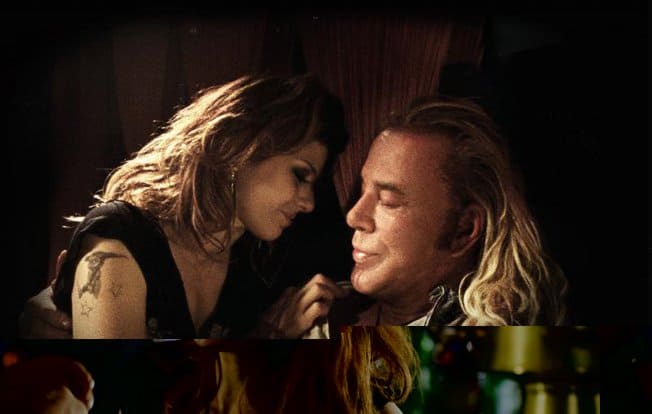 Unfortunately, the Rocky-like road to resurrection is paved not only with good intentions and a rigorous training regimen but with plenty of potential potholes, too. First, Randy’s evicted for falling behind in rent, and has to move into his car. Then, he whips himself into game shape with the help of steroids, free weights, a bleach rinse and a tanning machine, only to suffer a heart attack during a warm-up bout. After life-saving bypass surgery, the surgeon warns him that it’s time to hang up his stretchy pants for good.

Disconsolate, unemployed and homeless, the ailing fighter finds a shoulder to lean-on in Cassidy (Marisa Tomei in an Oscar-nominated performance), the proverbial stripper with a heart of gold. However, because of her club’s strict, “No contact with the customers” rule, she’s afraid to fraternize and suggests that he search for his estranged daughter (Evan Rachel Wood) since, “This kind of thing brings people together.”

But when even that attempt at reconciliation aborts, Randy bottoms out, conceding “I’m a broken down old piece of meat, and I’m alone.” With nothing left to lose, the only question left unanswered is: Will “The Ram” return to the ring for the scheduled rematch with his nemesis, or will he heed his doctor’s orders and fade disgracefully into the sunset?

Though undeniably raw, realistic and relentlessly-grim, The Wrestler is also a riveting and emotionally-engaging mood piece which never hits a false note. Don’t allow yourself to be put off by the pedestrian backdrop, for the movie is likely to resonate even with folks who feel pro wrestling is phony. Credit goes to Mickey Rourke for the deep psychic pain etched in his face in every frame that makes it easy to forget that the story is revolving around a “sport” where every contest is orchestrated and the outcomes are fixed.

Rourke, in turn, shall remain forever indebted to director Darren Aronofsky who had the good sense to typecast him as a washed-up has-been desperate for a last shot at redemption, even if the role wasn’t exactly much of a stretch.

Rated R for violence, nudity, sexuality, profanity and drug use.

To see a trailer for The Wrestler,