A comic book set in World War 11, five tough guys, a circa 2010 Catwoman, a Bolivian jungle, child drug mules, a CIA betrayal, a snuke (yes, that’s now a word) and a villain who wears one glove, are the elements that make up The Losers. There’s plenty of action and attempts at humor and, although the chemistry between the five heroes never hits the mark the filmmakers tried too hard to achieve, it’s an enjoyable enough watch and definitely worth going to see just for the novelty factor – there’s not one A list star in sight. Isn’t that just so refreshing? I don’t know how Warner Bros resisted throwing in at least a cameo Tom Cruise – is it possible the big guns have out-priced themselves and the studios are telling them to get real? I do hope so, particularly as the acting in this is as good as any you’ve seen. 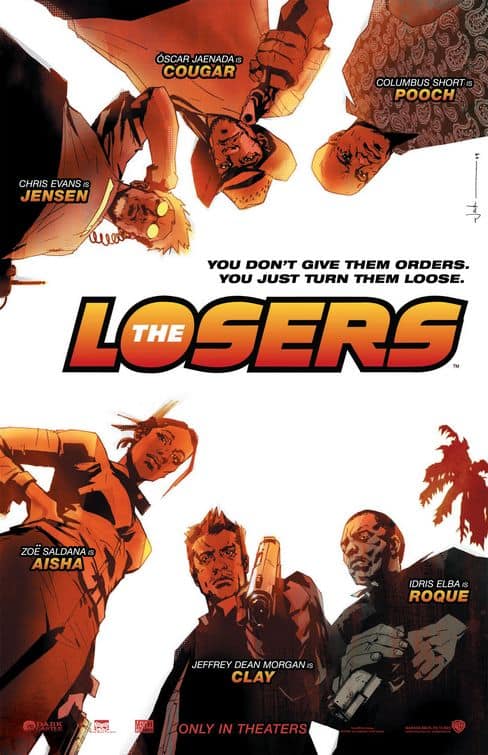 Clay, Jensen, Roque, Pooch and Cougar, members of an elite Special Forces unit, are sent on a black-ops mission (in 24, they call it ‘going dark’) to a Bolivian jungle, but after they’ve risked life and limb to serve their country an attempt is made to assassinate them. By a fluke they survive but decide it’s safer to play dead just in case Max, the top knob in the CIA who tried to polish them off, has any more tricks up his silk sleeve. After hanging out in Bolivia for a while, which isn’t as uncivilized as it sounds and the weather is absolutely spiffing, the five get approached by a gun-toting Catwoman who offers them an opportunity to get their dish of revenge. The guys get tempted, not least because she’s clearly eaten plenty of this herself and, judging by her ninety pound frame, it definitely isn’t fattening. The scene is set and the adventure begins.

Although the first ten minutes are high-octane action, it’s not completely clear what is going on until all is explained a little later by Clay; this explanation is very welcome but makes it seem as if the writers couldn’t fit it all in at the beginning, so we had to wait. It is always more interesting if the audience knows more than the characters and knowing less can be confusing and/or irritating, depending on how bad the traffic was on the way to the theater. With so many characters around, and given the sharp, succinct dialogue that the script delivers, slipping in that explanatory conversation a little earlier would have been a cake walk. It’s always possible to let writers off for a lack of surprises, but a lack of clarity is inexcusable and on this subject I have a few more questions.

Why does Max scheme to assassinate the five, where is the CIA when all this is going on, and how did Max get a job there in the first place? He’s a pretty one-dimensional bad buy and clearly rather psycho so it’s obvious he wouldn’t have interviewed well. It’s never mentioned that he has ‘turned rogue’ (I really should watch less TV) but this must be assumed as he’s dealing in cash, WMDs and has a casual attitude to the mass murder of civilians. Catwoman is equally one dimensional but I did feel sorry for her when all five heroes tried to shoot her to death when they found out who her father was. As this fact has no direct impact on anything, the shoot out is under-motivated and makes us realize that, even if you have nine lives, you still don’t get to choose your family. Darn it.

The ending is quite silly, but clearly lays the path for a hoped-for sequel, and a lot of the fight scenes play like a B-movie, which brings us to the director. Not getting the punch bits right in an action film is quite a faux pas, but when a few more extras got thrown in it made me wonder if Warner Bros had taken their cost cutting exercise a little too far. In one scene our heroes walk alongside each other, facing camera, in slow motion; if this had been done at the beginning I would have thought I was about to watch a spoof. In another scene, the action is speeded up. If the actors couldn’t move fast enough for the director’s liking he should have sent them to the gym to pump it up a little. If he had, they’d have undoubtedly bumped into the Toms, Brads and Jims, all working to reduce their stress levels at the thought of being usurped from their multi-million dollar thrones.

Ah, now I get it. That’s why Warner Bros called it The Losers…..