For those who believe that the current economic crisis brought on by shady stock market practices is no laughing matter, you’re not likely to think that the Steven Soderbergh corporate scam comedy The Informant!, is either. And with an abrupt switchup of events akin to the sort of movie where the character wakes up and everything that ensued was all a dream, this flaky financial satire turned psychological thriller is just about as dramatically unhinged as the volatile Dow Jones indicators.

Based on former NY Times reporter Kurt Eichenwald’s investigative expose bestseller, The Informant: A True Story, the film, which initially announces that every American is “a victim of corporate crime before they finish breakfast,” tracks the dubious exploits of real life suspect whistleblower himself, Mark Whitacre, played by a newly flabby Matt Damon. Whitacre, a young hotshot top executive at Archer Daniels Midland, a heartland farm staple agribusiness processing corporation, eagerly volunteered to help the FBI uncover an extensive international price fixing scheme there, while simultaneously helping himself to generous amounts of embezzled company funds. 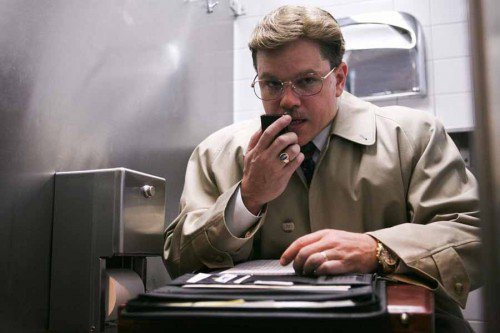 Aside from being nearly as ineffective as the FBI in his own way by failing to locate either a feasible or anchored tone to this story, director Steven Soderbergh seems to have bet on the wrong major plot point. In other words, though Whitacre as a crafty loon may hold some mild interest as the pilfering protagonist, the rap sheet on the ADM illegal exploits, especially in this age of outrageous capitalist scandals, would have made for a far more surreal shocker of a corporate crime thriller.

ADM offscreen has taglined itself as The Supermarket To The World, while boasting an internal motto that ‘The competitors are our friends and the customers are our enemies.’ The corporation churns out the oils, flours, and fibers that pad products like Jell-O and StarKist Tuna.

And ADM’s chief honcho, Dwayne Andreas, had such clout back then, that he introduced Ronald Reagan to Mikhail Gorbachev. Not to mention his unbelievably enormous influence that enabled the obesity epidemic related high fructose corn syrup to replace sugar in nearly everything we consume. Including soda that doesn’t seem to taste quite like it had before.

And nearly rivaling the Watergate scandal, the hundreds of ADM tapes secretly recorded by the FBI with the assistance of Whitacre, exposed international price fixing deals stretching around the world from Korea to Canada. And this, while felonious ADM suits are caught on tape joking about it.

But rather than focusing on this corporate crime of the century which played out in the 1990s – or at least among the ones we happen to know about, Soderbergh finds the screwed-up obsessive workaholic tendencies of Whitacre more intriguing. Such as his clock watcher efficiency pride in flossing and showering at the same time, while his hair conditioner marinates on his head and does its thing.

And Damon’s too-tame-to-tantalize monotonous narrative voiceover throughout is simply annoying, in an absurdist scam-within-a scam eavesdropper noir that needed more dramatic clout. And which really called for less lighthearted humor and a darker thrust, in keeping with the gravity of this twisted subject matter.