Promoting what could be the most malevolent prop in a Hollywood movie since terror toy Chucky, The Book of Eli tosses together gun-toting and bible-toting pathological tendencies, while more than intimating the Good Book as a handy weapon of mass destruction. At least in an emergency. And the Hughes Brothers morbidly reinvent both scripture and Denzel Washington here, the latter as a born again menace to post-apocalyptic society.

And with doomsday scenarios abounding lately on screen, from I Am Legend, 2012 and The Road, to Pandorum, Pontypool, Zombieland, Daybreakers and now The Book Of Eli, environmental paranoia as the new terrorism appears to be in full swing. That is, as a kind of pre-traumatic stress syndrome mulling humans scrambling for whatever leftovers remain. But Denzel’s Eli isn’t too worried, as he wanders across the country for the past three decades following Year Zero, armed with nifty decapitation tools and a theological photographic memory to literally die for. Just don’t even think about touching his divine property. 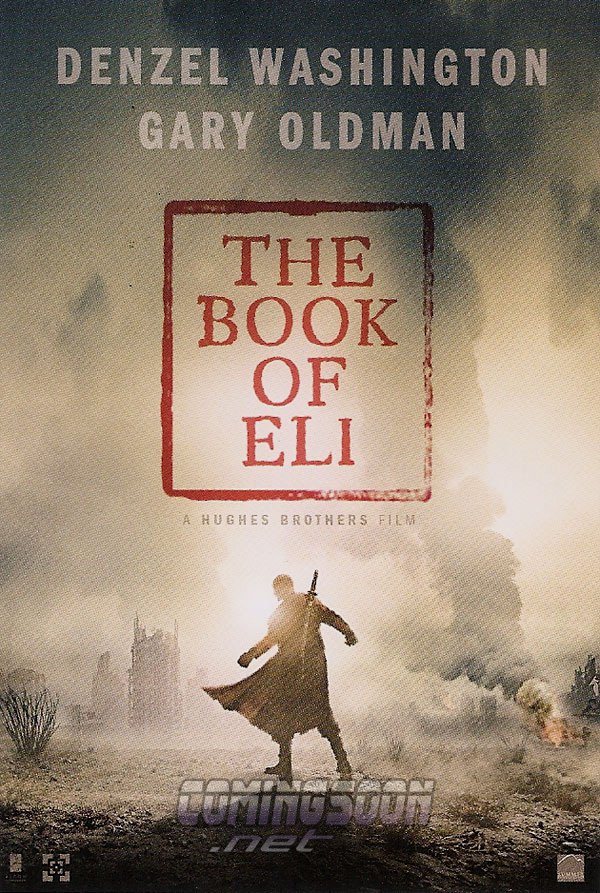 And on a planet destroyed by religious strife where bibles have been banned, guess which team that free lance homicidal messiah Eli is rooting for. This while hunting down tasty stray cats, hiding religious tomes in televisions, feeding rodents, and demonstrating his uncommon talent for sniffing out the bad guys in dusty ghost town saloons.

A crackpot blend of sadism and scriptures, and reeking with the raw scent of a fanatical fundamentalism in cool video game clothing, The Book of Eli takes no nonbeliever prisoners in its confusion of cowboy conventions and evangelical bully pulpits, not to mention preachy product placement for propaganda’s sake. As in, have you read a Good Book lately?