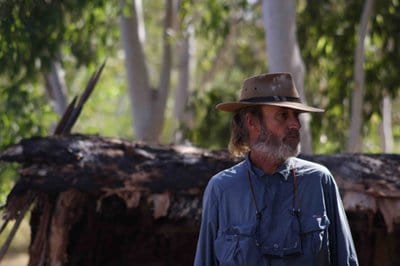 Once upon a time, about a thousand years ago, and well before the arrival of the white man Down Under, ten aborigines made their way into the forest to find just the right tree bark to build themselves some canoes. En route, it came to the attention of Minygululu (Peter Minygululu ), the elder leading the expedition, that his younger sibling, Dayindi (Jamie Gilpilil), had a crush on the prettiest of his three wives.

Even in this polygamous society, there’s a cultural commandment that thou shalt not covet thy brother’s wife. So, Minygululu decides to handle the situation a little like Scheherazade of 1001 Arabian Nights. You may remember Scher, the loquacious concubine in the harem of the Persian King, who avoided a beheading by beguiling her highness nightly with a neverending tale of romance which was a precursor to the modern-day soap opera. 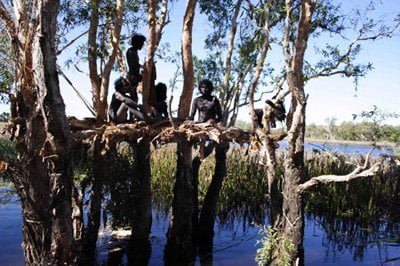 Here, Minygululu has opted to deal with his predicament by spinning an intriguing yarn which will extend for the duration of their expedition, not merely for the boat making, but also as they paddle through the swamps in search of magpie goose eggs. His goal is to get his bachelor brother’s mind off adultery by relating a cautionary tale which ought to teach the post-pubescent lad to be more respectful of the tribe’s ancestral ways.

This is the basic idea behind Ten Canoes, the first, Australian full-length feature shot in an indigenous tongue. The characters’ dialogue has been augmented with the voice an English-speaking narrator, which has the effect of imbuing the production, periodically, with the feel of an issue of National Geographic come to life, given the absence of modesty among the cast of carefree natives who cavort naked in every scene. 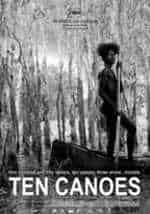 Provided you’re not Puritanical about frontal nudity, this powerful picture based on a myth is otherwise a delight, and a cinematic preservation of a so-called primitive people’s oral tradition.

In Yolgnu Matha and English with subtitles.