A director lacking the courage of his convictions is nothing new. But when this notion is paraded around in a movie about an insane asylum under siege as a narrative device, let alone a bait and switch teaser playing around with viewer heads, let’s just say it’s enough to drive audiences insane too. And Martin Scorsese’s Shutter Island, the second gothic Boston island retreat thriller released in the same week by a seasoned director, along with Roman Polanski’s The Ghost Writer, may very well indicate just how isolated, metaphorically and otherwise, even veteran acclaimed filmmakers can be.

Turning up in Shutter Island with a similarly self-conscious Boston accent as Mel Gibson’s current likewise anxiety ridden Beantown investigator, is Leonardo DiCaprio as US Marshal Teddy Daniels. And in a very different kind of much more than literally out to sea terror ride as Titanic but every bit as bleak and agitated, Daniels is summoned to Ashecliffe Hospital for the criminally insane on desolate, hurricane swept Shutter Island. His task is to figure out how a homicidal woman (Emily Mortimer) who murdered her own children, managed to escape a locked ward and disappear. Accompanied by his more cool headed and laid back partner Chuck (Mark Ruffalo), Daniels embarks on a nerve jangling journey into mass institutional madness possibly including the dubious on site practitioners, and which slowly comes to put his own grip on reality to the test. 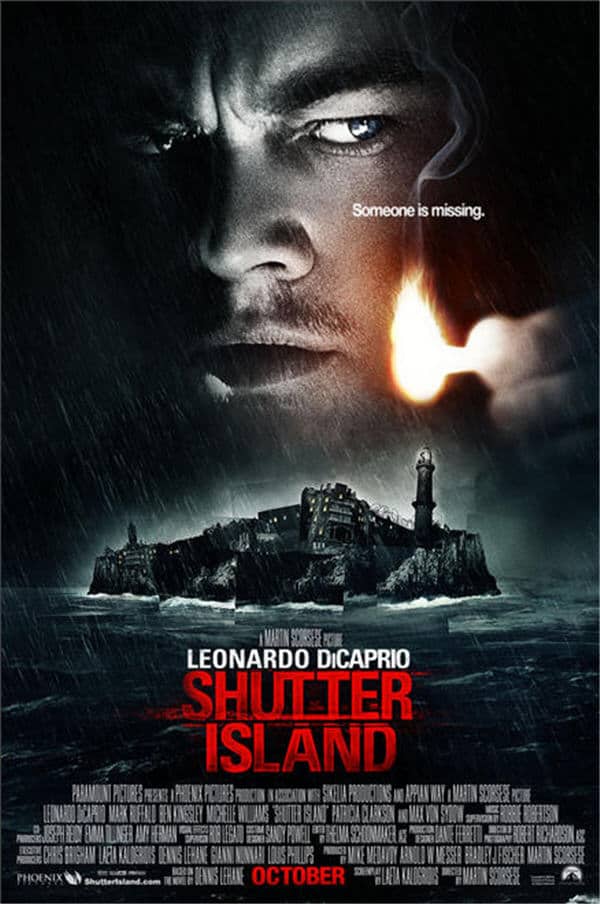 Adapted from novelist Dennis Lehane’s bestseller of the same name, Shutter Island plays out in 1954, immersing the narrative in both real and imagined paranoid inclinations. And touching on the repressive national period tendencies of McCarthyism, and frightening new experimental psychiatric procedures like electric shock (which figured so alarmingly in Changeling) and the transorbital lobotomy administered through patient eyeballs. And converging with World War II vet Daniels’ own post-traumatic disorder combat nightmares.

As the detective is swept up into a deepening, depraved scenario in which he fears his own imminent incarceration by suspect shrinks (Ben Kingsley, Max von Sydow) because he may know too much, Daniels begins to doubt his own sanity. This, while fleeing assorted lost and found psychos, born again Nazis, and Red Scare gulag rehab for unrepentant communists on the loose.

Unfortunately, the movie increasingly feels as schizo as the patients. And this offshore Boston spun, basically ‘just kidding’ yarn in which the filmmakers more so than even the inmates seem to have taken over the asylum, doesn’t amount to a hill of, well, baked beans.