This drama documents the events surrounding the downfall of President Pinochet, dictator of Chile from 1973 to 1988. As a drama, it fails, but the events the filmmakers depict are so powerful that the images create a story all of their own. Truths are encompassed by themes of stolen civil liberties and, abomination by abomination, this tragic era of Chile’s history is faithfully drawn.

Augusto Pinochet comes to power by overthrowing a democratically elected government in a bloody coup. He dissolves Congress, scraps the constitution, bans opposition, arrests trade unionists and imposes controls on the media. His reign of terror grows, with thousands of innocent citizens becoming victims of state-sponsored murder. By 1988, the US, his strongest ally, can no longer turn a blind eye, and Pinochet is forced to hold a referendum on his presidency. The country can vote ‘Yes’ to another eight years of his rule, or ‘No’ to end it. Both sides are allotted a daily 15 minute television broadcast, and it is upon this that the future of Chile will rest. The ‘No’ party quickly assembles its fighting force, and an idiosyncratic advertising executive named Rene Saavedra (Gael Garci Bernal), is appointed to spearhead their campaign. 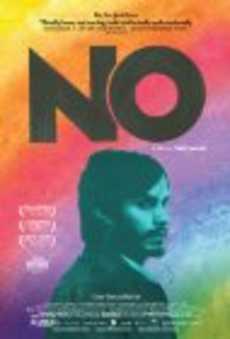 The most entertaining moment in this film is when the ‘Yes’ party suddenly discover that they are in danger of being outsmarted by the ‘No’ party, who are the undisputed underdog, with a miniscule budget and zero power. At this point, the audience has already realized that Goliath might have a problem, and it is most satisfying to witness the mighty squirm. This ying and yang is what could have propelled the story forward, and created a virtual scoreboard for a game being played on the international stage. Instead, however, events unfold with no impact on the next, no ticking clock, and a specific finishing line is never defined.

Realistically, creating 15 minutes of footage every day is a challenge, but this never seems to be an issue, so tension is often at a low ebb. Intimidation by the despot’s secret police is frequently felt by Rene and his team, but there is no escalation, no creeping sense of danger that the more they succeed, the greater danger they will be in. There is also no cost attached to failure, which would be high. Once the world press leaves, the failed opposition would have the full attention of a tyrant, who is infamous for political torture and “desaparecidos”; the ones who simply disappear.

The story ends, as it should, when the referendum results are in. However, in 1998, while Pinochet was in the UK, the Spanish government sought to put him on trial in Madrid for the deaths of its citizens in Chile. The UK, more specifically, Mrs. Thatcher, prevented his extradition, and another drama was born. The stakes aren’t as high as the freedom of an entire nation but, with English bedfellows, a Spanish inquisition, and a little Latin American mystique, a sequel surely beckons.