This is a low-budget film with great production values, a perfect setting, a talented cast but, unfortunately, not much else. An endless barrage of creepy cliches are thrown relentlessly at the meandering plot, but none are made sense of, or connected, or even explained. This lack of coherence gives a kind of ‘horror coated’ feel, with no big scares, no edge-of-the-seat moments and nothing to stop you from having sweet dreams.

Bea (Rose Leslie) and Paul (Harry Treadaway) decide to spend their honeymoon at Bea’s family holiday home. The house faces a lake and is surrounded by dense forest. The two arrive in high spirits but their joy turns to confusion when Paul wakes in the dead of night and finds Bea wandering in the woods, naked and disorientated. After this, her behavior becomes more and more bizarre and the idyllic honeymoon slowly loses its charm. 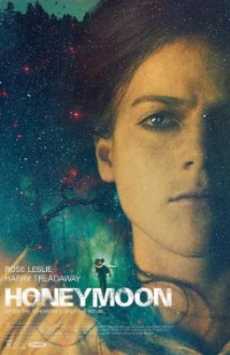 The first 15 minutes of this film are spent showing us how much in love the newly-weds are and what amazing sex they’re having. They giggle a little too often and tedium sets in as the same ground keeps getting covered, over and over. These opening scenes should have been used to familiarize the audience with the people they’re going to spend the next 87 minutes with, but not even the tiniest insight is given and the two are like strangers, from beginning to end. This lack of connection makes it difficult to become engaged and to actually care how the young couple’s fate will eventually play out.

Obviously, when watching a horror movie, we have to make allowances for people acting in dangerous, foolhardy ways, but this movie takes this disbelief in quite another direction. Paul decides to visit a neighbor because he believes the neighbor has something to do with Bea’s strange behavior. He lets himself in, looks around, then sits down at a computer and starts clicking around. Really? Would anyone in the world actually do that? After a few moments, he stands back up, takes another look around and leaves, at which point a man’s shadowy outline appears, accompanied by a very loud drum roll. It was quite a moment, but as you can imagine, not a good one.

Fans of this genre might glean some enjoyment from the creepiness, and cabin-in-the-wood settings have an enduring appeal, but there’s also a possibility that this release might be missed altogether. The promotion cover is simply a photograph of Bea and could be identified with practically any genre, particularly drama and least of all horror. The unimaginative title does nothing to help, and when audiences are trawling through the new arrivals, it’s very unlikely that this one will attract the Kruger Crowd, who will probably just browse on by.