A cross between a vampire afterschool special and an undead soap, Let The Right One In is a biting blend of minimalist arty antics and awkward adolescent oral fixations with fangs, but one that soon wears thin. Directed by Tomas Alfredson, and written and adapted by John Ajvide Lindqvist from his novel, this macabre mood piece that could have been alternately titled Oskar And Eli Make A Vampire Movie, is a wintry Swedish tale featuring perhaps the most drowsy, hypothermic vampire behavior ever.

Oskar (Kare Hedebrant) is a sensitive suburban Stockholm preteen living with his single working mom in a dreary housing complex forever blanketed with snow. He divides his time between warding off vicious school bullies and collecting newspaper clippings about gruesome murders, while secretly contemplating similar deeds against his matriculated tormentors. When new next door neighbor Eli (Lina Leandersson) moves in, a mysterious girl his own age, Oskar’s curiosity leads him to spy on this recluse who only comes out at night, reeks of blood, runs around barefoot in the snow and eventually appears out of nowhere through a window to crawl nude into his bed, though on a strictly sexless, platonic basis.

Eli also hangs out in trees, sleeps in her bathtub, teaches Oskar how to communicate through the apartment wall in Morse Code, and is apparently an impressive high IQ vampire who really knows her Rubik’s Cubes. And though Oskar is a bright boy too, his cluelessness about Eli until way into the movie when she laps a bit of his blood off the floor, is exasperating and the only real suspense in sight. There’s also a fragment of political commentary injected but never developed, about this mid-20th century vampire scourge having something to do with the Soviet Union crossing borders to aggravate its Swedish neighbor with communist immigrant bloodsuckers. Oh never mind. 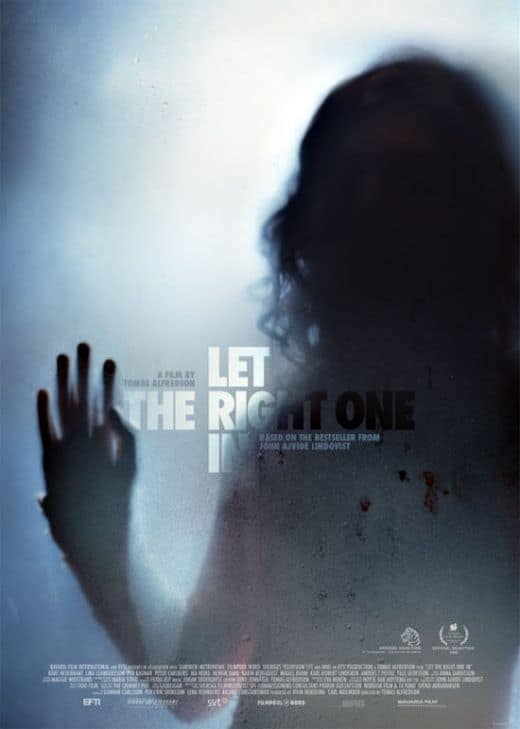 The film does offer some limited insight into how to efficiently crack necks after biting and draining them, though this famished femme fatale’s dining etiquette leaves much to be desired, as she never bothers to wipe her mouth after feasting. The story also intimates on an irrelevant side note, that gender behavior may have strong environmental roots, as this aggressive young female is being raised by her single father, while a more effeminately inclined Oskar receives primary parenting from his single mom. Not that a tomboyish vampire addiction for a girl who confesses to having been ‘twelve years old for a long time’ should be necessarily misconstrued as the result of a lack of maternal nurturing present in the household.

Let The Right One In does have some strikingly surreal scenes, though few and far between. Ultimately, whether or not this film is your cup of bodily fluid, will depend on your preference for vampire movies as a dish best served cold. A coming of ageless (in vampire years) prepubescent love story of sorts, which like the country, climate and connected local mood in question, favors lethargic introspective vampires and couch potato undead, in deep freeze.